Do you know how caviar is produced? This exceptional product comes from a prehistoric fish, the female sturgeon, raised en masse and killed around the age of 8 or 10 years in order to collect their eggs.

François René, an agricultural engineer and research director at IFREMER, a specialist in aquaculture reproduction, was convinced that it should be possible to produce caviar in a more humane way, and took advantage of his early retirement by embarking on an innovative experiment: removing a sturgeon's eggs by Caesarean section and thus allowing the fish to live longer, from 50 to 100 years on average.

Thanks to the arrival of his son, Frédéric, on the project, his idea became reality after four years of research. René says he achieved "100% survival of sturgeons after a delicate operation but the least invasive possible for the animal, allowing the fish to continue to produce eggs throughout its life". 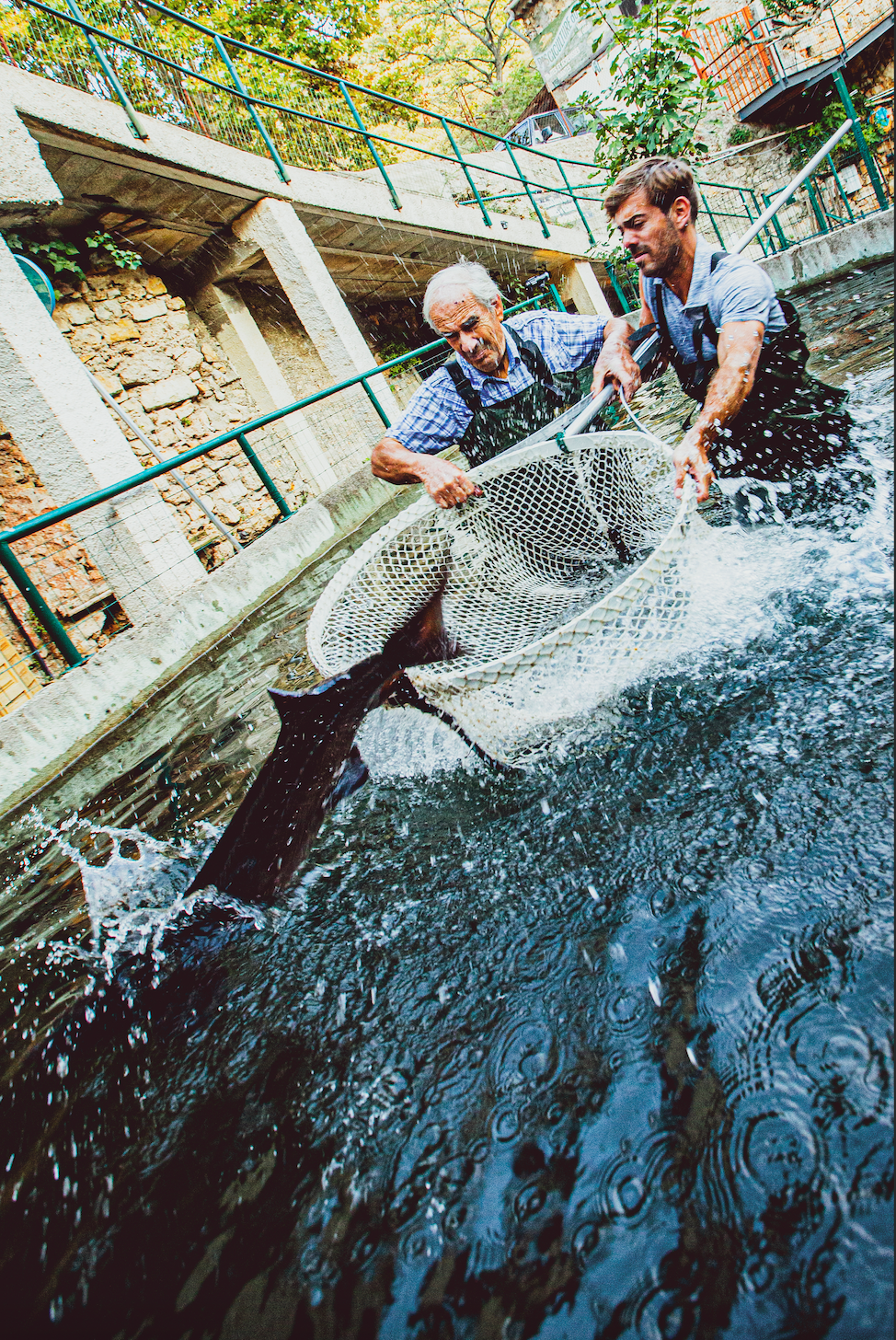 On the strength of their discovery, father and son set out to produce caviar in Saint-Guilhem le Désert, in the heart of Occitanie in Southern France, in 2019. It is in this atypical place with an artisanal allure that René and his team breed sturgeon in basins of pure water, with a very low density (no more than 20kg / m3), and feed them with food from agriculture; organic without flour of animal origin. "We supplement this diet with a little cod liver oil, which is essential for their omega 3 intake," said a spokesman for the Caviar Castillonne team.

In order to remove their eggs they perform a small caesarean section on sturgeons of around 8 years old under a natural anaesthetic in cold water. The fish are then returned to the water and resume the course of their life, before being operated on again in two years. This cycle continues until the females no longer produce caviar.

Then, instead of Caviar Castillonne killing the sturgeons that will no longer produce eggs, the fish are instead transferred to resting pools to live out a quiet 'retirement'.

Once the eggs have been collected, the producer refines the caviar for several months, to give it more aroma and a longer flavour in the mouth, as well as the buttery texture popular with gourmets.

The great palates of the region are not mistaken since the three-Michelin-starred chef Gilles Goujon and even Stephan Paroche from Château Castigno now use the caviar to prepare their dishes.

Castillonne caviar is also available for sale for individuals and the fish basins can be visited during a stay in Occitania.

Fabrizio Caponi: "For Me, There is No Other Future"

Fabrizio Caponi of Osteria l'Ciocio in Suvereto, Tuscany, is digging into the past to find a better future for food. Discover what the chef had to tell us.
Article
Italian Cuisine

The Italian New Wave in Bangkok

Despite the difficulties due to the Covid-19 pandemic, restaurants in Bangkok are discovering new gastronomic experiences, including those offering traditional Italian cuisine.
Article
Food Spotlight

The Best Recipes for Christmas Appetisers to Make Ahead

The ideal English muffins are lightly toasted. You can just slice them in half and put them in the toaster, but we prefer the oven-toasting technique. You can also learn how to make English muffins at home before putting them in the oven by following our simple recipe.
Article
French Recipes

See the full list of the restaurants with stars in the city with the most Michelin stars, in the Michelin Guide to Tokyo 2022.

The San Sebastian International Film Festival is back with a feast of new food films to enjoy. Take a look.
Article
Food Culture

Take a look at the trailer for 'Wolfgang', the true-life story of the US celebrity chef, directed by David Gelb.
Article
Food Culture

The British actor will take on a lead role as an acclaimed chef cooking up a lavish tasting menu in a new psychological thriller.
Article
Food Culture

The long-awaited, rescheduled UEFA Euro2020 football championships are upon us, and to whet your appetite, we have selected our starting XI of the best restaurants in the world owned by footballers. See who made our first-team.
Article
Food Culture

More and more states in America are legalising marijuana in various forms, leading to an increasing number of top chefs and food professionals coming up with inventive ways to elevate their edibles. Here's a round-up of the best.
Article
Food Culture

14 Bulgarian Dishes you Must Try

A Menu for New Mothers: A Look Inside a Postpartum Hotel

Across Asia, the tradition of postpartum care known as confinement is still quite common for women who have just given birth, and it usually includes a specially prepared healthy diet. This hotel in Singapore takes it to a whole new level.

Josh Niland: "My Responsibility is to Educate a New Generation of Chefs"