Design and food are two elements intrinsically interwoven, whether in the aesthetics of a dish, fine chocolate, haute cuisine events or exhibitions.

The Swiss designer Carolien Niebling, however, takes the concept to another level – in collaboration with master butcher Herman Ter Weele from Oene, Netherlands and the molecular chef Gabriel Serero from Lausanne, Switzerland – she has given life to a new project that redefines the concept of food and design, in this case, the sausage.

“Sausage is one of our oldest created food items”, she tells Fine Dining Lovers. “I saw the possibility to use the design of the sausage as a medium to eat less meat starting now and not waiting for the scientists to provide substitutes or grow our burgers.”

So, in the last three years, Carolien has worked to develop alternative sausages, realizing them as an edible design object. The whole research project will be captured in a book, The Future Sausage that will be published, if it achieves its current crowdfunding campaign target (closing on 14 May).

To find out more about what the future of sausages looks like, we caught up with trio behind the project to ask them a few more questions, starting with Carolien:

How and when did The Future Sausage project come about?
I started the project around 3 years ago for my École cantonale d'art de Lausanne graduation, after reading about the toll that our meat consumption was having on the environment and that insects were being explored as a new western protein source. Consumers need to understand that we have to eat less meat and not continue consuming at the same pace using fake substitutes that taste the same.

Can you describe the concept of the “future sausage”?
The concept is to eat less meat starting now, and not waiting for other solutions to arrive. But also to elevate the design of this somewhat mundanely perceived food item and introduce different edible ingredients that we might have forgotten or that need to be introduced like, grains seeds, plants, insects, nuts, etc. Our production chain is still very much based on animal protein, but why do we waste such a large amount? Let’s eat nose to tail and start reducing the number of animals we eat.

Which roles did the chef and the butcher have in your project?
Gabriel, the Swiss molecular chef, was a source of knowledge because he is specialized in gelification and textures. He helped me create a nice texture-out of the insect flour turning it into a smooth paste. Also, he helped a lot by putting together the right flavors to elevate the aromatic composition of the sausage.
Herman is a butcher from the Netherlands so it was not easy to travel back and forth from there for the testing sessions but he never said “no” to any of my crazy ideas, such as working with live worms. He even experimented with extruding vegetable puree into the fresh sausage in such a way that they would look incredible, but unfortunately, it was too time-consuming. Next, we found out from the two specialized professionals, a molecular chef, and a butcher, why they decided to engage in Carolien’s project. Herman Ter Weele answered to Fine Dining Lovers: “It was interesting for us to look at sausage production from a different perspective. I think meat will become a luxury item and an expensive material, so we should not close our eyes to new development.”

“The project questions were very interesting”, says Gabriel Serero. “How can I replace meat? How can I replace protein? How can I create a new view of sausages and give the same pleasure, indulgence and use less meat? The project has different entry points: protein, texture, colors, and shapes. But it’s also a fermentation process, a traditional approach. The project is clearly based on a sustainable approach to consuming and how we have to face mother nature.” 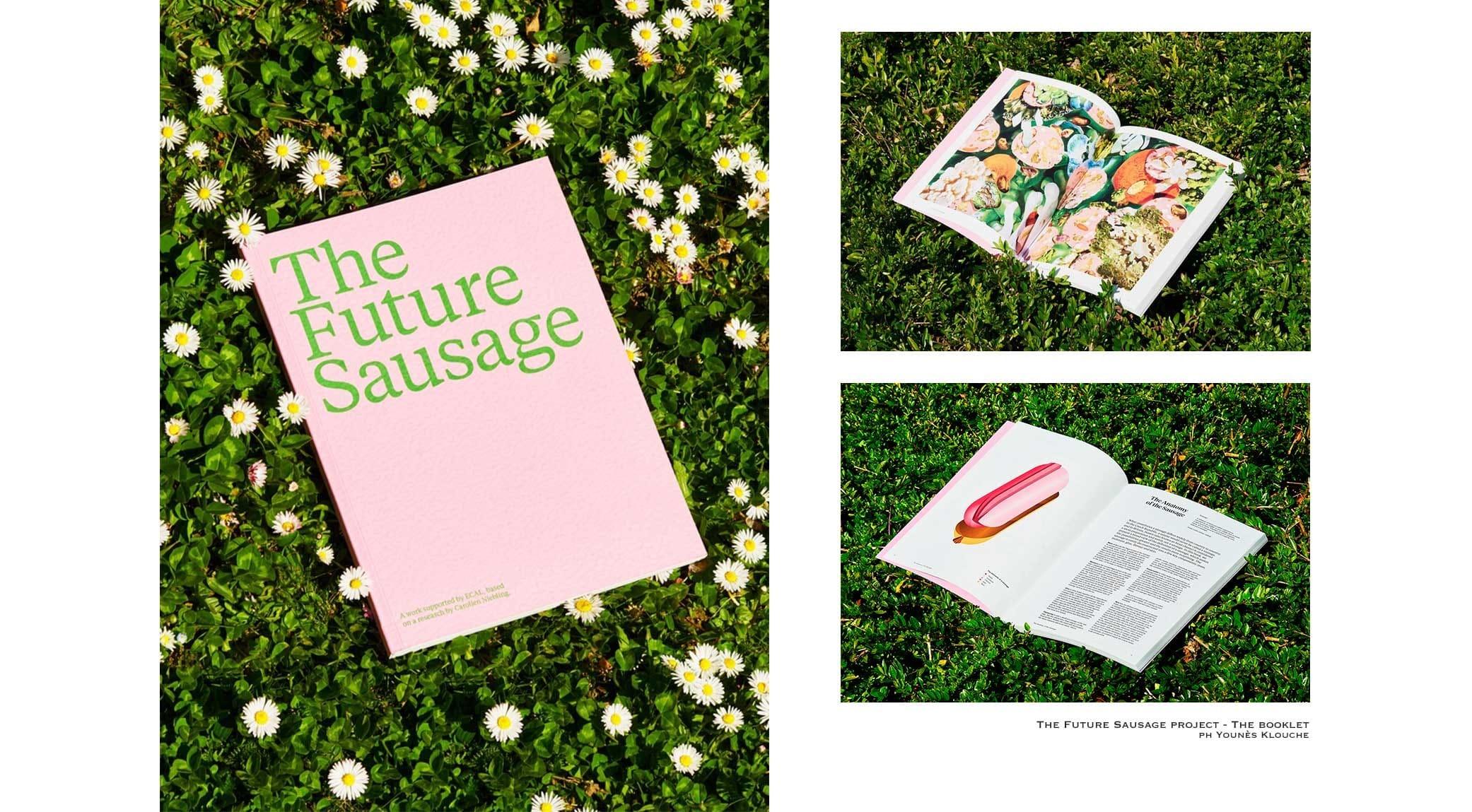 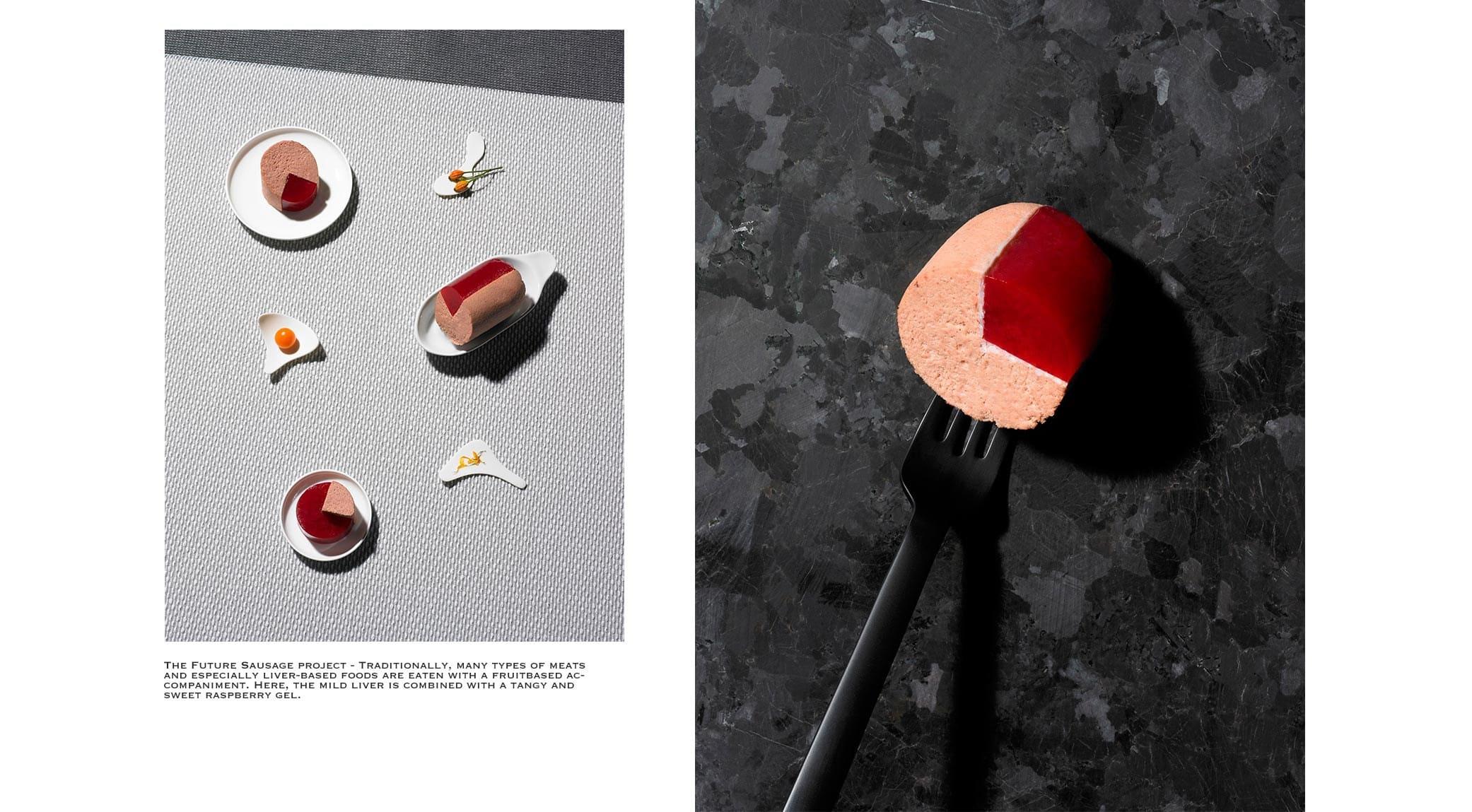 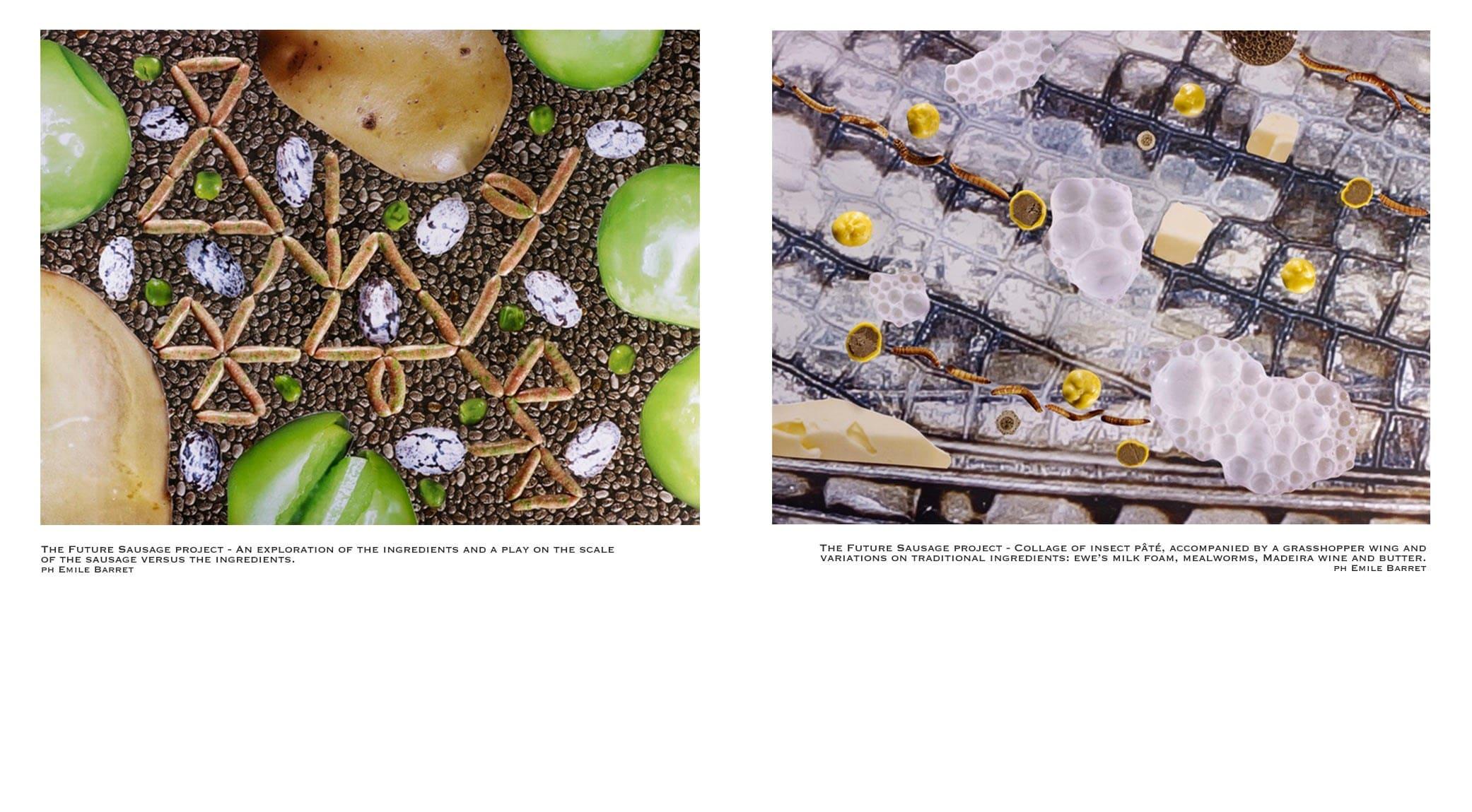 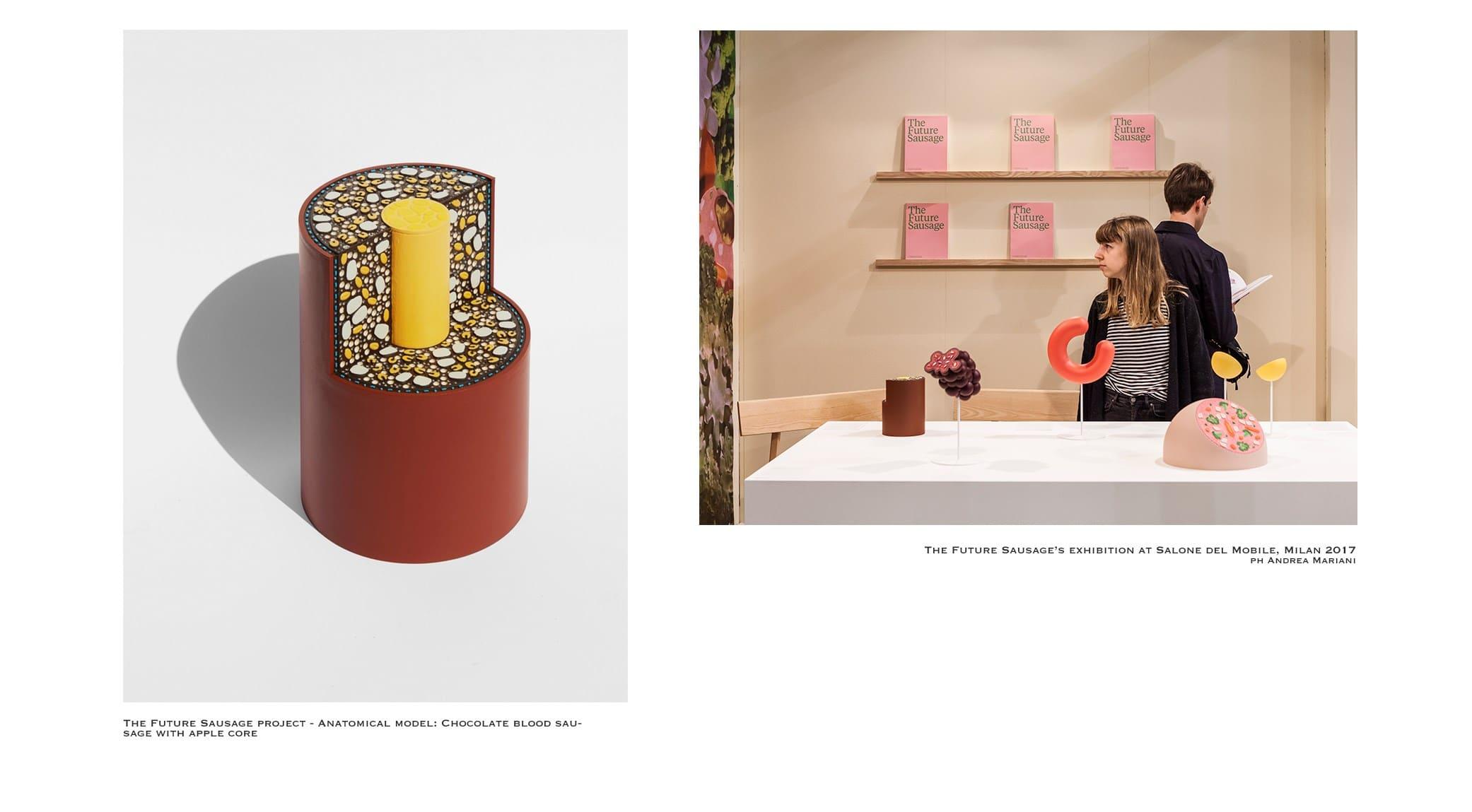 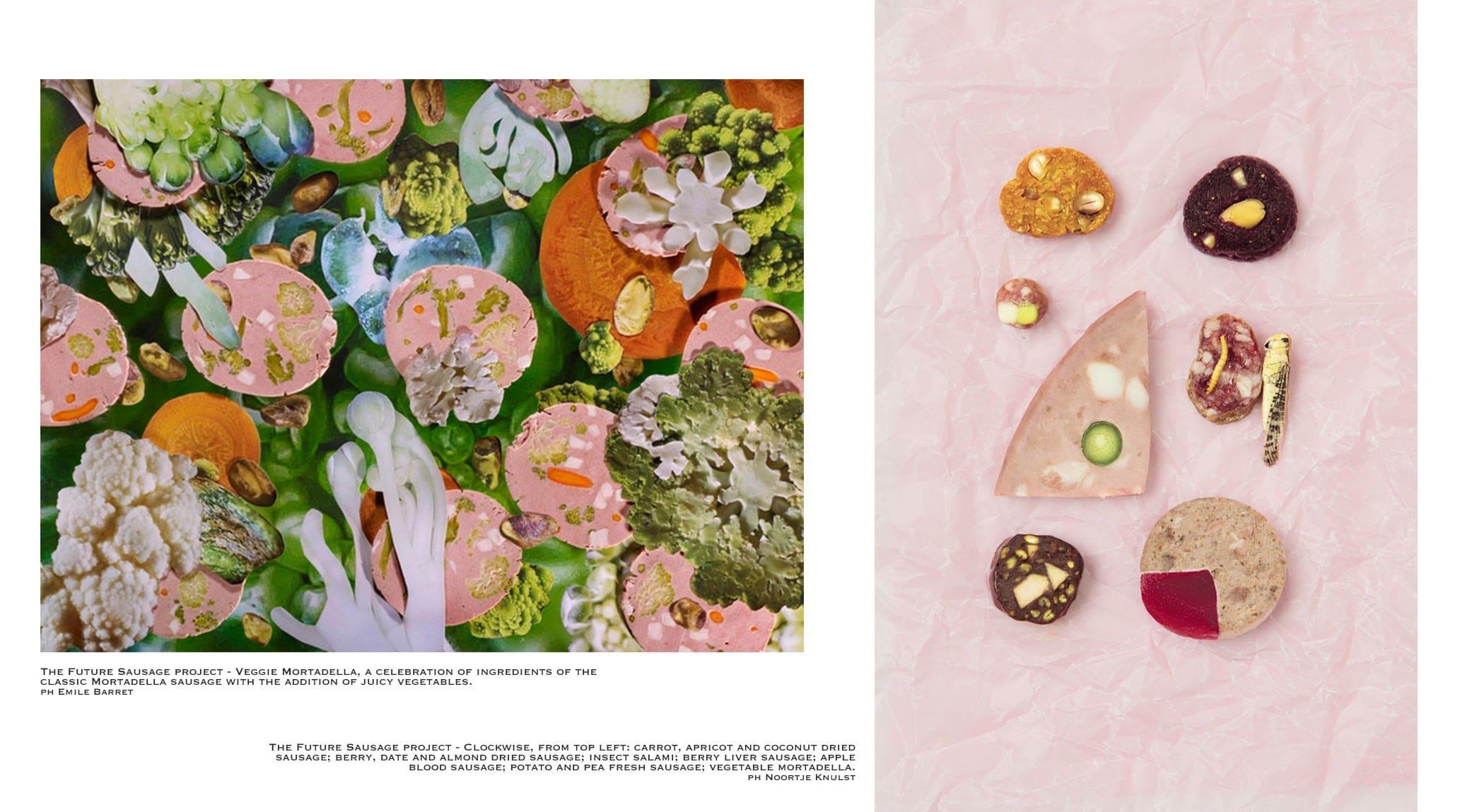 What is the percentage of meat in each sausage? What is the rest composed of?
H.T.W. The meat percentage was around 65% in the sausages we made.
G.B. What is meat? Is insect flour considered meat? The objective is to have less meat and even no meat at all. Other than meat, there were insect flours, vegetal protein like lentils or chickpeas and also vegetables or nuts. I worked on taste and texture. The problem with insects is that the taste can be strong and also because they are psychologically hard to accept, the taste has to be wonderful.  Insect flour will be ok in a few years, but it will take more time to have roasted cockroaches next to a traditional salami.

What would you like to see happen as a result of the publication of the book?
H.T.W. It would be fantastic of course if some large sausage manufacturers would start to work with the book as a guideline, so some of the sausages could go into production.
G.B. As you can see worldwide, meat alternatives are more and more of a must. The objective for me as an epicurean is not to eradicate meat but to eradicate intensive production. We have to change the way we see food very quickly or in 50 years there will be nothing to cultivate, nothing to raise and no more beauty and poesy.

How do you think the project will evolve?
It’s already evolving because I have been invited to several food events to give a lecture or a workshop: I’m happy to share this knowledge with the world and mostly with the butchers. I am also starting to engage with sausage manufactures: having some sausages I developed out there would be amazing.