As usual, this year’s edition of the Milano Design Week has satisfied the highest expectations: from 4 to 9 April, a densely packed program of events, exhibitions and meetings focused on the variegated world of design were held all over the city, from the design district downtown to the actual Salone del Mobile, at the trade fair pole of Rho.

To recount this event to the readers of Fine Dining Lovers, we have selected a series of projects which all feature plates: a simple yet essential object to be found in everyone’s kitchen, from the professional workstations of great chefs to private homes. The photo gallery contains some interesting and inspirational ideas. Our journey starts with the project called La DoubleJ. Housewives, the new series designed by JJ Martin which adorns the table with vintage prints in bright contrasting colors. Flowers, peacocks, and geometric shapes characterize this project, fruit of a collaboration with two Italian firms: Bitossi for the dinner service set and Mascioni for the linen fabrics used to make the table cloths, placemats, and napkins. 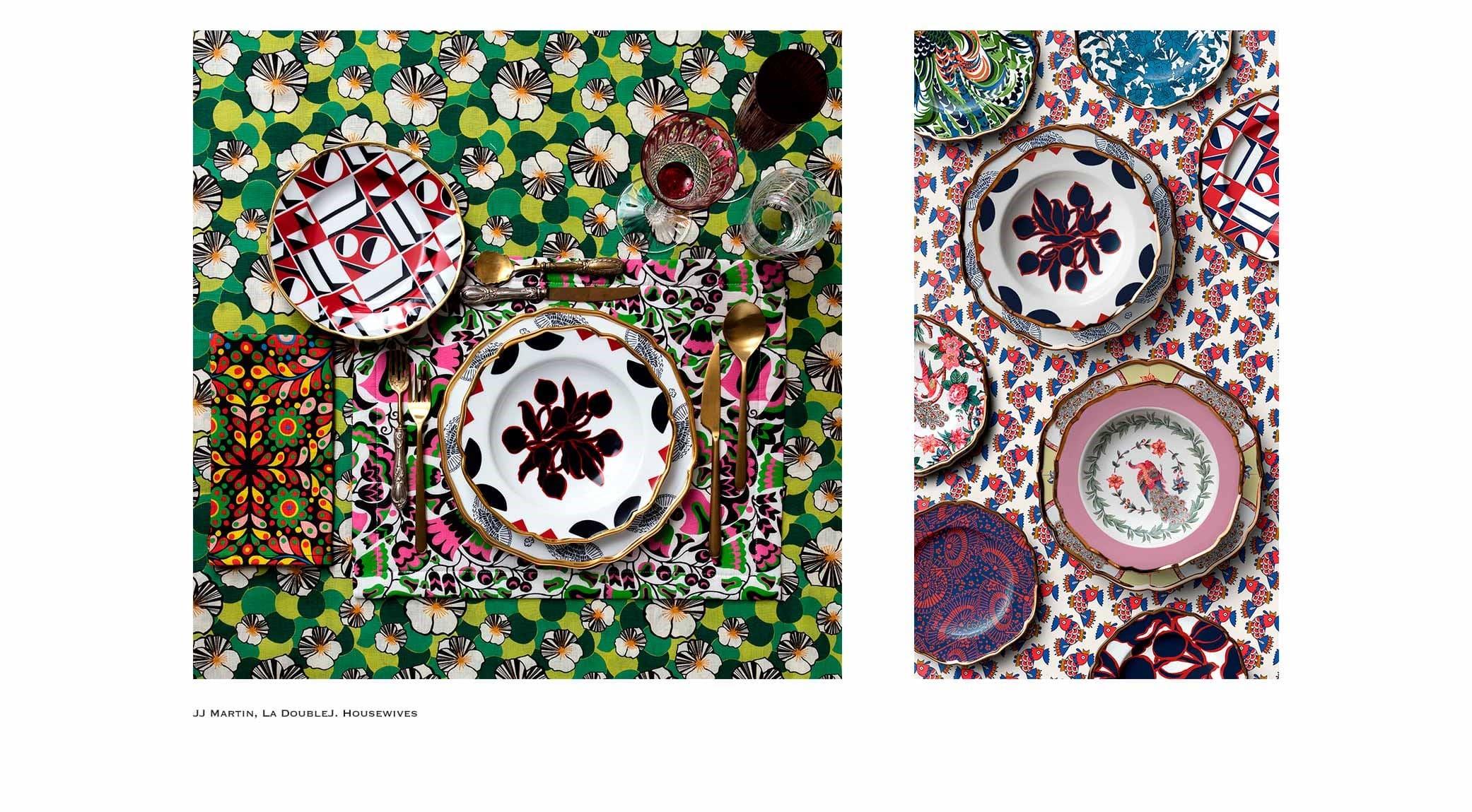 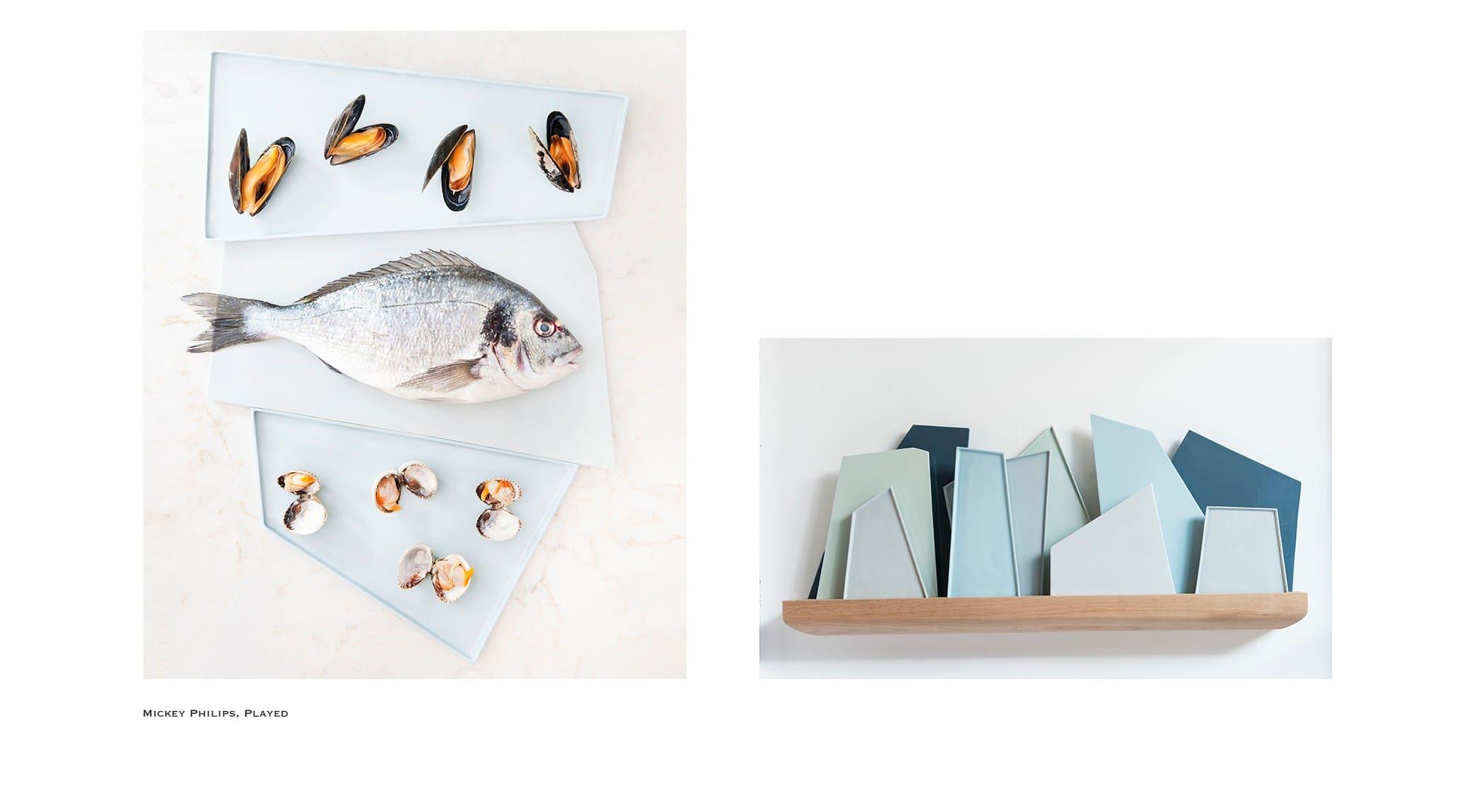 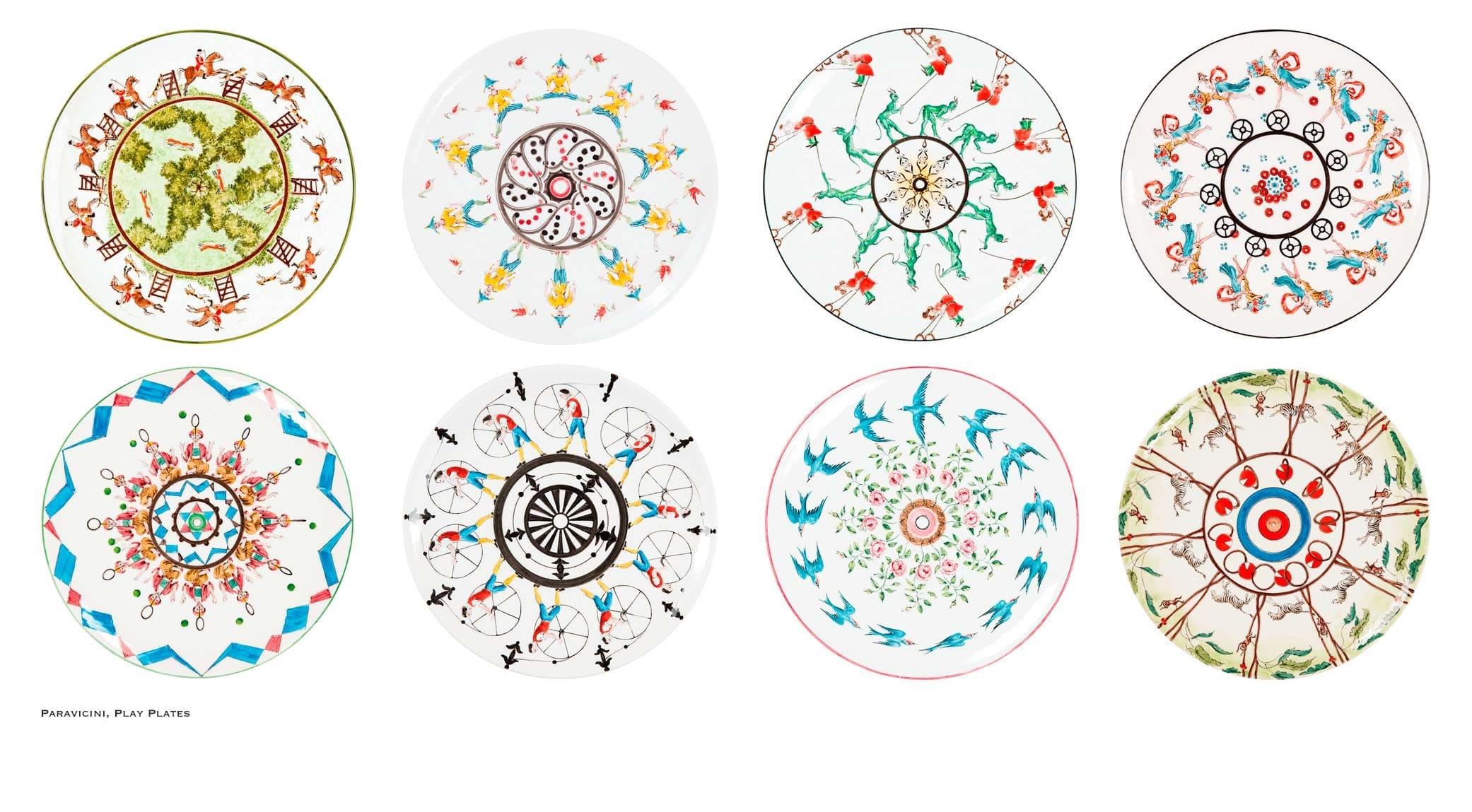 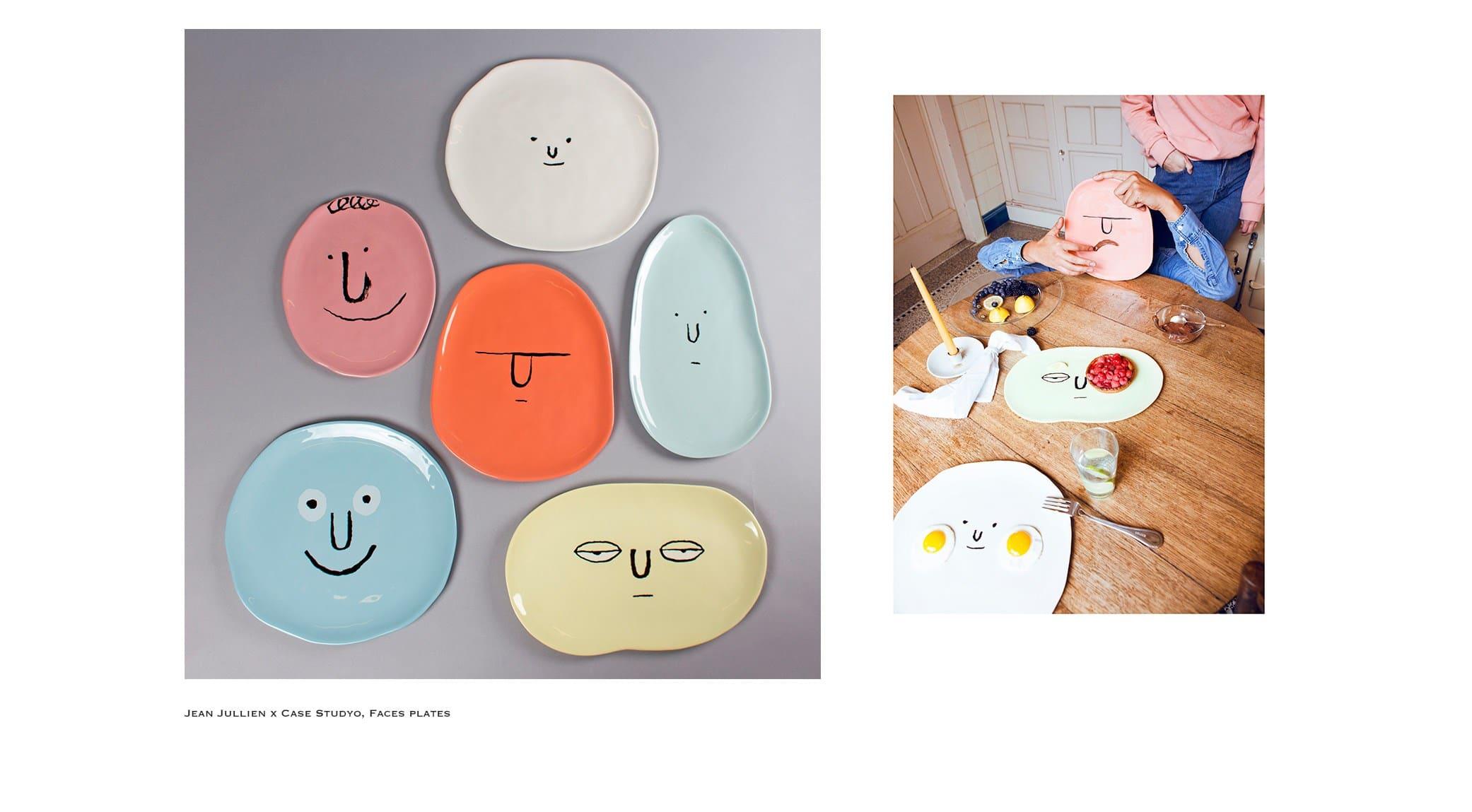 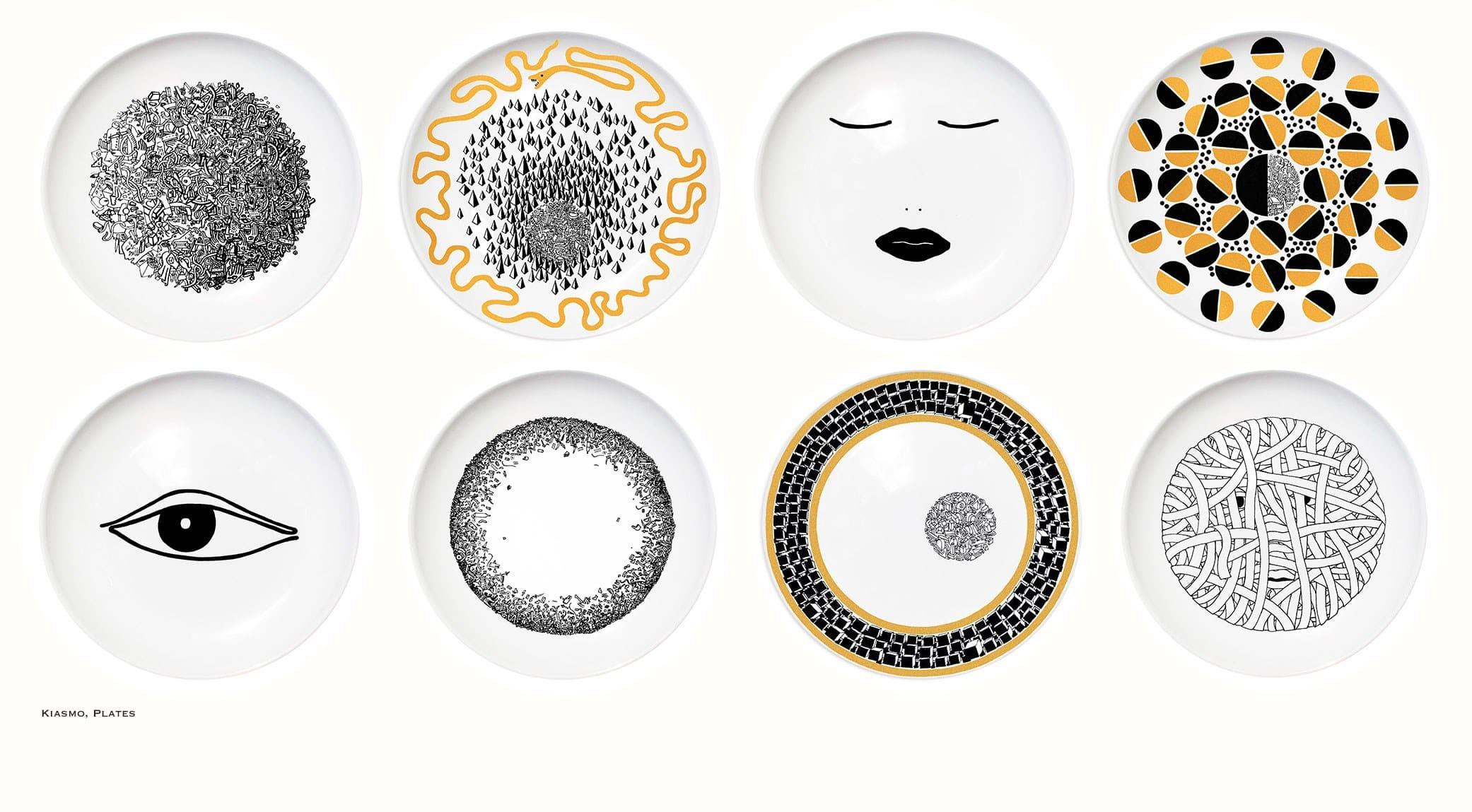 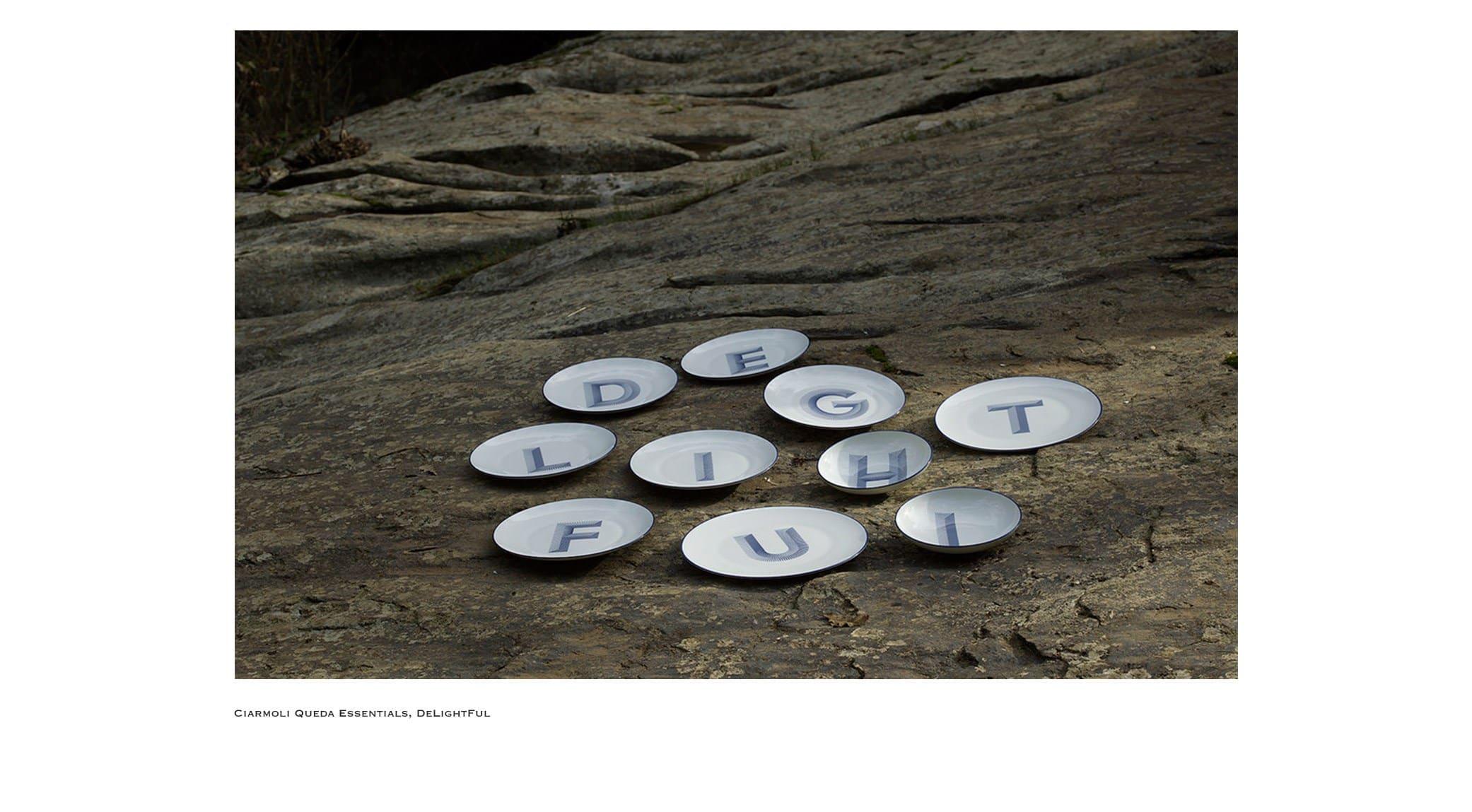 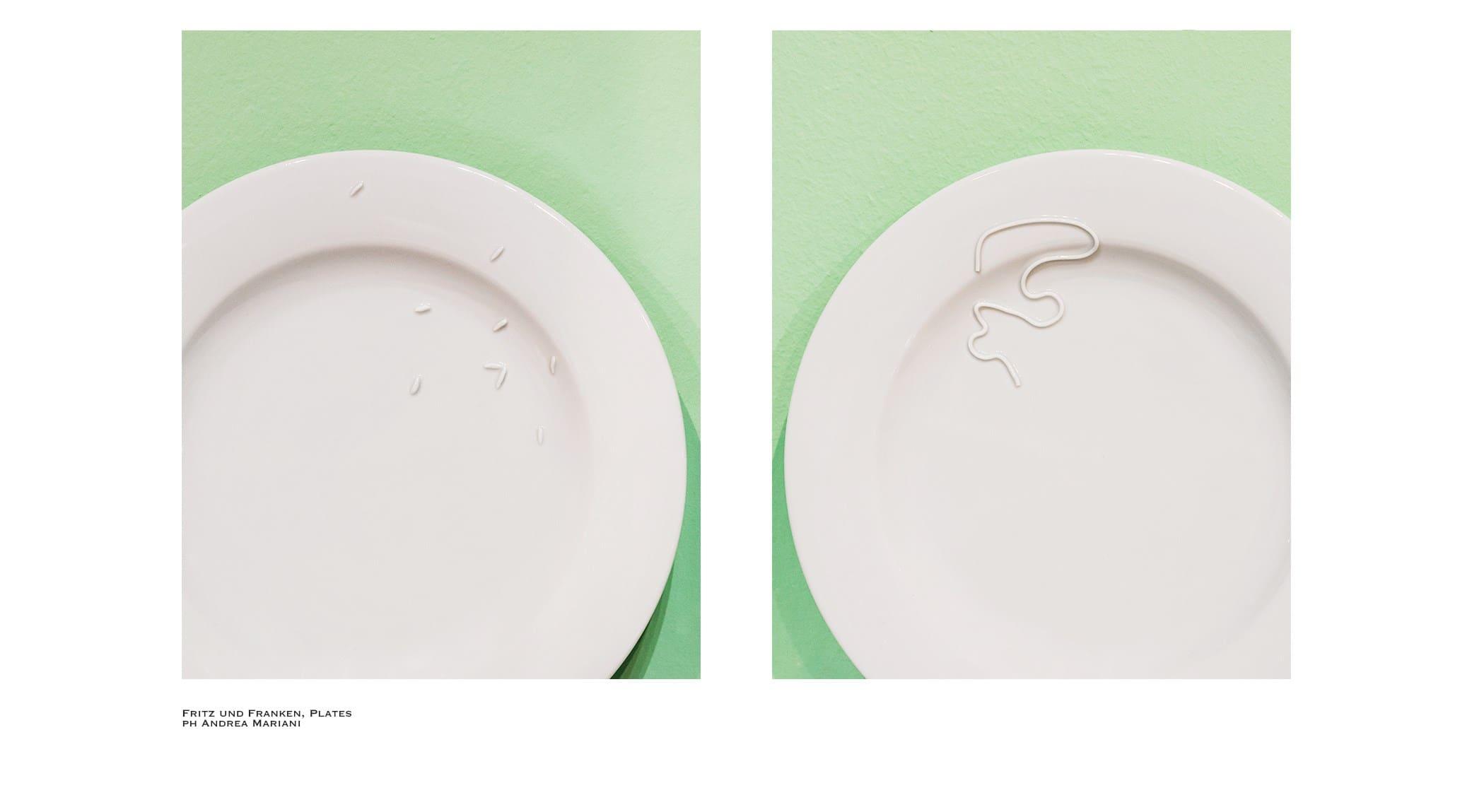 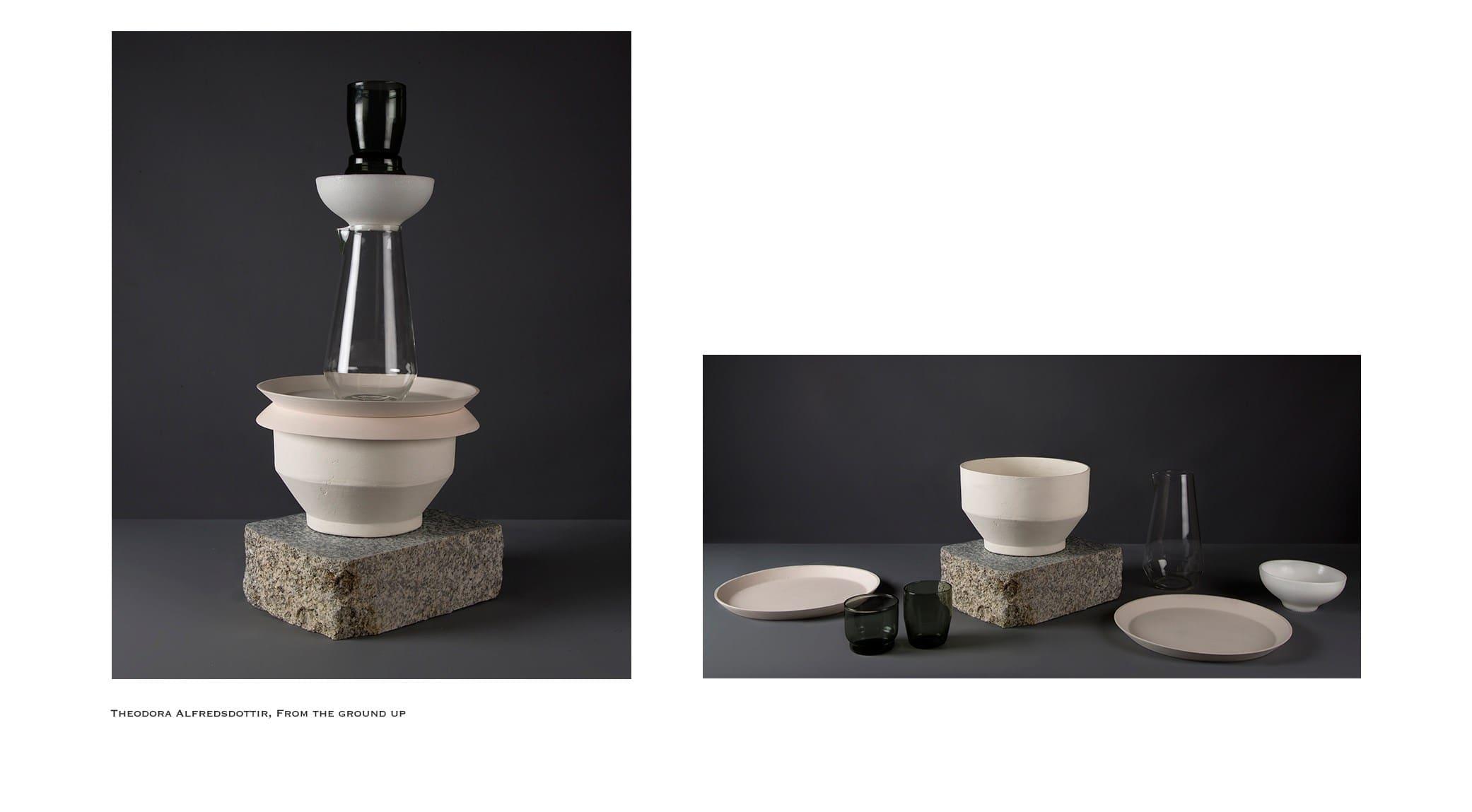 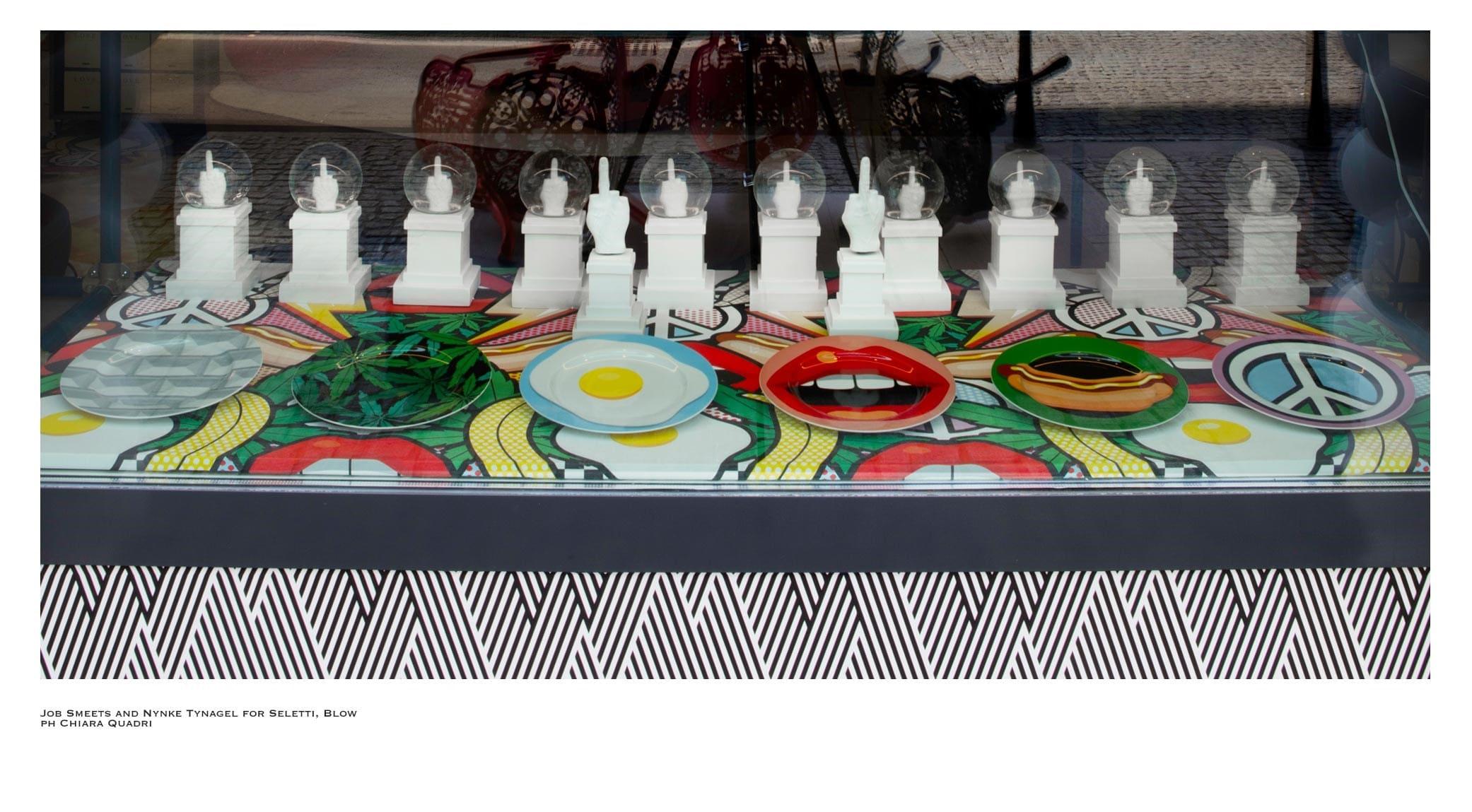 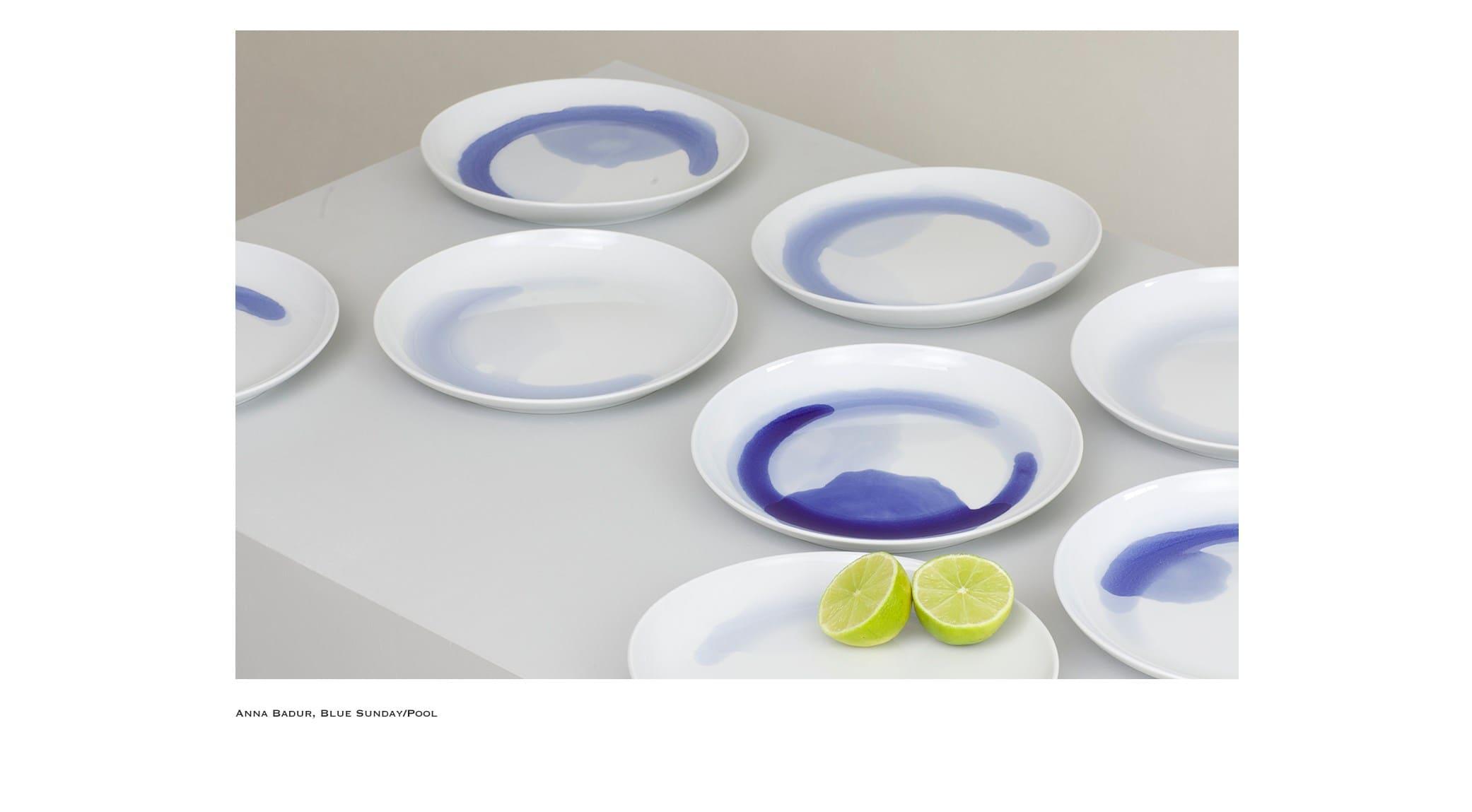 One of the novelties of Fuori Salone 2017 was the project titled Hungry for Design which was staged in the new MuVaC design district (set up in and around the streets of Muratori, Vasari, and Corio) in Porta Romana, and which put the spotlight on the close bond between food and design. A group exhibition of European designers displayed some unusual interpretations of commonplace everyday objects in which the relationship between food, form, and function was questioned. In this context, there was also a presentation of the work by designer Mickey Philips, who has signed Played: a set of serving dishes that fit together like a puzzle made up of differently shaped and colored pieces.

Fun and playful are also two terms that well describe the new set of Play Plates by Paravicini – eight plates which, when rotated, create an interesting play of shapes and animation, based on the principle of motion photography by Eadweard Muybridge – or the project called Faces plates by Jean Jullien x Case Studyo, a set of plates exploiting color, pattern, and form to make eating a fun occupation.

Kiasmo has put its name to a set of plates characterized by geometric patterns in no other color but black and yellow while at the Salone del Mobile the DeLightFul project was on display, signed by CiarmoliQueda Essentials: this Milanese design firm presented a brand new vision of contemporary living in the form of an emotional trail made up of various domestic interiors furnished with cult design products. What better occasion than the Salone for producing and displaying a new set of plates which, when put together, form the word DeLightFul.

As we continue our exploratory trip through the world of design, we cannot help but mention one of the new proposals on display at the Salone Satellite, the section of the Salone del Mobile entirely given over to young designers: here we find a project by the design firm Fritz und Franken consisting in a set of ceramic plates played out on the themes of material and food, in a mix of form and function.

Theodora Alfredsdottir presents From the ground up, a tableware project of modular and stackable elements, while the Blow series by design duo Job Smeets and Nynke Tynagel for Seletti, is based on the concept of democratic design in perfect pop style. This series also comprises six porcelain plates presenting various graphic designs: Weed, The Wall, Mouth, Peace, Hot Dog, and Egg.

Our search for plates at Milano Design Week 2017 finally leads us to Blue Sunday/Pool by Anna Badur: an amusing experiment with traditional blue-colored ceramic ware which plays with the movement of water, while exploiting its fluid and liquid properties.

PrintFood: Food as Stories at Sirha