Making cocktails is a top skill, the best mixologists are able to cook up amazing experiences with fresh ingredients and the same sort of flavour pairing you’d expect from any great chef.

As imaginative as these mixologist can be, they still know how to make the classics, the popular cocktails people order again and again.

Mixologist Salvatore Calabrese has collected 20 of the most popular cocktails and they have been broken down and illustrated by The Daily Mail.

The infographic shows you how to make each drink with the ingredients listed down the right.

The Margarita is one of the world’s most famous cocktails, and is easy to make with lime juice, triple sec and tequila for the classic Mexican cocktail. Of course, it wouldn’t be the real deal without the glass rimmed with salt and a slice of lime to garnish. The ice should be crushed and not cubed.

An enduring classic from the Tiki class of drinks, made with rum, orange curaçao, fresh lime juice and orgeat (a kind of almond syrup).

Famously drank by 'the Dude' in The Big Lebowski, the White Russian is made with Kahlua, fresh cream and vodka. Some recipes call for cream rather than milk, and involve mixing rather than layering.

The Caipirinha is Brazil’s national cocktail and is made with cachaça, sugar, and lime. It's a fresh, zingy and tropical taste of South America’s largest country, and perfect for summer evenings. 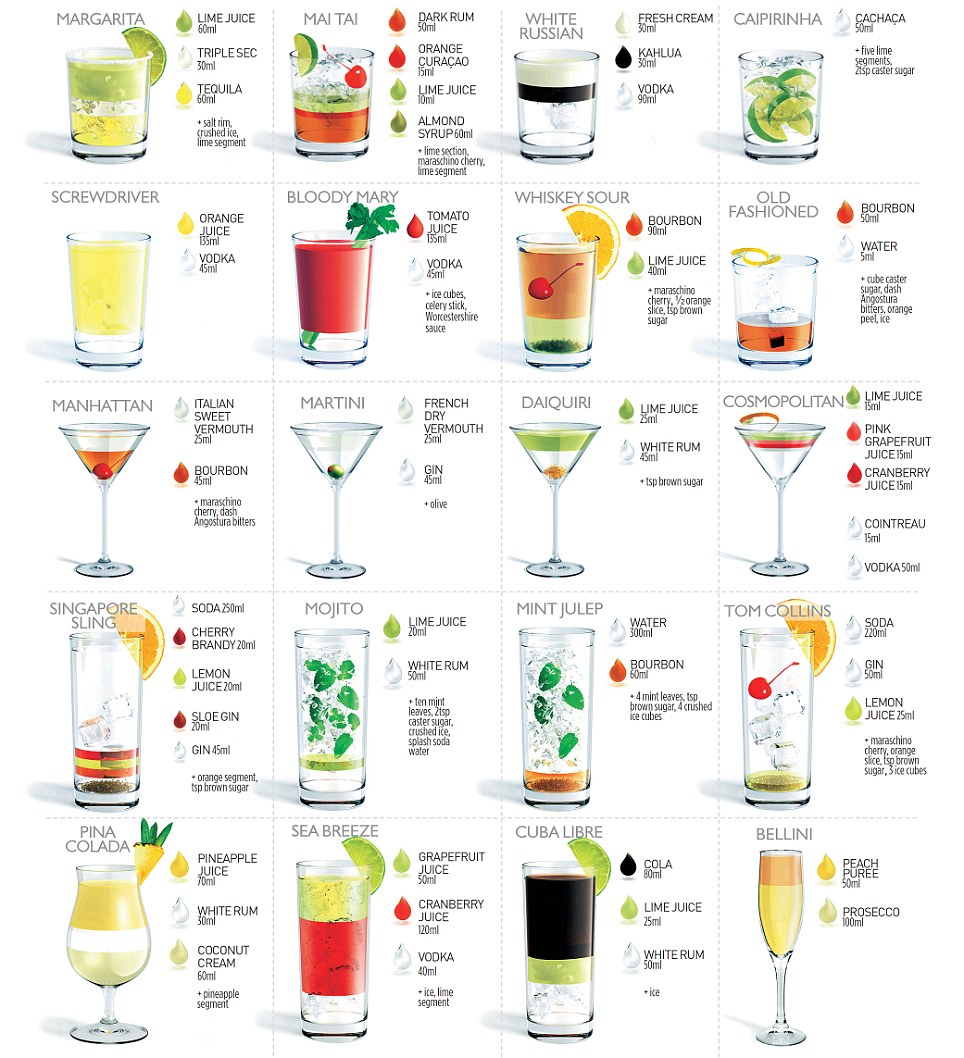 A closer look at a few cocktails

This drink doesn’t beat around the bush if you’re after a buzz. An alternative recipe calls for 2 ounces of rye whiskey, 1 ounce of sweet vermouth, and 2 dashes of Angostura bitters. Its most widely circulated origin story is that it was invented in New York in the 1870s for a banquet hosted by Winston Churchill’s mother.

This cocktail will take you to the tropics. With roughly two parts light rum to one part simple syrup or brown sugar and 1 part lime juice, make sure you shake it with ice to make it fresh and cold. The daiquiri has Cuban roots and enjoyed its heyday in the 1940s, but the recipe isn’t too far off from the rum-based grog British sailors drank centuries ago to fend off scurvy. Drink up, matey.

Margarita means 'daisy' in Spanish, and its etymology points to its Prohibition era origins when U.S. residents hopped over the border to Mexico to consume similar cocktails involving a mix of spirits, liqueur, and citrus. An alternative recipe calls for 2 ounces of silver tequila, one ounce of Cointreau, and one ounce of lime juice. Don’t forget the salt on the rim.

Learn how to make a 'halloween pumpkin' with chef Natalia Rudakova.
Drinks

Gin & Tonic Nordic Style: Behind One of the World's Best Gin