Luigi Castelli Gattinara is an Italian still-life photographer. His stylistic technique draws on imaginary antiquity, with clear references to Caravaggio and the Flemish painters. "Snapshots on canvas", as someone has called them, is a very evocative image that conveys the impression one gets looking at his photos. With their light and composition, viewers find themselves looking at veritable photographic paintings.

How would you describe your approach to still-life photography?
Ever since I was a child I’ve been fascinated by objects. When I was given my first little camera, a Comet Bencini, I was probably 10 or 11 years old: every so often on Sundays I’d wander around Rome with my father, photographing little details of Roman remains; some years later, after collecting household objects, I’d take them to the Lungotevere promenade and photograph them. I had then and still have the feeling that the elements that go into a “still life”, with their symbolic significance within the composition, represent the thoughts and emotions of the people who shoot them and look at them.

How do you select what to feature in your images?
Do you have any specific criteria? For me, in general, it’s something that leads to the creation of a composition: the “scene” is built around that. The choice comes from observation, which in any case remains an individual aspect and method: in fact, I think that every one of us has a unique and non-replicable visual perception.

Where does your interest in the representation of food come from?
In 1987, when I moved to Caracas to open my studio, I realized that in the advertising field the most interesting market is the food market. I’ve always treated food in a way that brings out its magic as if it were a “precious object”, and soon I realized it was. In many of my non-commercial compositions, along with other elements like musical instruments, books, etc., there is some food present: a bunch of grapes, a pear, a turnip, a quince, that I insert, trying to represent that incredible work of art created by Nature. 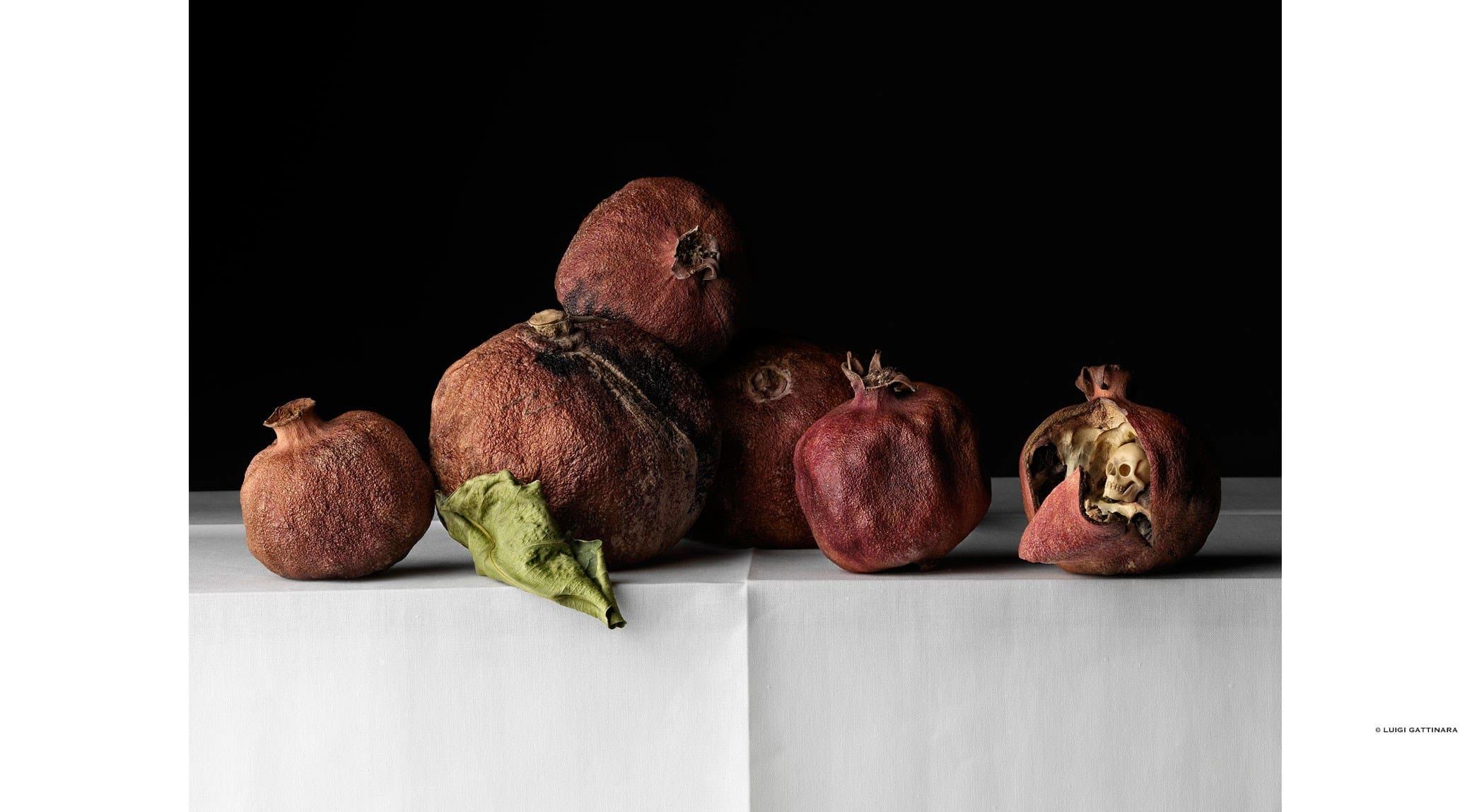 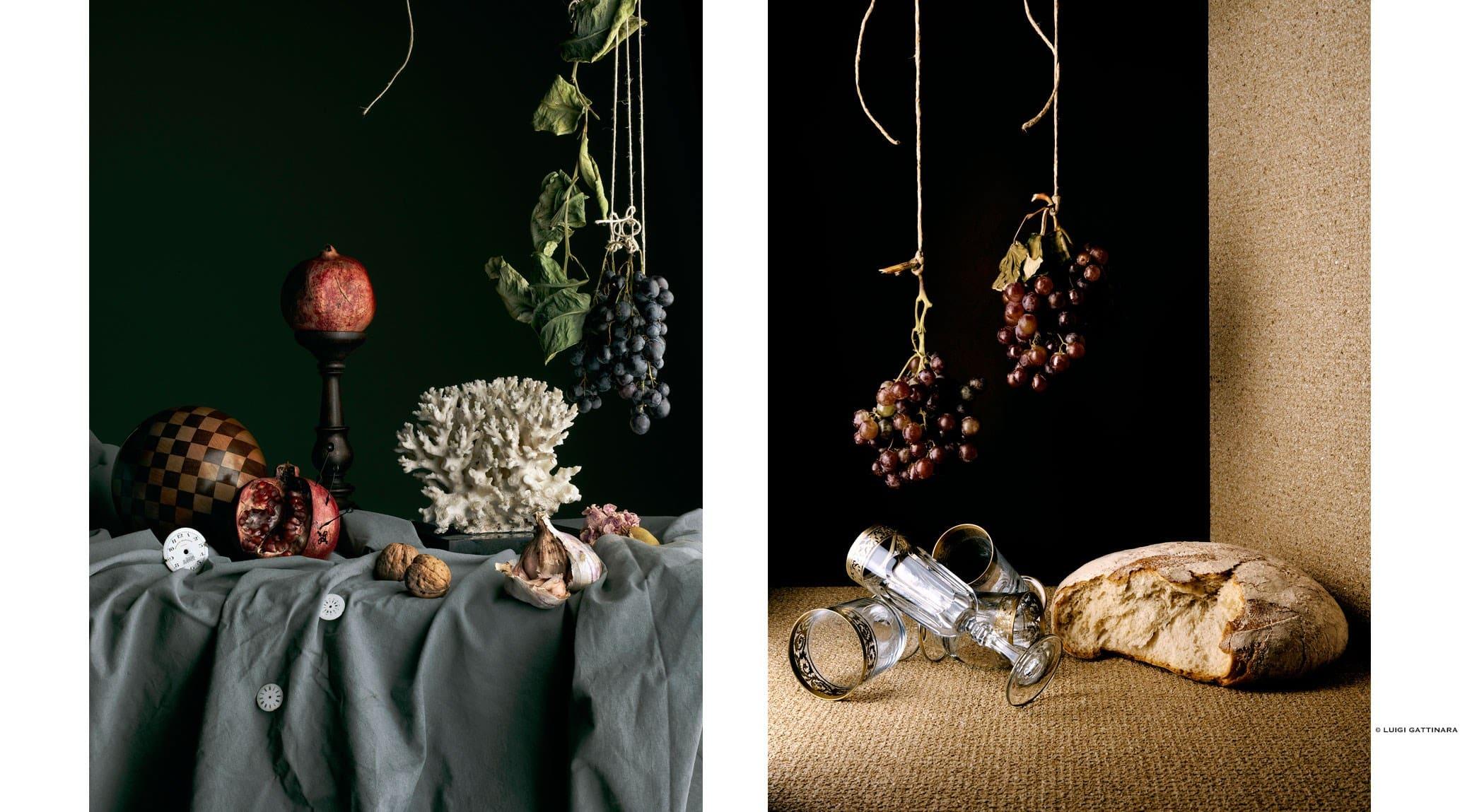 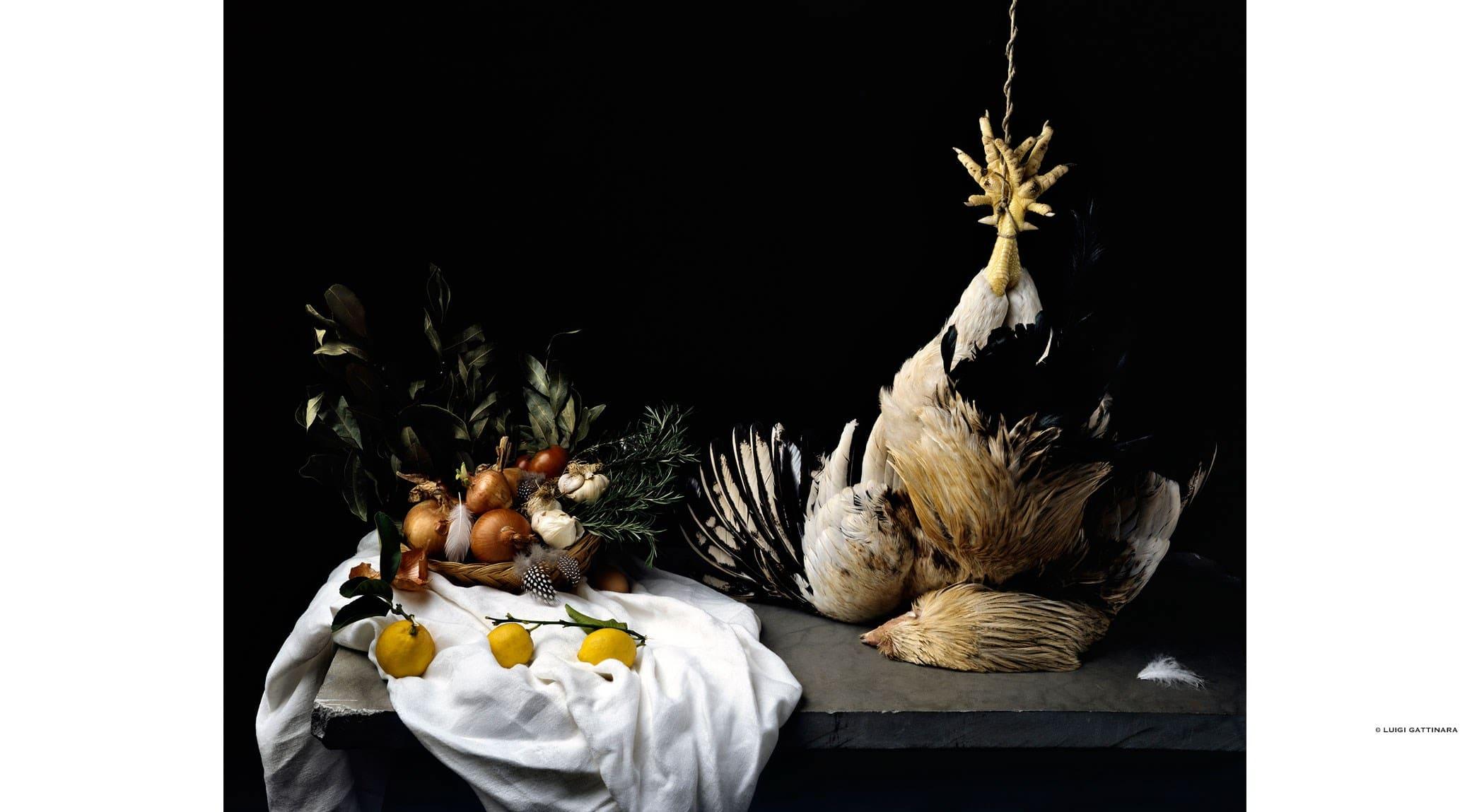 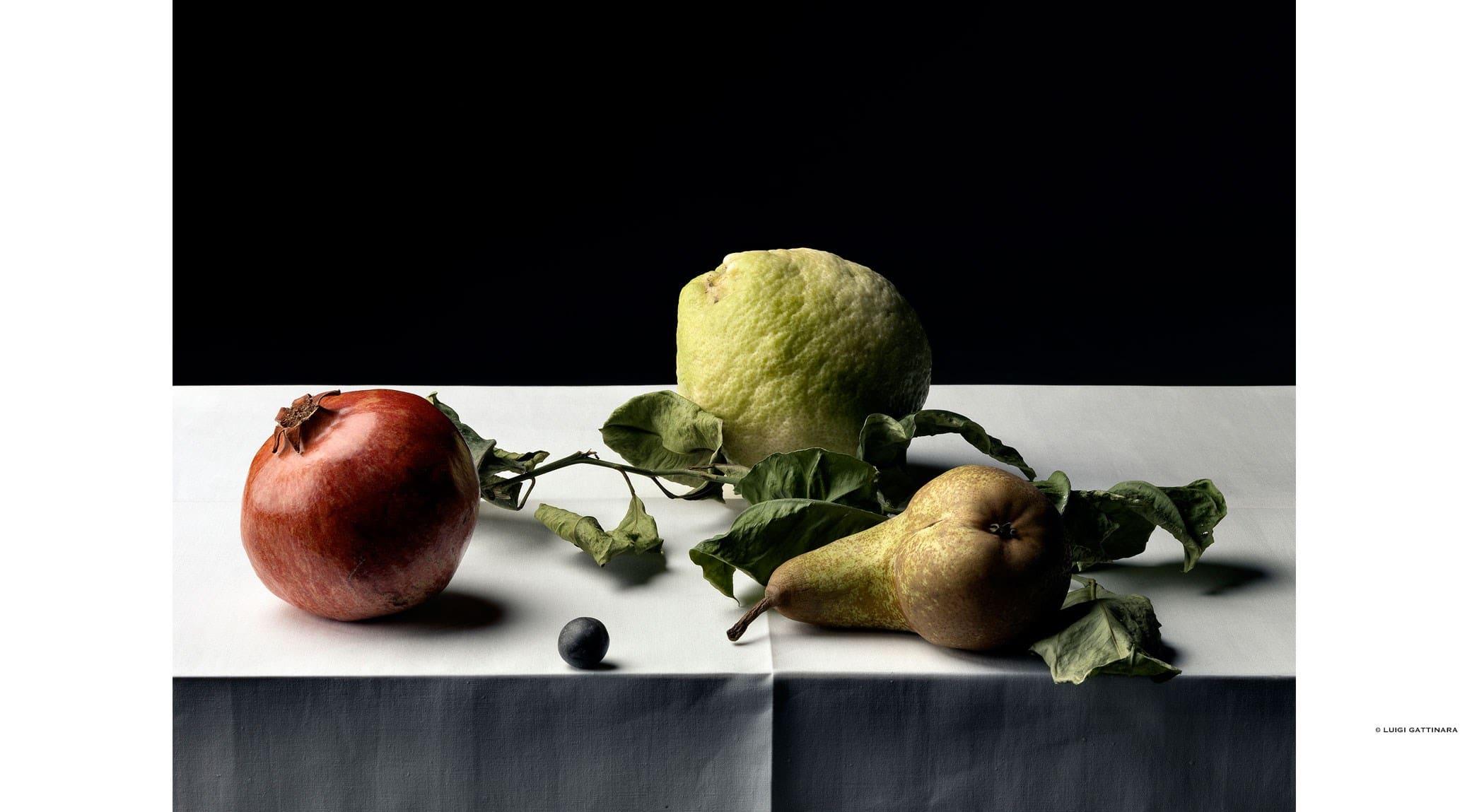 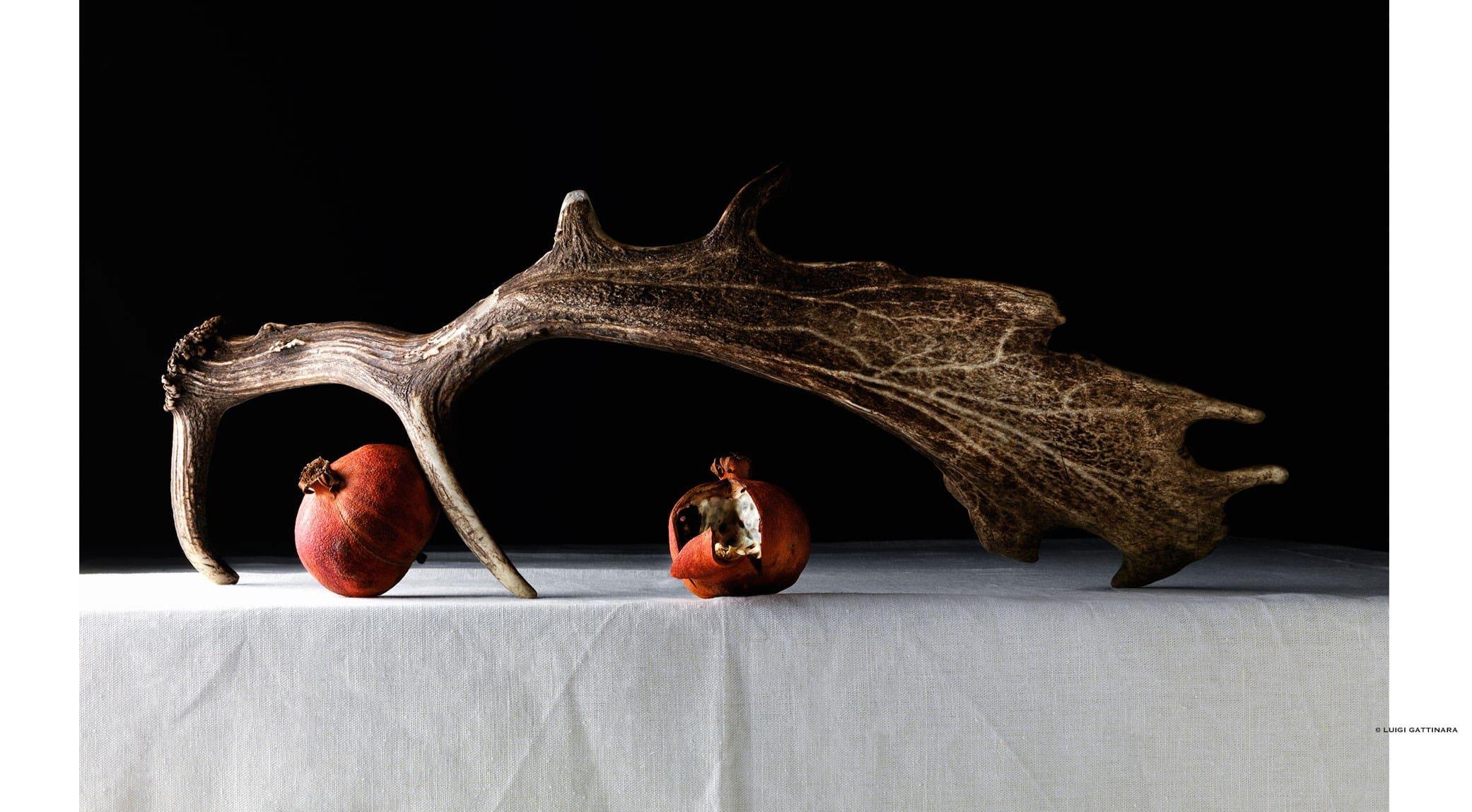 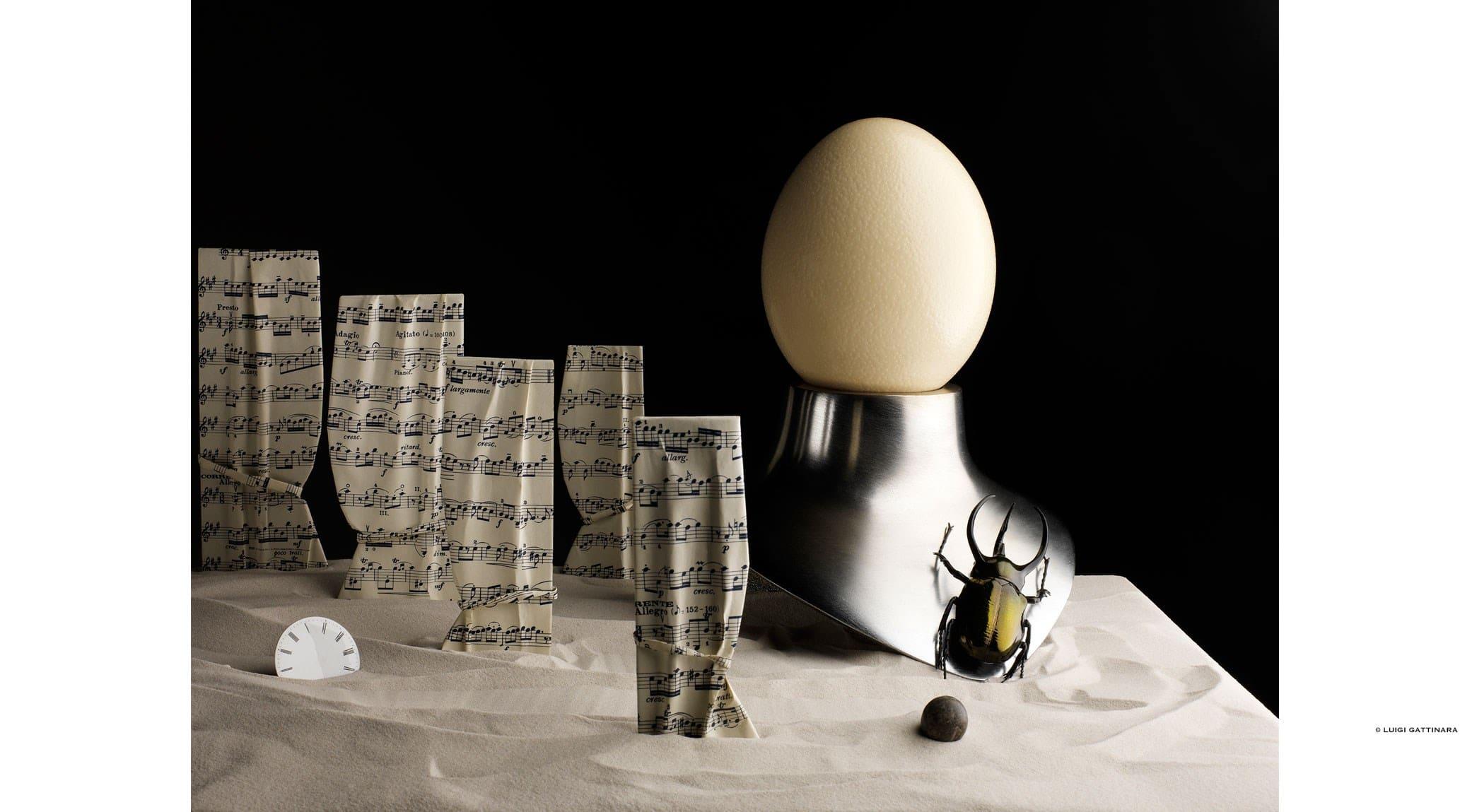 Can you please tell us more about your picture titled Natura morta con piume (Still life with plumage)?
Some time ago a great journalist and news director gave me a wonderful challenge: “I am more than certain that it is not photographically possible to depict a capon or some other dead poultry hanging by its feet without causing unease in the observer”, he told me. And that was how “Natura morta con piume” came about: that capon hanging by its legs - silent, in all its splendor, and in its great majesty - became the protagonist, but the name came from the little feathers scattered around the scene. To be honest, after I shot it, I couldn’t manage to cook it: somehow it was part of me, so I gave it to the porter at my studio.

Talking about your personal relationship with food, what is the first taste you remember, and why?
If I think back, the first thing I remember are the flavors of Piemontese food, the dishes my mother would make: great risottos, and the crêpes Suzette she prepared as a snack for me and my brothers. I would often watch her preparing her recipes, and I’d make her tell me about how in the summer, at the villa on Lake Maggiore, she would go down where the kitchens were and talk to the chef and steal his secrets.

If you close your eyes and think of fine dining, what comes to mind?
Independently of photography, I love to cook, especially for friends: for me cooking is a way to display creativity; I mean, the pleasure of combining flavors in a fun, exciting setting. If I close my eyes and think of refined cooking, I think of something made by the hands of a great chef who, like an artist, uses flavors and brushes to construct his own work with passion, character, and love: the ingredients themselves, which don’t seek to amaze or dazzle, are simply the true expression of the person who created them.

A tasty and simple appetiser from restaurant Elis in London.
You may also like
Article
How to Eat Panettone Like an Italian
Article
Chocolate Mon Amour - Tips and Tricks for Storing and Tasting
Article
What are the Best Alternatives to Soy Sauce?
Article
Pick Up the Fonio, Save the World?
Food Photography

The Ultramarine World of Gregor Törzs