Chef Quique Dacosta continues to carry the mantle of avant-garde cuisine in Spain. In his eponymous restaurant in Dénia, Spain, which has held three Michelin stars since 2013, Dacosta weaves together a compendium of culinary modernist Mediterranean masterpieces, masterfully inventing, deconstructing and reinventing. It is a constant symphony of inspirations taken from the land around him, from the people and a rich history told through the artful language of Dacosta’s cooking.

Dacosta cooks using only local ingredients, sourced within 75km of his restaurants. Origin is very important to him.

“Our interest in evolution is what sparks our work every day. Working to create morsels that are, in some way, new and seductive. I believe in every kind of evolution: in the evolution of thought, of cooking, of the arts, of technology, of science. Creation is part of evolution. I enjoy and freely express what I feel, and this is a reflection of what I do and have done. It is time to show it,” he says.

“And I also firmly believe in the origin of things. The legacy of history and how it has marked us and marks our evolution. We are, at once, both origin and evolution.”

So which dishes do consider most representative of his cuisine and why?

The Animated Forest - Because it represents a movement in world cuisine. In 2003 we created this dish in Quique Dacosta Restaurante and it ended up becoming a landscape kitchen movement. It has served as inspiration beyond techniques to create lands, stones, essential oils, papers, the treatment of vegetables and spices ... It has marked the work of other chefs in Brazil, Italy, France, etc. It has even transcended to the sweet kitchen and I am very proud of it.

Senia Rice Cooked with a Broth of Smoked Eel, Cherry Pearls and Rosemary flowers - It symbolises a commitment to the evolution of the concept of rice from a Spanish Mediterranean perspective. It is surely an evolutionary harmony that has territorial proximity with typical products of the Valencian community. A new rice, that rescues flavours and ingredients from a variety that symbolises the meaning of paella rice: the Senia. Although we have others such as Assorted Rice, Aloe Vera Rice, Bitter Almond Rice ... Behind this dish, there are techniques such as how to cut the cooking of the rice or how to make the cherry pearls. In short, haute cuisine techniques.

Almond Nougat - It represents a clear conviction of my territory as a language of seduction and inspiration that allows me to communicate with customers who come from all over the world. I can show them in the 3-hour experience at Quique Dacosta Restaurante, what we are and where we come from. 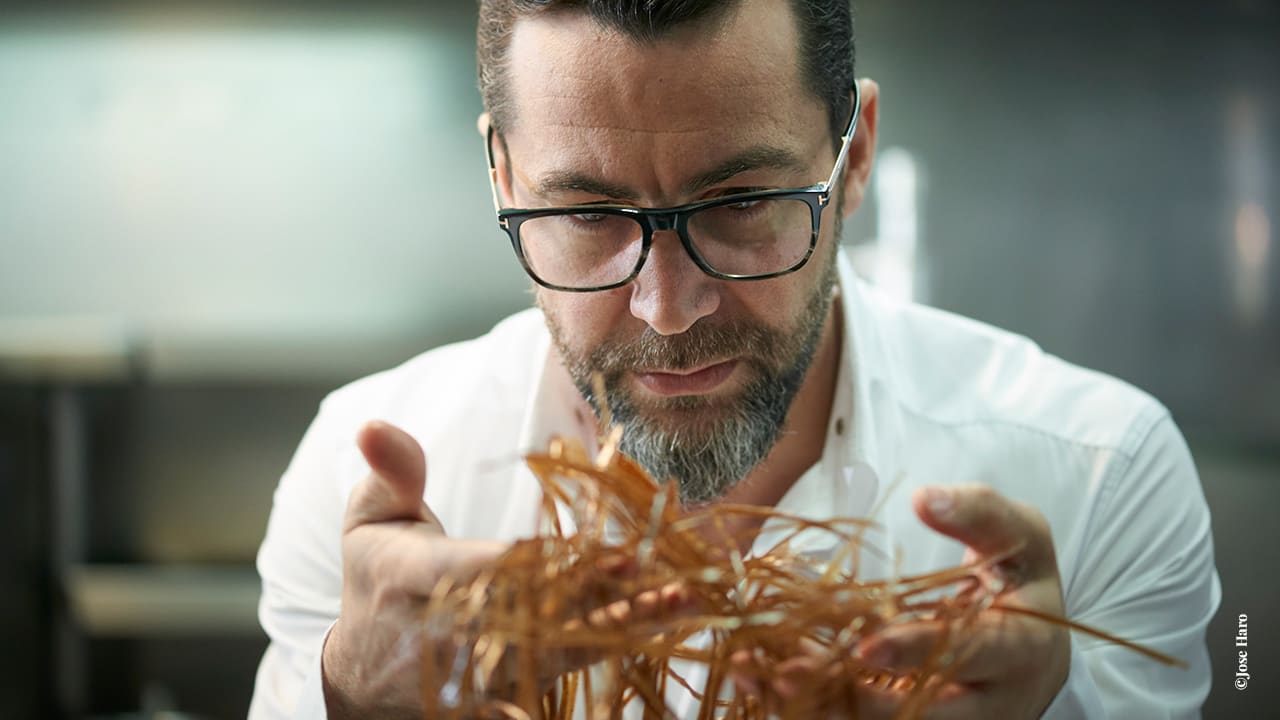 Can you describe the Almond Nougat dish in full?

It is a dish created from a specific moment of nature itself. It is the moment in which the almond blossom falls to give way to the fruit: the Marcona almond. Our goal when creating this dish was to represent this moment, maintaining the commitment to the cultivation of almonds, looking for the deseasonalisation of a preparation such as nougat, and reinforcing our commitment to the turroneros. At the same time, it is impossible to include nougat in savoury cooking because of its fragility. Regarding the Mediterranean, we claimed the duck shrimp, just as we reclaimed the Dénia red shrimp, a little-known ingredient of great value to me that recalls the Lonja de Denia.

Are you working on any other dishes currently?

White Asparagus Lace - We value the flavour of white asparagus, to which I feel very close, because of my family closeness to the cultivation of this it in Extremadura. With it make a dish of extreme fragility and beauty. The act is similar to eating a traditional paper lace but in this case with white asparagus and cream cheese, it is unctuous. We create roles with edible forms of crunchy flavour. A technique that allows us to domesticate the forms of edible paper and inside the cup we make a kind of white asparagus tea. THE ANNIMATED FOREST (Bosque animado) - Photo by Pelut i Pelat