If the Adria family are culinary royalty then we are currently living in the Albertian era under the reign of Albert Adrià .

Under the elBarri concept, the former elBulli chef and Chef’s Table star has multiple projects on the go, Enigma, Tickets, Hoja Santa, Bodega 1900 and Pakta, not to mention Adrià’s collaboration with brother Ferran and José Andrés the Mercado Little Spain that opened in Hudson Yards, New York, in March of this year, as well as Cakes and Bubbles at the Hotel Café Royal in the city’s West End.

You would wonder where the great chef finds the time to do any actual cooking. Adrià, however, is at heart, more than a mere entrepreneur, part scientist, part artist, alchemist part entertainer, of course, his natural environment is in the test kitchen, experimenting, innovating, hunting the new and meaningful in his world of avant-garde gastronomy.

We so much going on in Adrià’s world, with everything in flux, constantly changing and evolving it is nigh on impossible for him to choose dishes that represent the essence of Albert Adria’s cooking. We asked him anyway.

Which dishes do you consider most representative of your cuisine and why?
After 30 years it is hard to choose any dish, even more when we never keep the same dish on the menu for very long...

One of them would be the Coulommiers cheesecake, I choose this dish since we just recently opened Cakes & bubbles in London where we serve this dish and other sweet dishes created at elBarri, and since we started serving it at Tickets a few years back it became an instant house emblem.

Another of my favourites would be the Green "peasion" fruit, that is a passion fruit that is emptied and filled with char grilled peas, mint, chicken stock and passion fruit juice. It is playful, fun and delicious.

And of course our world-famous spherical olives that we just can't remove from our menu...people won't let us. 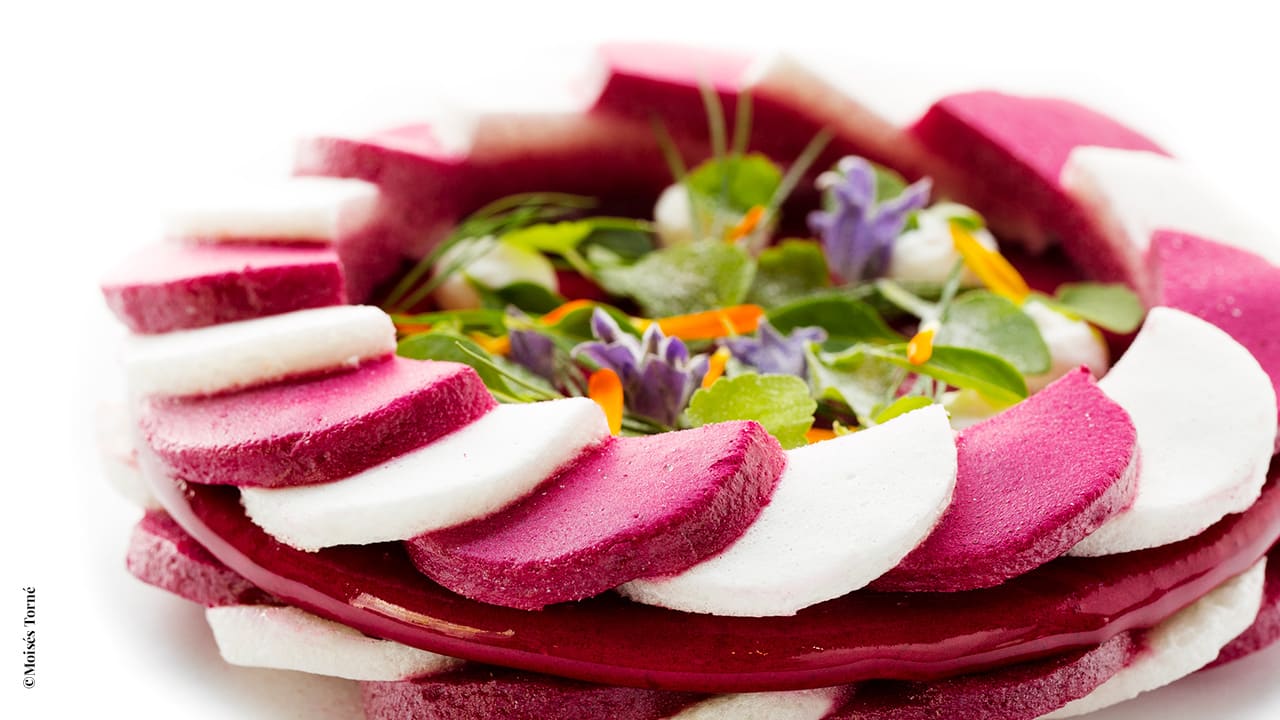 Can you describe one of these dishes in full to our readers?
I like to remember the Robuchon cake, a dish that we created for a special dinner to honour Joël Robuchon a few years ago with Dani García.

We had a hard time to make a dry meringue with so many shapes, flavours, colours and layers to work out. At the end the dish was a great success, tasteful and looked beautiful. And now that the chef is no longer with us, this dish has become even more special for me.

Are you working on any other dishes currently? Can you share something about it with our readers?
At the moment we are re-opening Pakta that has served Peruvian Nikkei for the last 5 years, and now we have transformed into a Mediterranean Nikkei. We are exploring the dialogue between these two cuisines. For example, we are working in a dish called Sea "lard" that is a piece of fish that is cured with herbs and salt as if the Italian traditional pork lard, and served in very thin slices with olive oil. Green peas in passionfruit by Ticketsbar / Photo by Moisés Torné Nori cube with seaweed by Enigma / Photo by Moisés Torné Snowcrab and avocado ravioli by Ticketsbar / Photo by Moisés Torné What Are Black Lemons and How to Eat Them?