Pane e Miele (Bread and Honey) is a collaboration between Italian artist Giorgia Mocilnik, Honey Fingers (Nic Dowse), a beekeeper and artist from Melbourne, and the beautiful European honeybee, Apis mellifera. Pane e Miele is also a project that was exhibited last year in Australia and recently in Milan, presenting 12 sculptural works of bread and honeycomb, the latter made and attached by Apis mellifera (the European honeybee).

With these sculptures the artists have gently, but deliberately, tested the adaptability of bees as animal architects. The objects highlight the intelligence of bees as architects; as well as the connection between bees and the food we eat. Although the shape of the breads was known, the comb the bees made was always a surprise. This is a true collaboration with the bees as, although the artists directed where comb could be built, the outcome (the shape, size, color and number of comb segments) was improvised by the bees, in the hive.

How did the collaboration with Honey Fingers and Piano Bee begin?
Giorgia: The creative collaboration – the artistic partnership – began with Nic Dowse (from Honey Fingers) in Melbourne, and it continued like that in Italy. In Melbourne we could use Nic’s bees to make the sculptures, and in Italy we were fortunate enough to have a great beekeeper and generous friend in Piano Bee, who lent us some bees and hives to make the sculptures. Everything has started last year while I was living in Melbourne and working as a waiter for this great gelateria, that has few hives on the rooftop. They were Honey Fingers hive and Nic was looking after them and when one day he popped into the ice-cream shop, I asked him if he was keen to bring me up to the roof and introduce a bit to the bee’s world. I loved it and I showed him one of my latest project, a series of collages about animal architectures, cohabitation, adaptability, of course with bees included... Since than we got along very well, he gave me the trust I was looking for long time and we decided to create something together, something that became real! 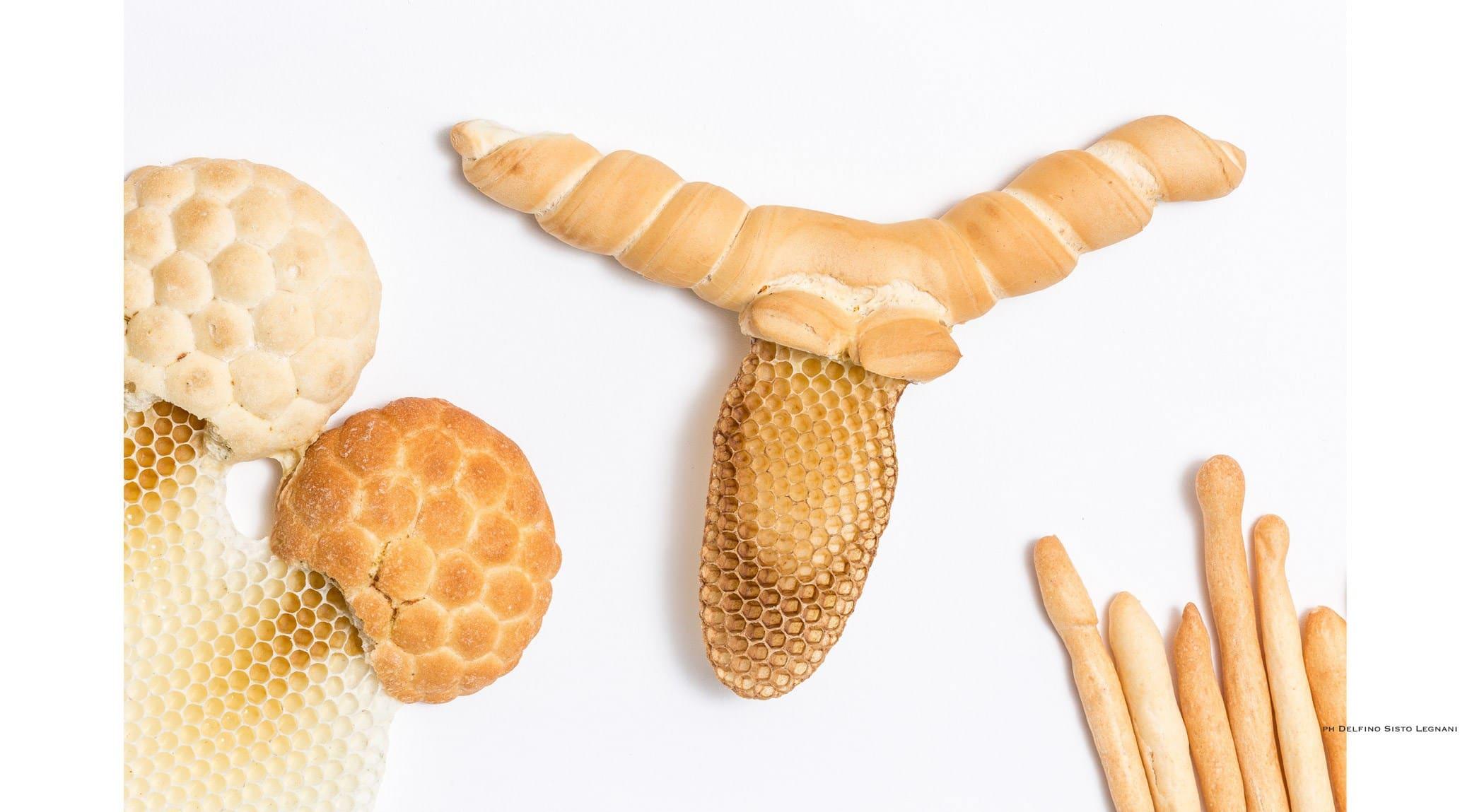 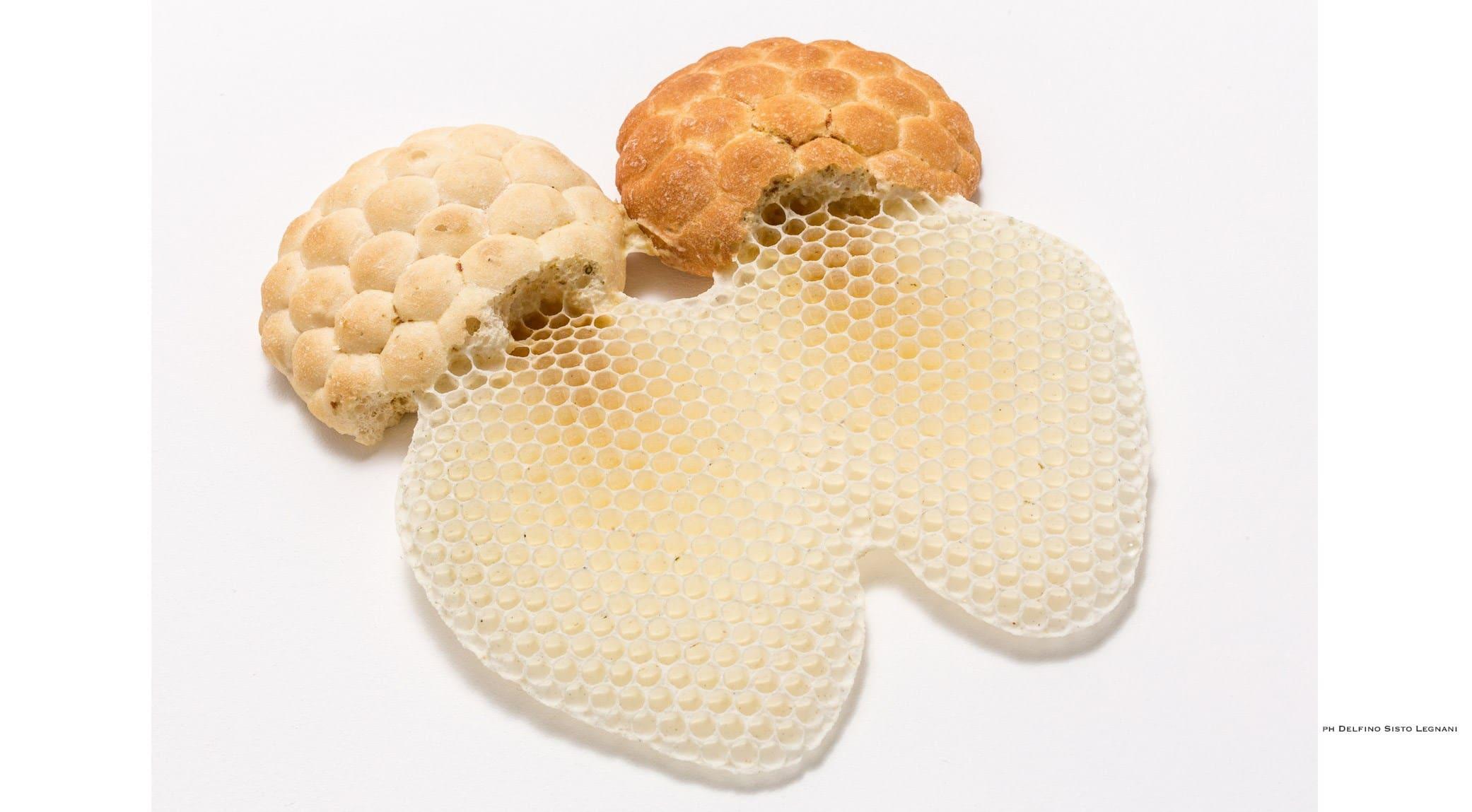 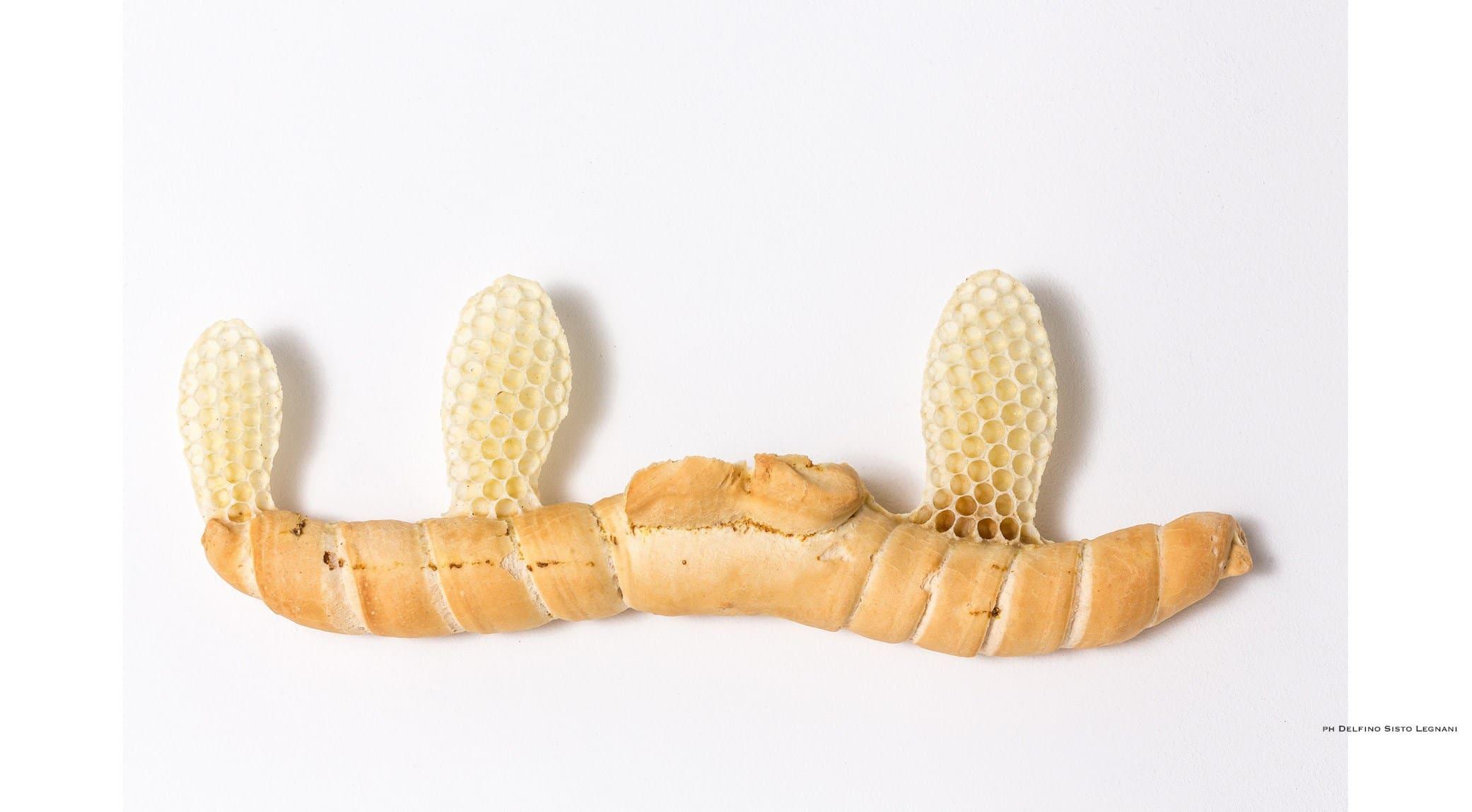 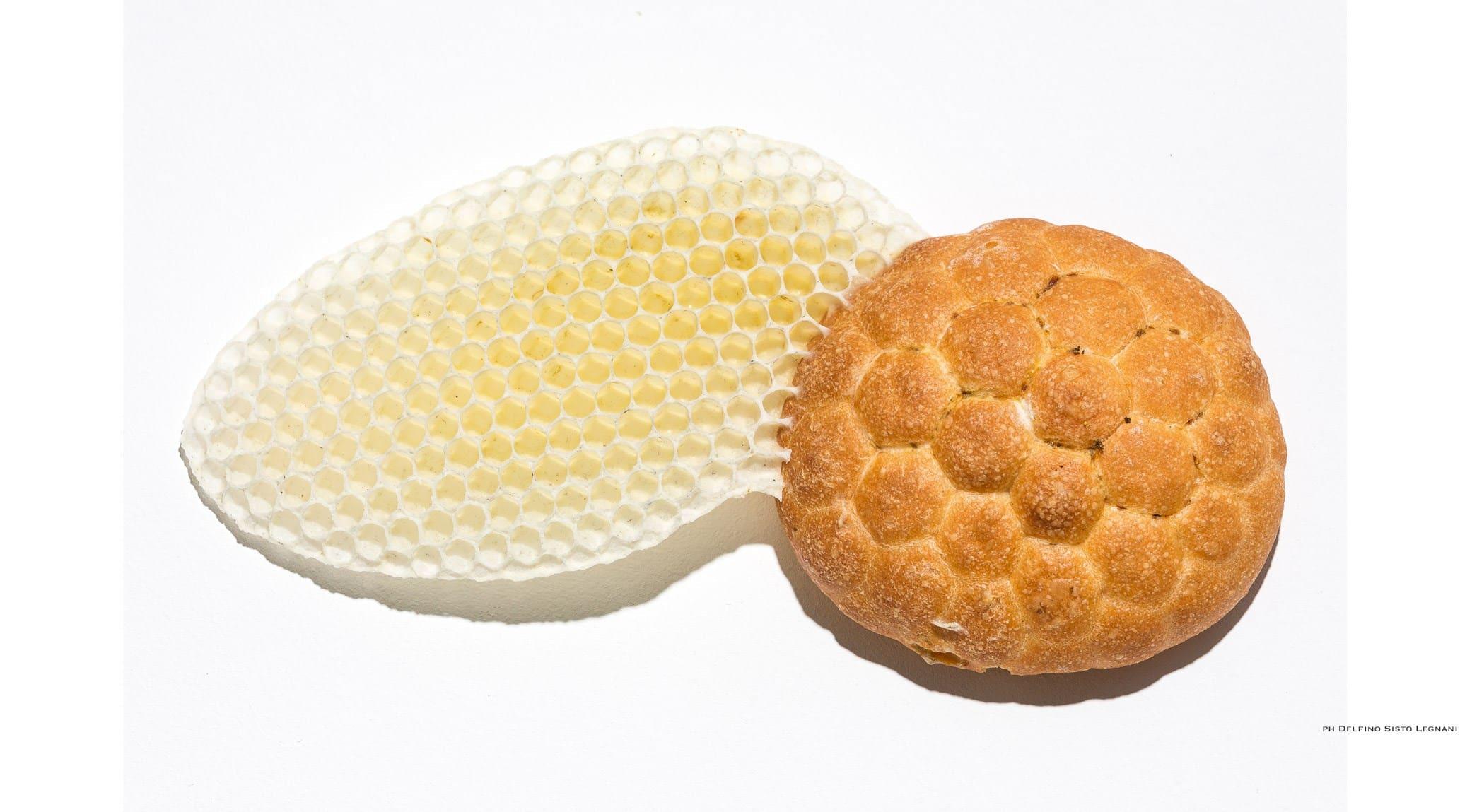 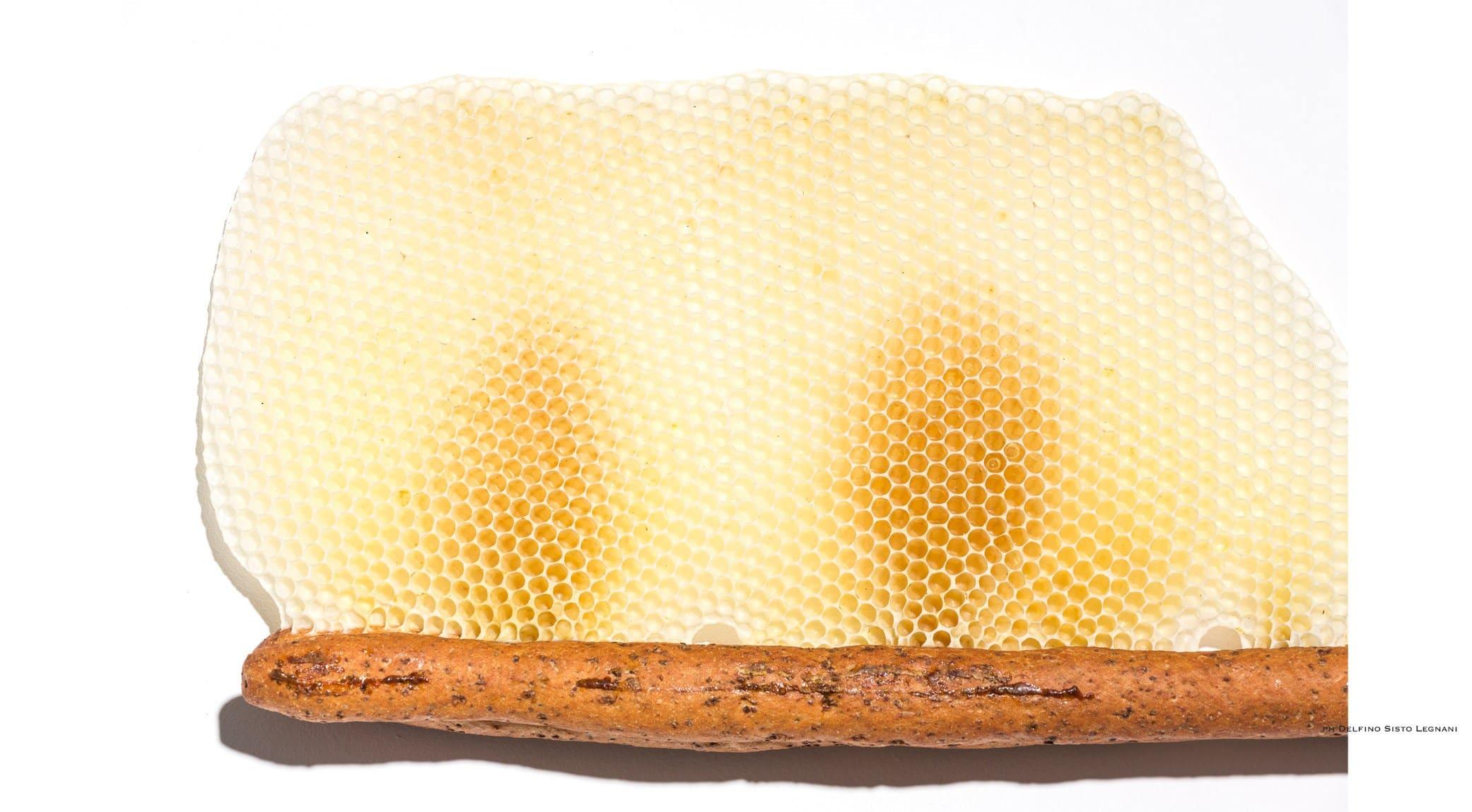 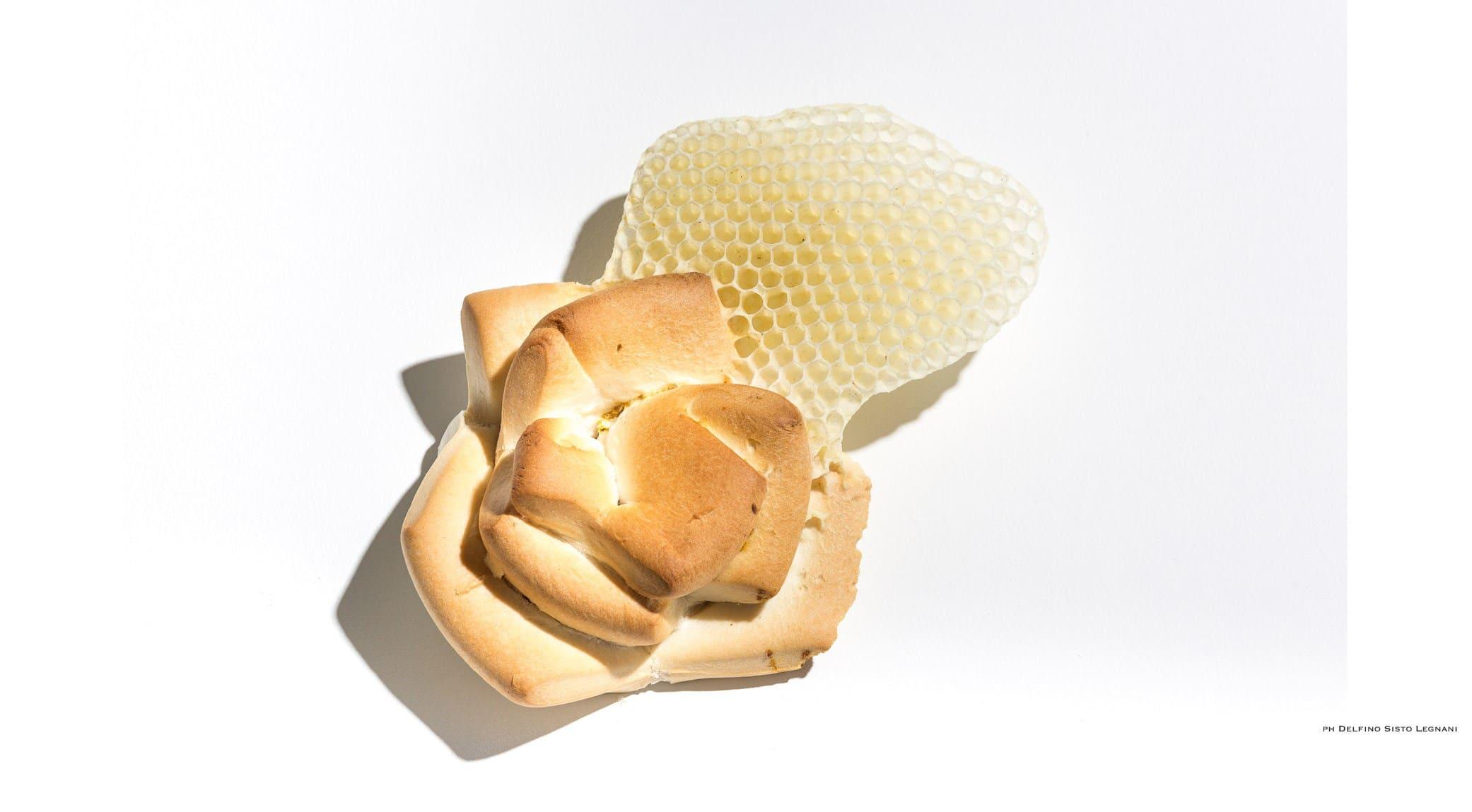 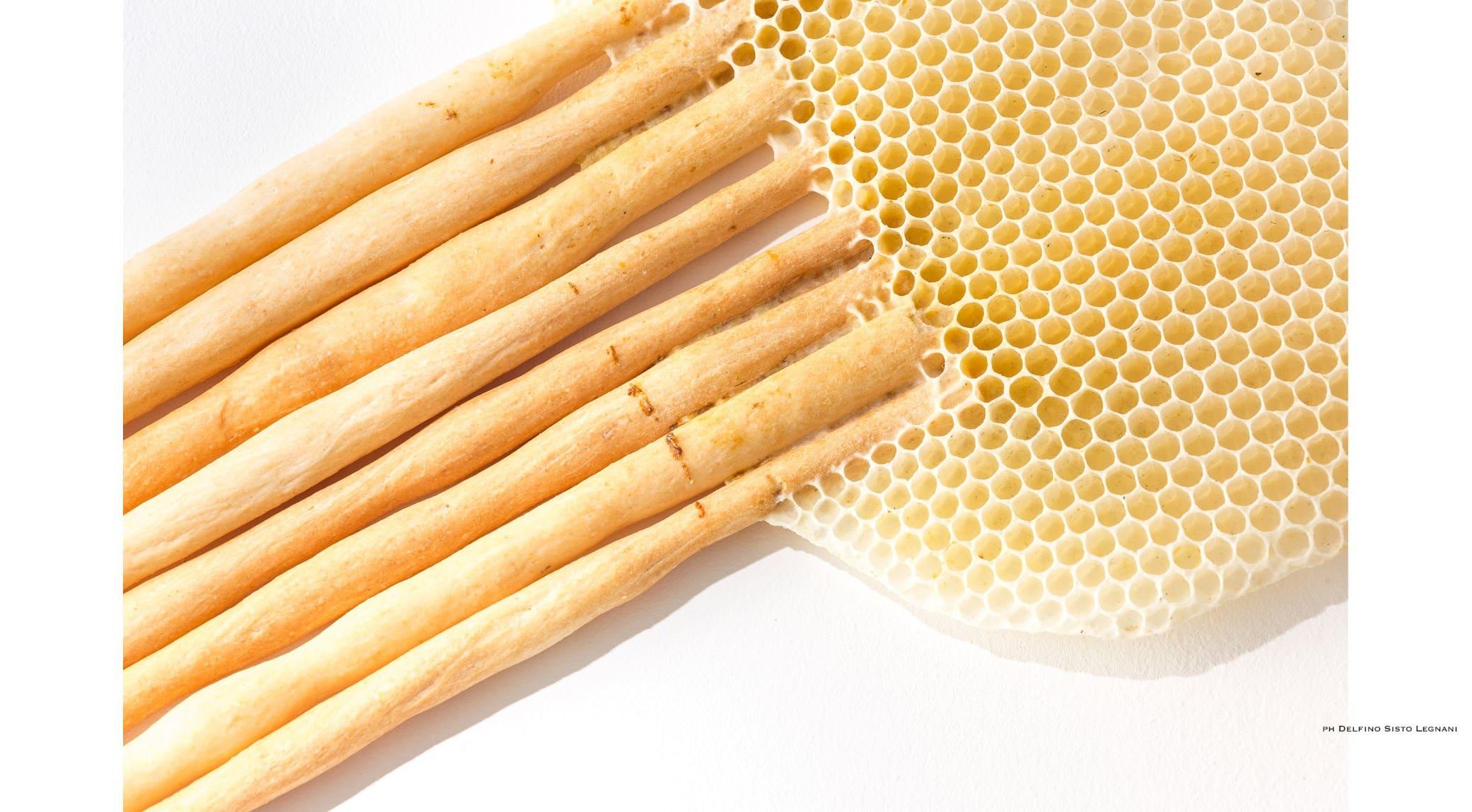 Can you tell us more about your project Pane e Miele, from how it developed?Nic: We have always eaten bread and honey. Bread has been a dietary staple in the west for millennia and honey has been hunted, robbed, produced and consumed for even longer. These materials are immemorial and can be traced to the ancients via archaeological sites throughout the Mediterranean – jars of (still edible) honey were discovered alongside treasures in Egyptian tombs; loaves of bread were found, intact, in the ashes of Pompeii.

Giorgia: Plus we wanted to work with this amazing social insect, in a friendly way and aware of all the risks that collaboration with animal can have; creating sculptures where the shape of bread was known, but the comb the bees made was always a surprise!

The future of the honey bee is a very topical issue today. Can you explain the importance of the role of the Apis Mellifera in the project?Giorgia: In parts of China and the USA many pollinators, especially bees, have disappeared. It is sad and alarming. These are now places where humans have to artificially pollinate trees, flowers, and so on. People have to be more conscious of these worrying changes happening around the globe, and the language of art is one of the best ways to reach all kinds of people – everywhere.

Nic: That’s so true. You know humans live in a kind of symbiosis with honeybees. We have lived with bees for millennia. Humans and bees rely on each other for mutual wellbeing: we need honeybees to pollinate so many of our food crops, as well as provide us with honey and products like beeswax. And bees rely on us beekeepers to look after them: we keep them healthy, make sure they live close to good food sources and clean water, we manage diseases and care for hives throughout the year. This has been a mutually beneficial arrangement for thousands of years – as humans moved around the world so did honey bees, and the arrangement was so good bees made enough honey to share with us. But something has gone wrong in the last few decades. Bee populations have started to plummet. Bees have been disappearing. Bee diseases and pests are spreading throughout the world – this is a darker side of globalization. The combination of pesticides (especially neonicotinoids), fungicides, diseases, pests, industrialized beekeeping practices, monocropping, inbreeding of queen bees – it’s just too much for bees to cope with.

Is there a message behind the project? Anything you would like visitors to take away from the exhibition?Nic: To follow on from the last question: the bee crisis should be a wake-up call for us. We should ask why this is happening. This is a big part of what Pane e Miele is about – what are the connections between bees and food we eat? We hope a big part of the answer is obvious in these sculptures: the connections are real, and also quite beautiful. We should cherish and celebrate those connections, and help bees out by doing so.

Giorgia: We have seen this unfavorable situation in the second edition of Bread+Honey when bees have started to eat some part of bread. Seasons are changing, they are not anymore what they used to be. This year happened that flowers started to bloom a few weeks earlier, as a result bees came out from their winter sleep earlier too – but then it rained for many weeks. This was very unusual. As a result, the bees were starving, they run out honey and the only supply of carbohydrates and proteins was the bread inside the hive. It was nothing very dangerous, but it showed a little part of the bigger situation. And the bees eating the bread was not surprising: an old beekeepers remedy was to give flour to bees when they were weak.

The project exhibited in Australia last year, and recently in Italy. As an international project with a local flavor, how and why you have adapted the exhibition using local bread, depending on the country and which varieties you chose for the Italian project?Nic: In Australia, the bread reflected the various cultures that emigrated there: Italian sourdoughs, Turkish simit, French baguettes, German pretzels. In Italy the story of the bread selected is the history of the deep traditions of Italian baking and regional styles: similar bread has different, quite interesting, shapes; ingredients change from region to region.

Giorgia: We worked mainly with three bakeries here: one from my home town, Trieste, and the other two from Cesena (where Piano Bee keeps his apiaries and the sculptures were being made). We selected a bunch of various varieties such as soy flour, spelt, oats, maize, and wheat bread – which is also the typical ingredients of pasta in this country. The story of the different shapes is interesting. Historically, not all bakers had their own oven and they carried their loaves to cook in communal ovens. To avoid confusion and to differentiate the bread, the bakers decorated them with cuts and designs and made them in unique shapes. These baking traditions continued, even once bakers had their own ovens. A great example is the way the same kind of bread has different names in different regions: the classic ‘Ferrarese’ (from Ferrara) is called a ‘crocetta’ in Cesena and surroundings.

Any new projects you’d like to tell us about?Giorgia: Honestly I have thousand of possible steps in my mind. The only issue for us is the distance. I am not living in Australia any more than this make things complicated. We will work around it, for sure. The project has so much potential.

How many types of mozzarella are there? Find out more about all types of fresh mozzarella and the best way to use them in the kitchen.
You may also like
Article
Food Mythbusters: Can I Soften Butter in the Microwave?
Article
Zineb Hattab: Future-Proof at KLE
Article
Sean Brock's Ridiculously Easy Buttermilk Pie Recipe
Article
Watch Michelin Chefs Cook Sea Bass
Food Design

Where Pattern Design and Food Meet