The Adventures of the Interplanetary Egg is the title of a project by Italian photographer Carlo Ottaviano Casana, in which dazzling white eggs are shown alongside old mechanisms and rusty tools to create a bizarre, delicate, almost theatrical atmosphere.

With their ironic and playful approach, these "landscapes" transform the perfection and purity of eggs into a sort of spaceship ready to blast off towards unknown galaxies.

Intrigued by this project, Fine Dining Lovers addressed some questions to Casana, in order to learn how the idea first came about and what sort of relationship he himself has with food.

What lies behind the idea of the interplanetary egg and its adventures?
Last spring, I was thinking about what I could photograph during the days I planned to stay in the Tuscan countryside that same summer. While browsing through a book on French still life artworks of the 1700s, I encountered once more a painting of a basket of eggs by Louis Tessier and decided that that would be the subject of my work: I had in mind the eggs by Tessier, as well as those photographed by Man Ray, Paul Outerbridge, and Hans Finsler. On my arrival, I started taking shots, without however finding a meaning or the right key. So, I took a look at the cellar and rummaged through the stables until I happened to glance a box full of iron parts, mechanisms and old pieces of equipment, most of which had become rusty. When I took a closer look, I spotted a ferrule. I immediately saw it as a spaceship. I disentangled it from the other bits and pieces and dusted it off. In the meantime, the interplanetary egg took up its position at the helm: it took off on its interplanetary missions and I went on taking senseless photos. 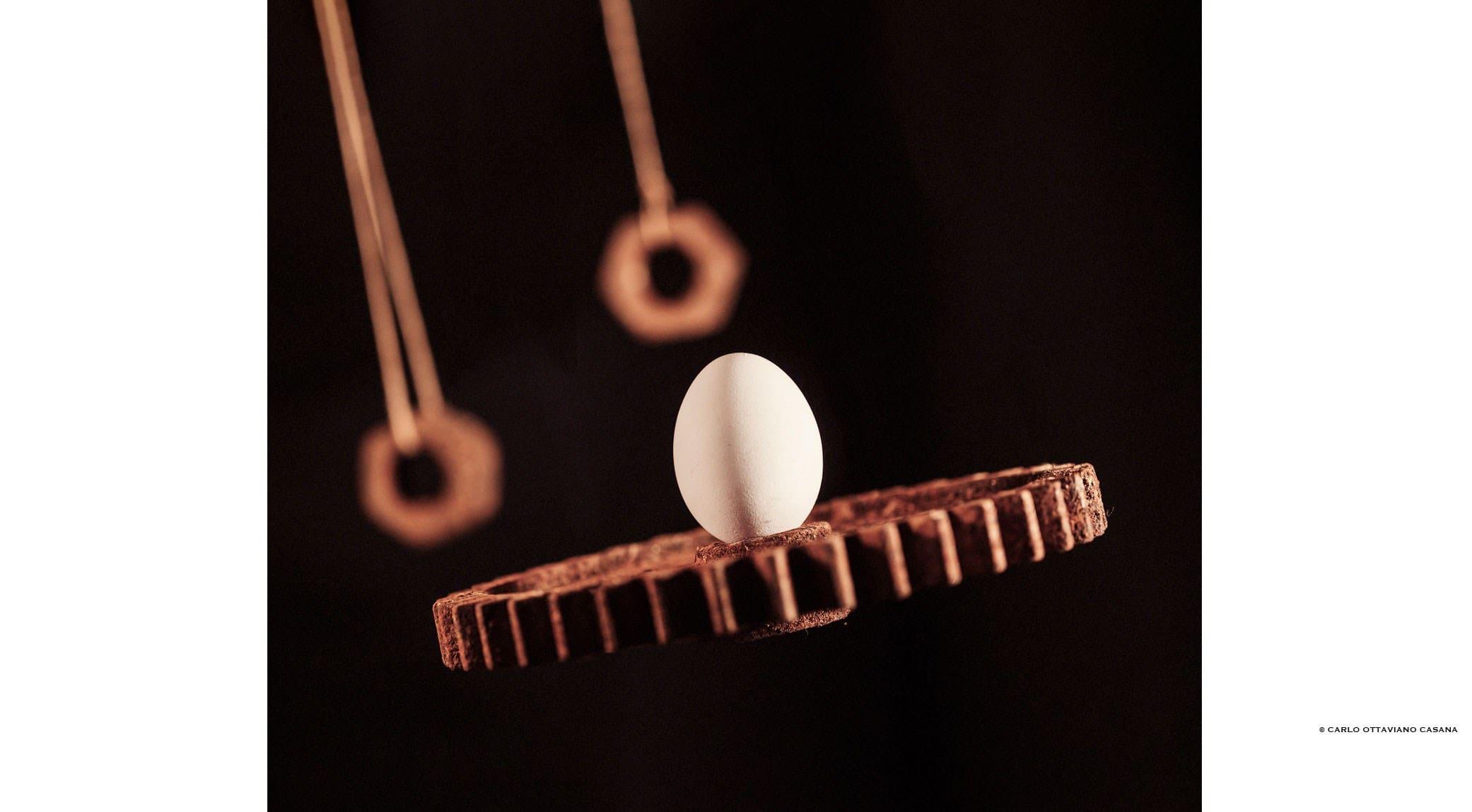 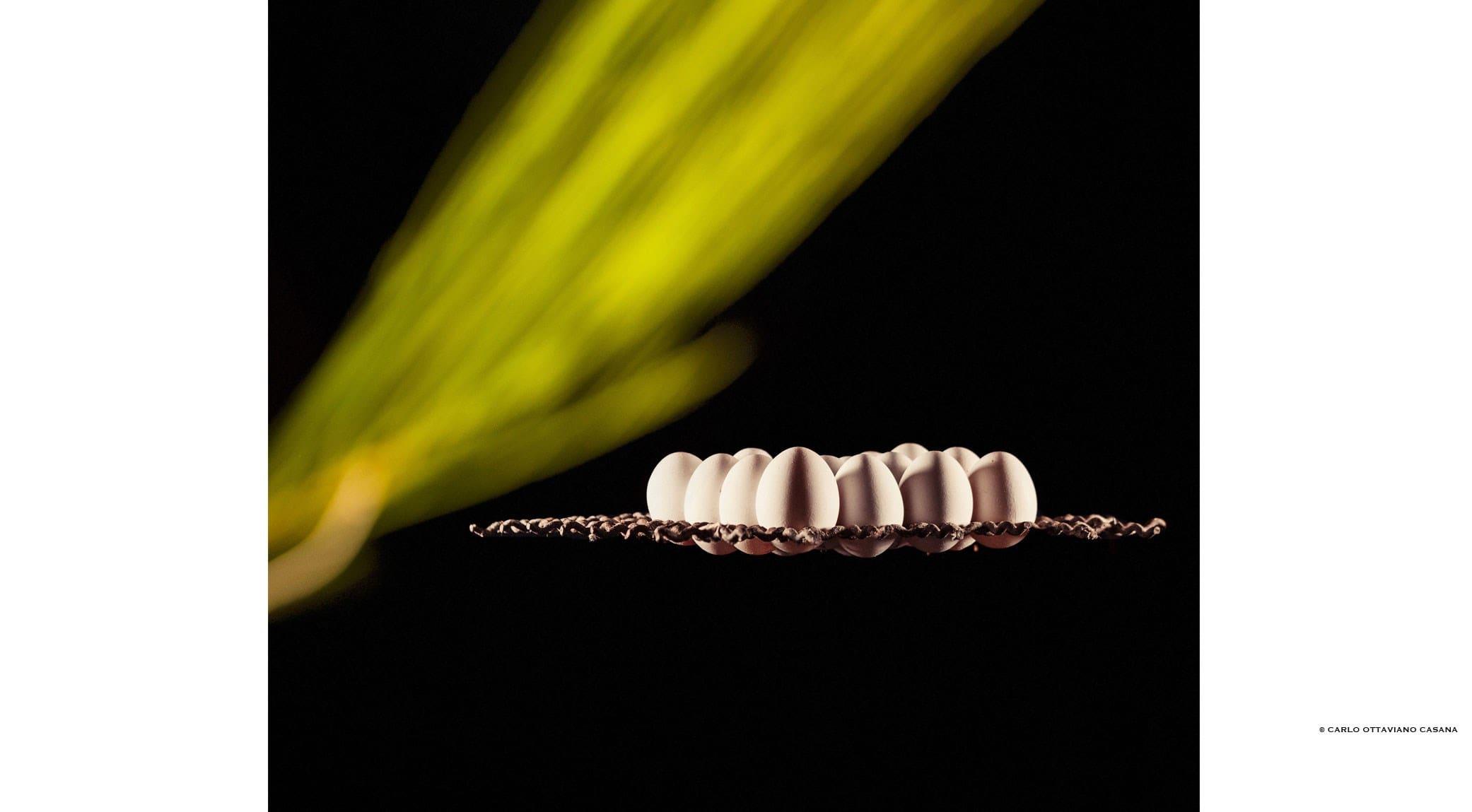 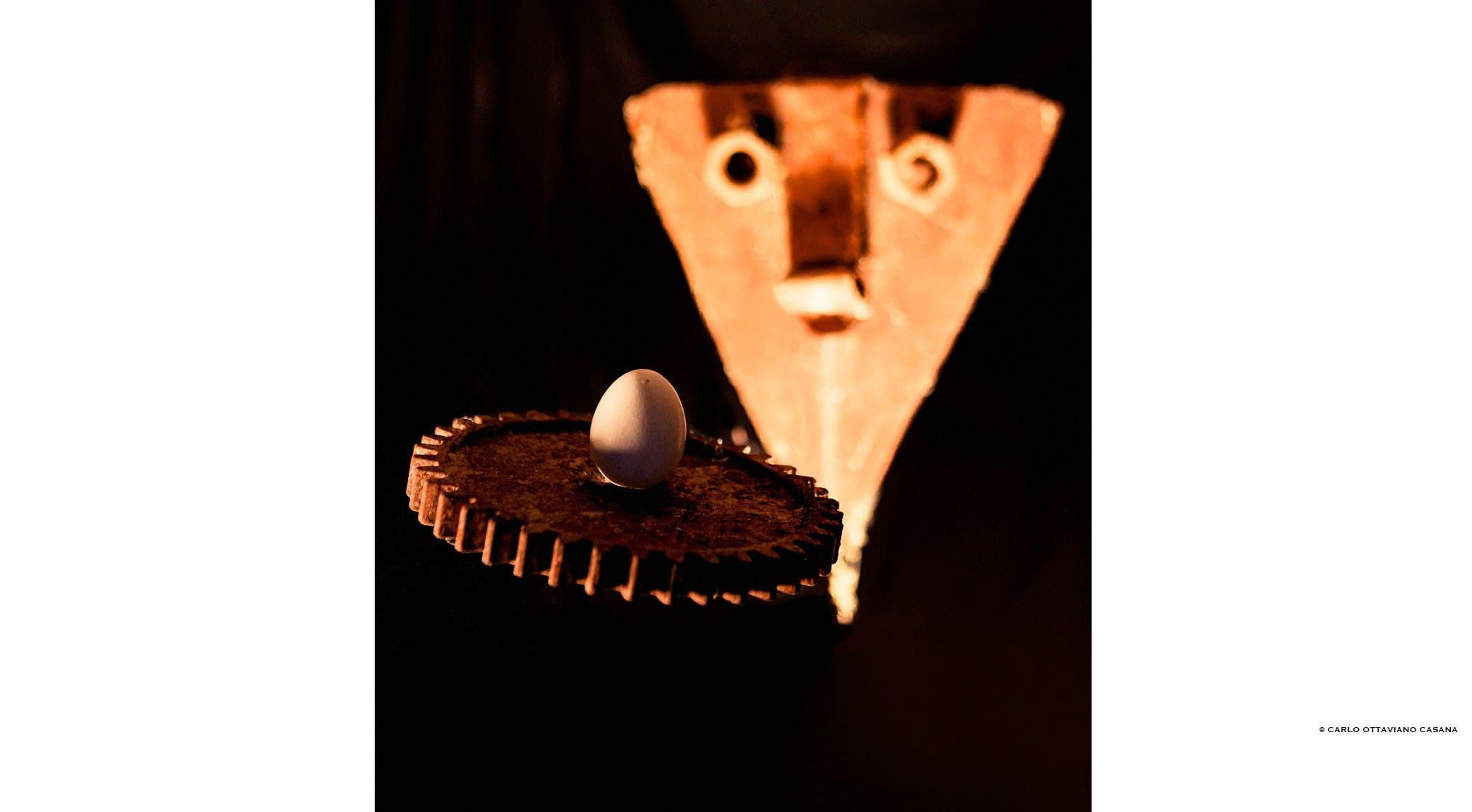 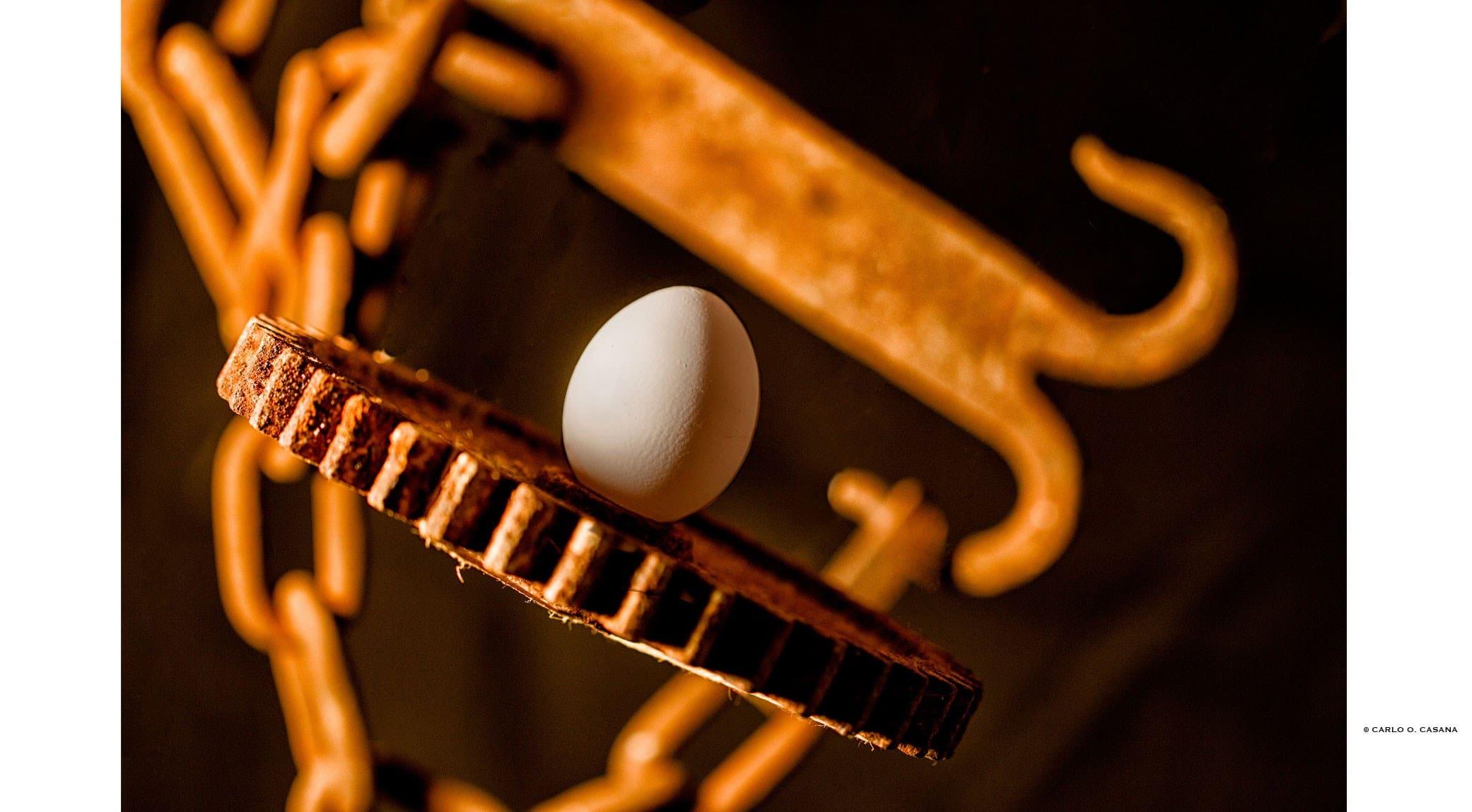 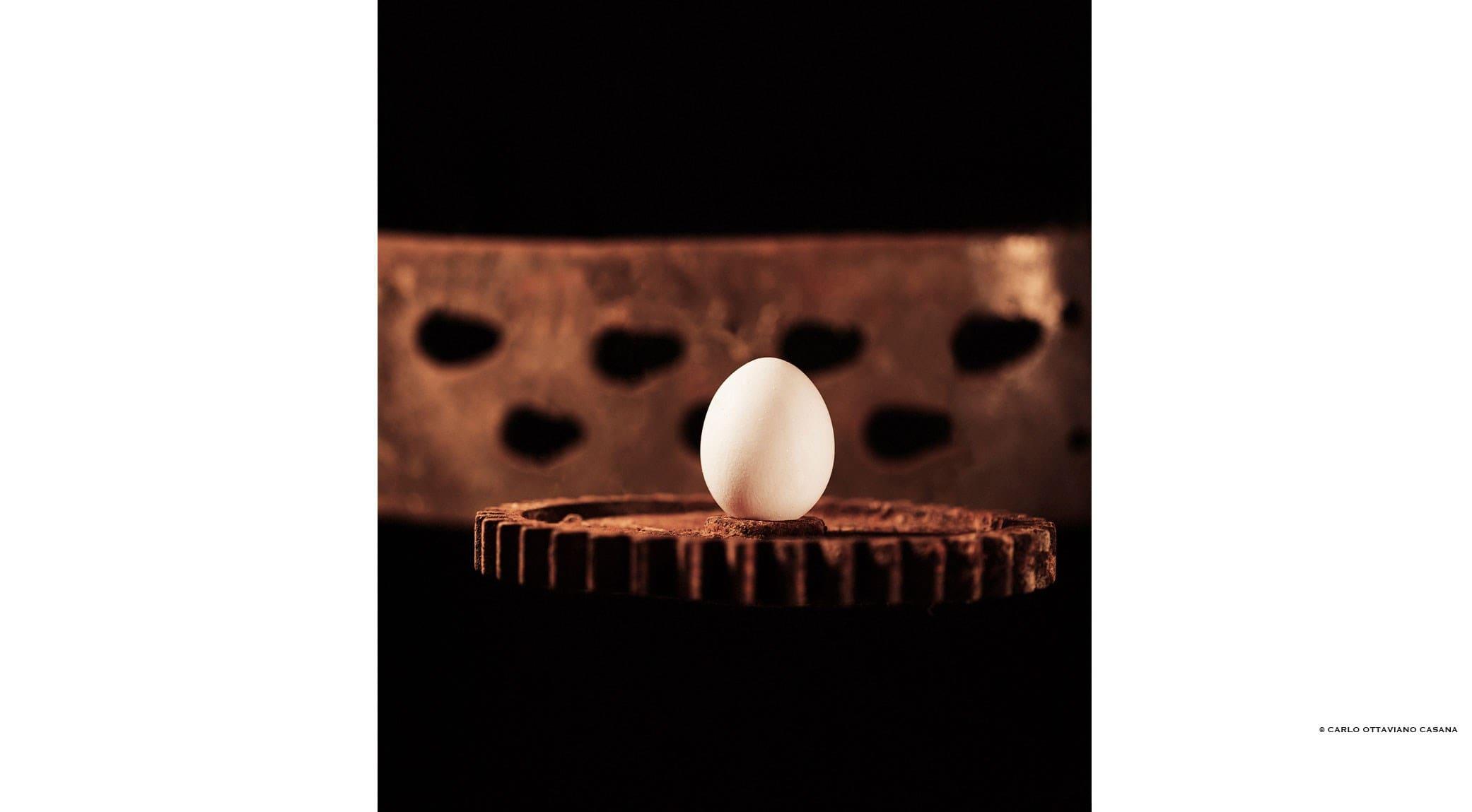 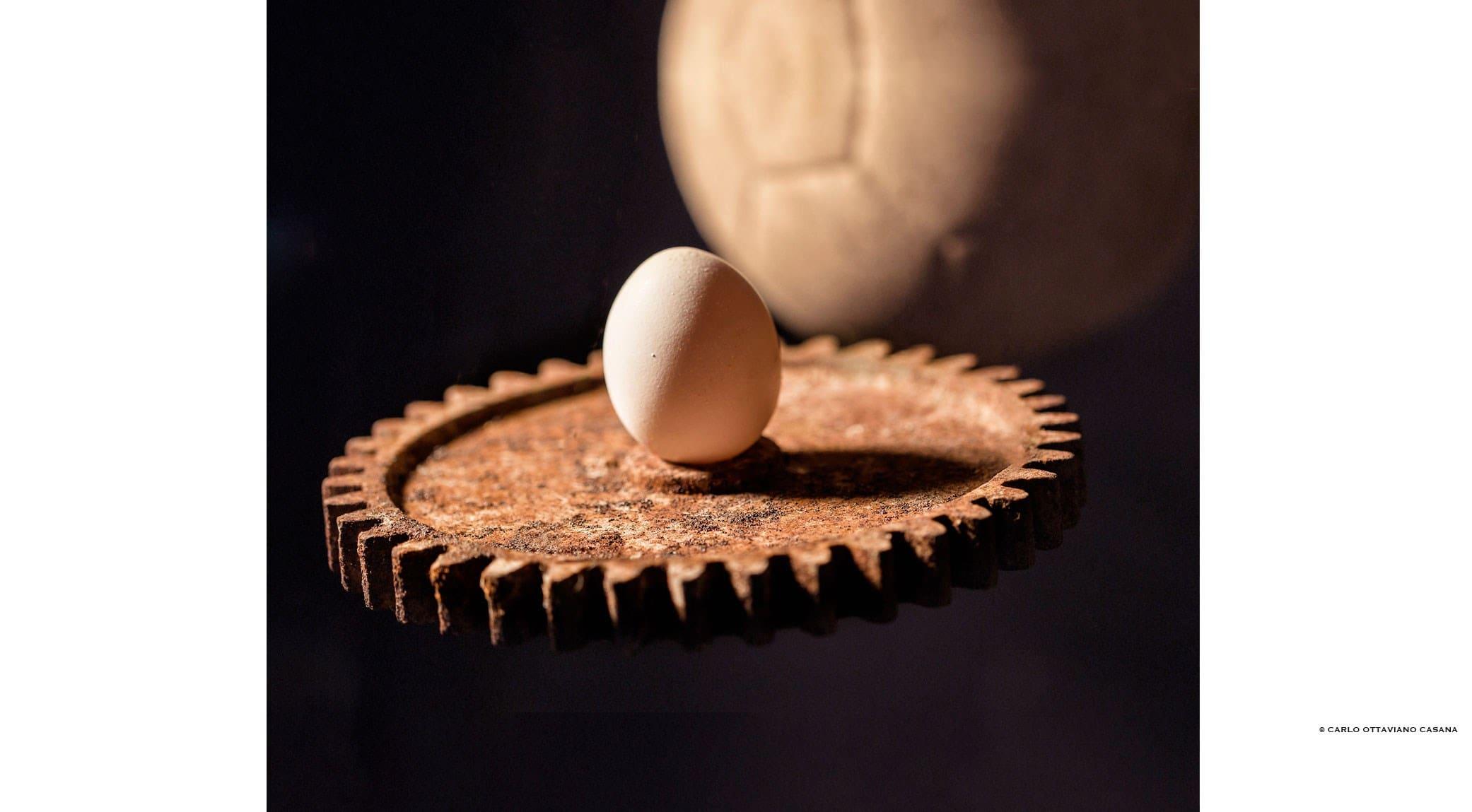 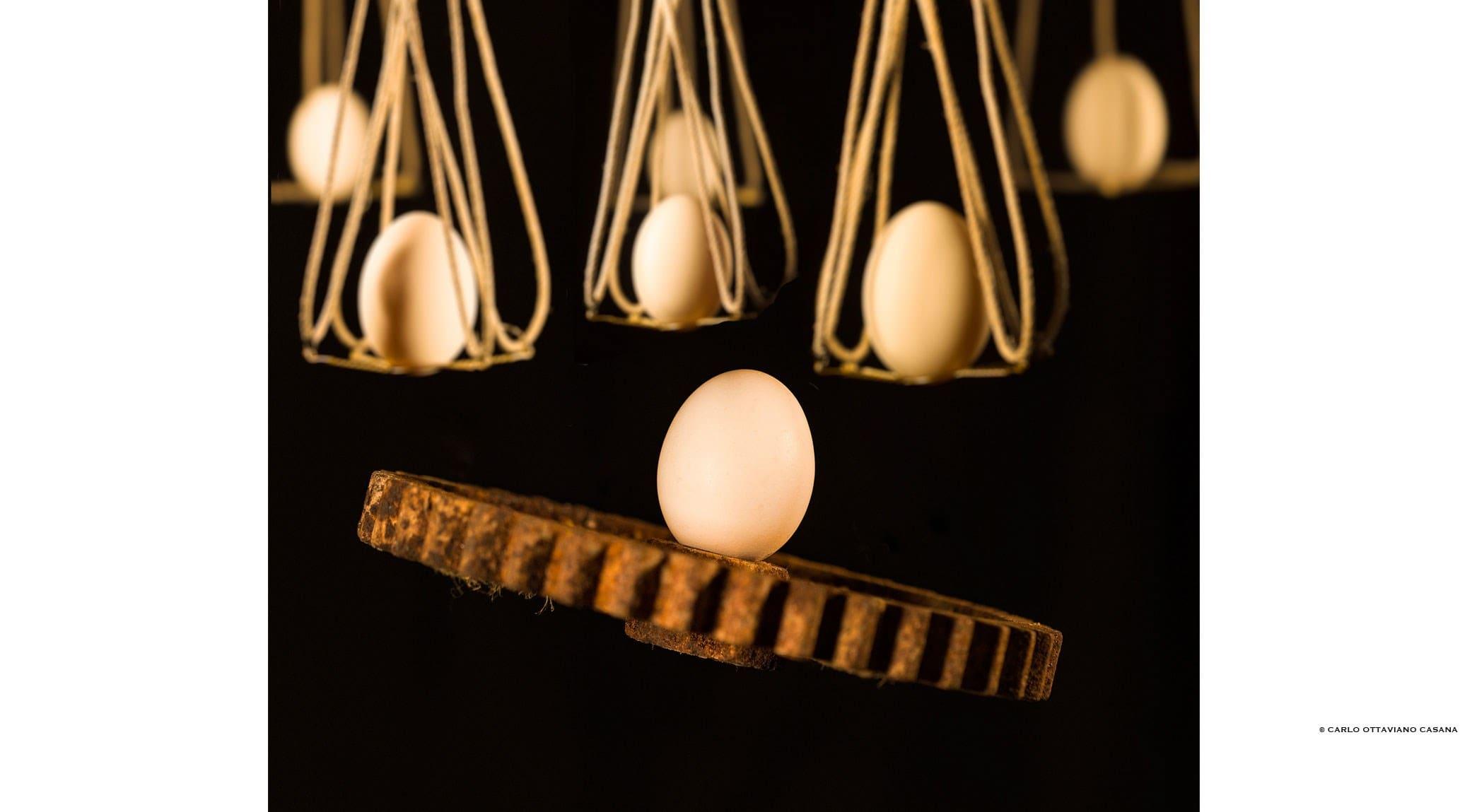 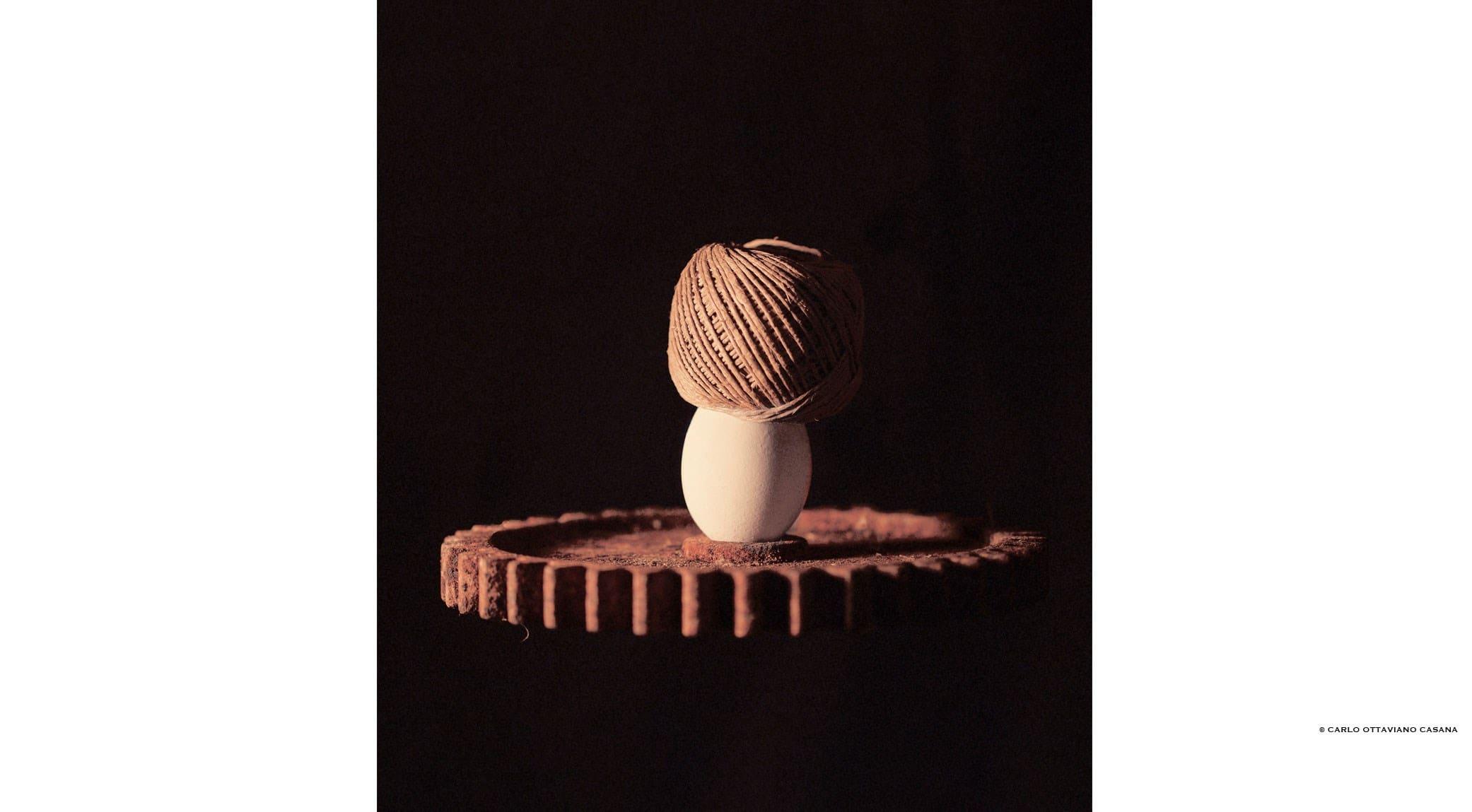 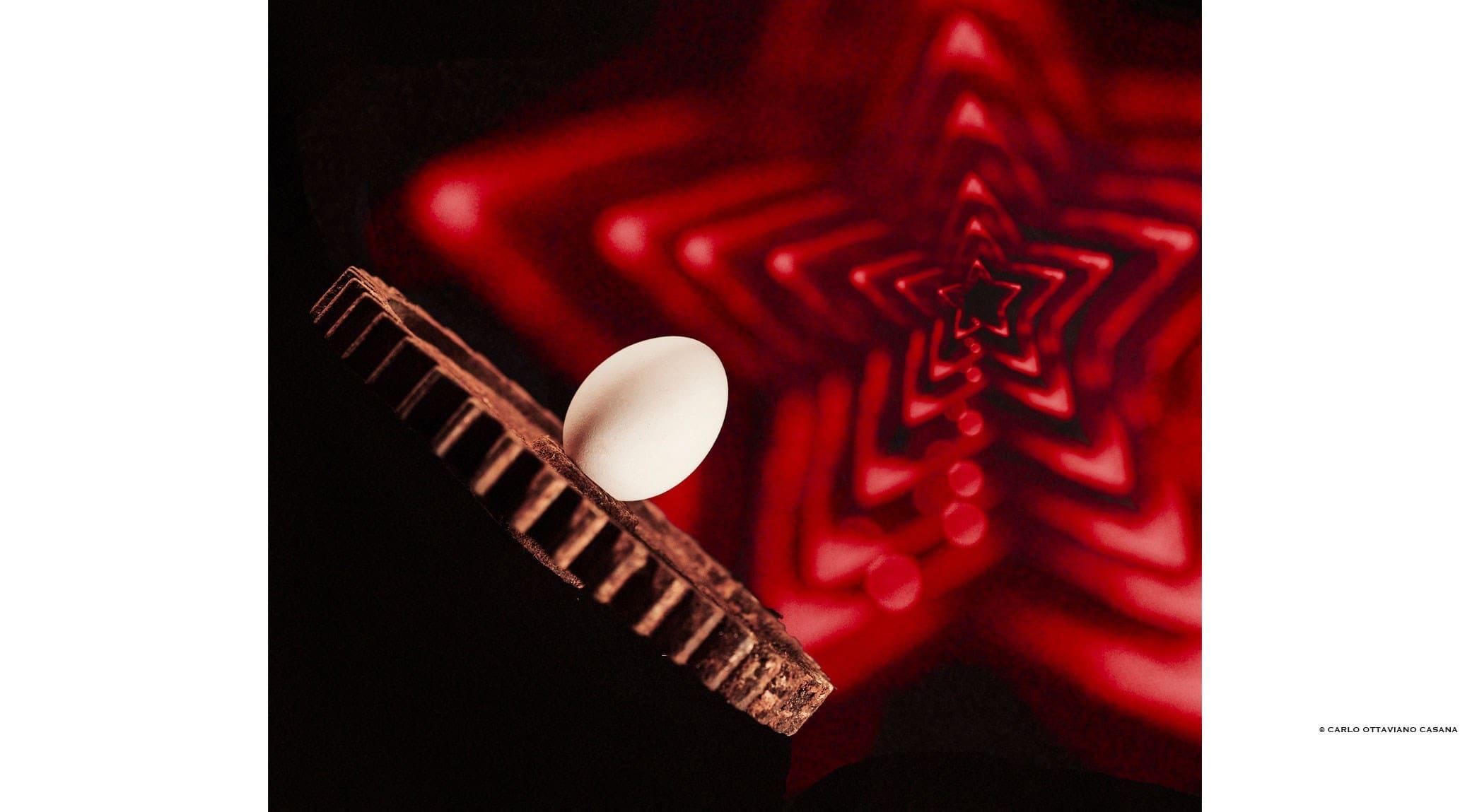 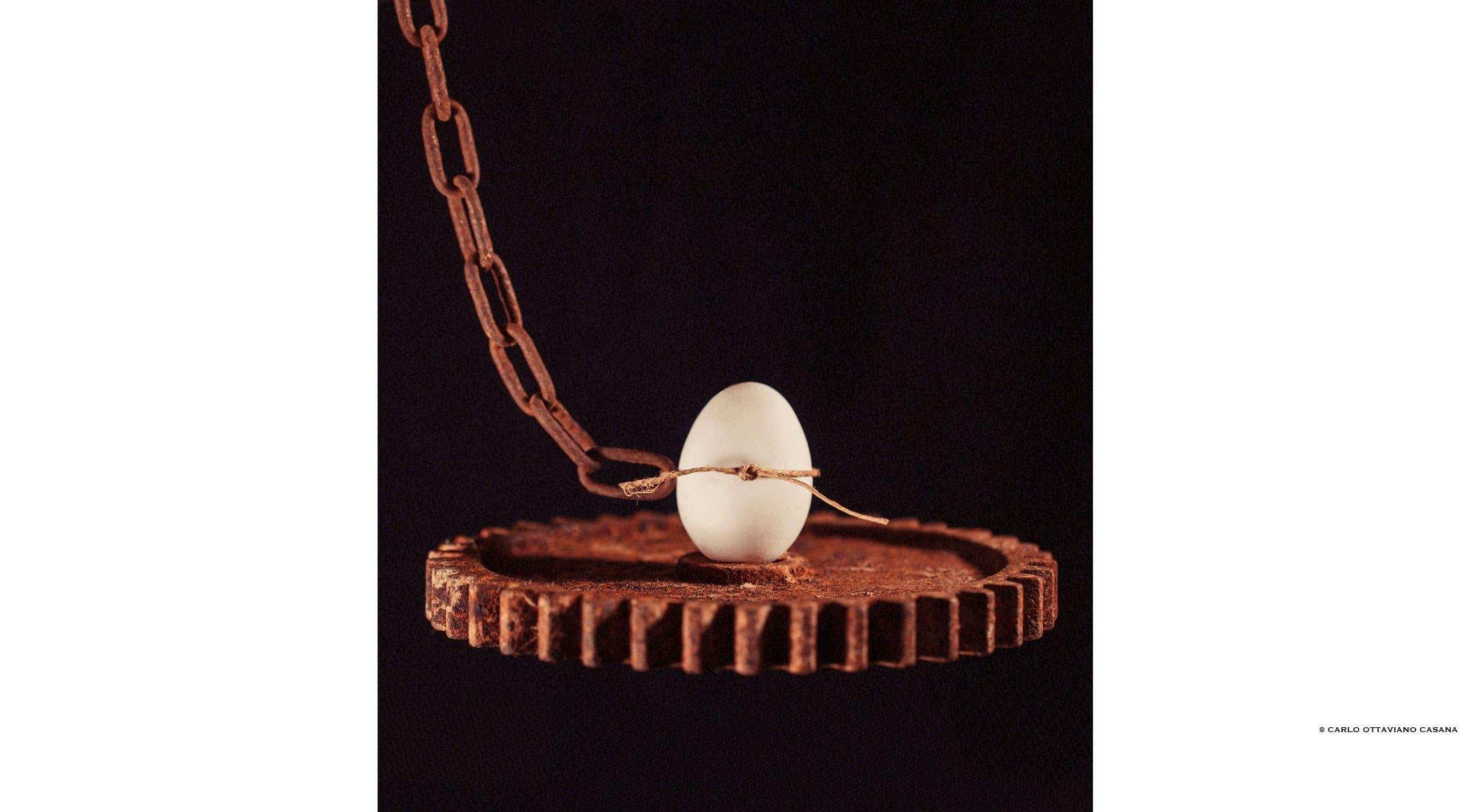 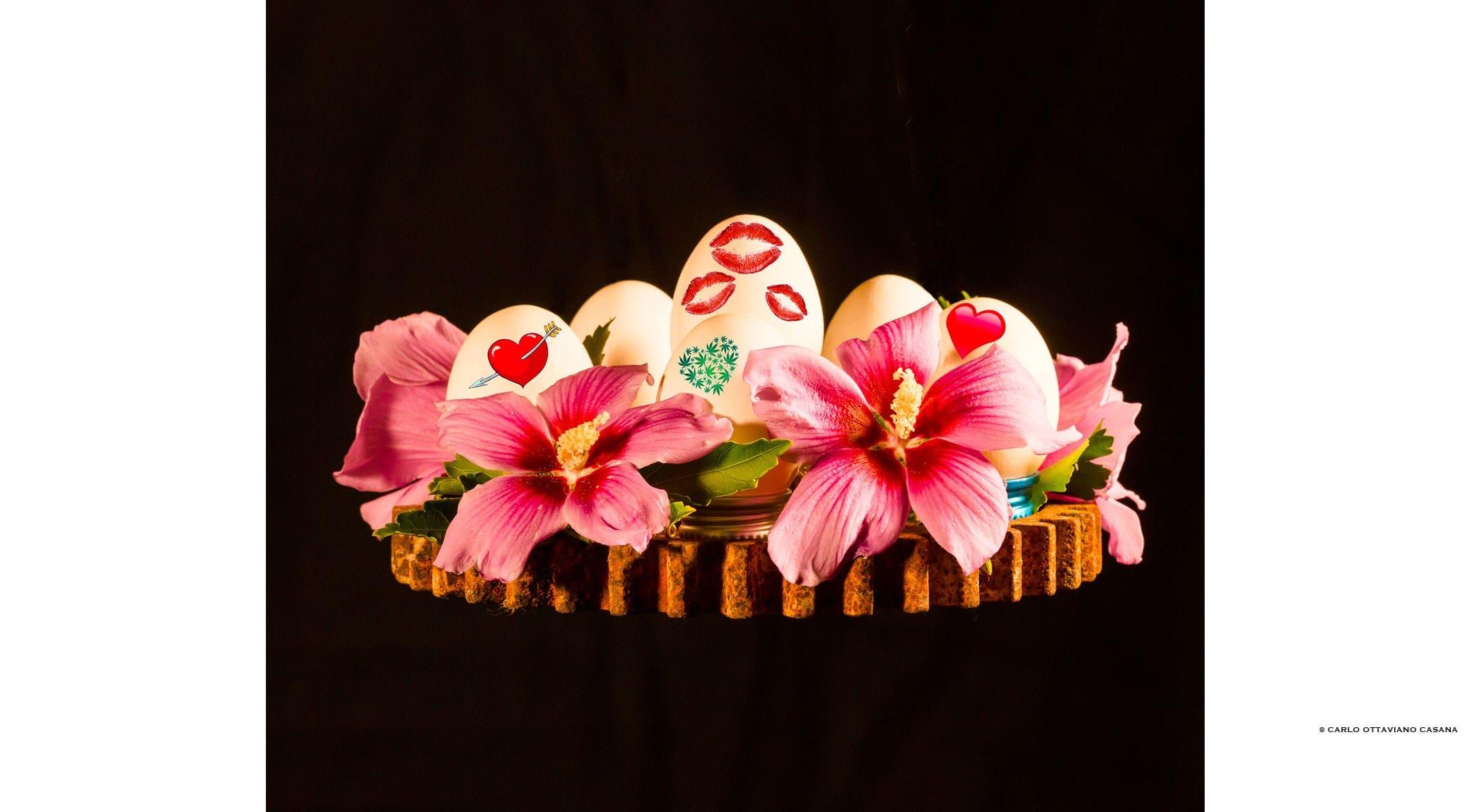 How would you describe your relationship – personal and professional – with food?
In Novedrate, in the country house in Como province I used to live in, great importance was attached to the entire ritual of eating: we ate for pure pleasure, never for a mere question of nourishment. My father was a renowned gastronome and like many gastronomes of the time, he had never cooked anything in his entire life. He was an expert on the theory and techniques of cooking but the practical side was delegated to our cook Vincenzo. Every day, they drew up the menu together, which consisted of three or four courses. When my father died and Vincenzo went to work elsewhere, I took over the kitchen: in a few years, I became quite a dab hand among the pans, saucepans and various utensils. Now I am able to cook almost all the family recipes, which amount to nearly 10,000. Very often, thanks to this collection, I happen to remember with pleasure the people who dropped in to see us or episodes from a distant past.

What's the first taste you remember and why?
There is no early flavor I remember in particular. I believe this depends on the fact that there was such an abundance and variety of them on hand every day... If I think back, however, I remember that when I was a very small child, after walking in the garden with my mother, we always passed by the vegetable plot where I used to pick tiny carrots when in season and ate them once they had been washed in the drinking fountain. A lost aroma and flavor.

Close your eyes and think of fine dining: what do you see?
Many images come and go as if my mind were a kaleidoscope: dishes, tables, and then everything comes to a standstill. About ten years ago, I was not far from Prabang, the ancient capital of Laos, on a dirt road crossing a forest close to the banks of the Mekong. A wood hut, without any sort of signage, acted as a small restaurant: there I was served with the best dish of pan-tossed rice spaghetti and vegetables I have ever tasted.