As part of our Iconic Dishes series, where we look at different chefs and the dishes, styles and techniques that have come to define them, we turn our attention to the 2018 Nobel Peace Prize nominated chef José Andrés.

With the mountain of work that Andrés has achieved over his 30 year career, it is almost impossible to define this culinary icon. He is a successful chef and businessman with more than 15 restaurants across the US and Mexico, but he is also an advocate, philanthropist and artist, who has won almost every award there is for a chef to win.

His signature restaurant is the two-Michelin-star minibar, in Washington DC, which celebrates its 15th anniversary this year. This is the place where Andrés, with the help of his strong team and head chef Jorge Hernandez, combine tradition and avant-garde technique in an innovative tasting menu that is all about experimentation and above all, fun. It is here that you see his artistry as a chef, and his mastery of modern gastronomy he first tasted during his training with Ferran Adrià at elBulli in the late ‘80s. 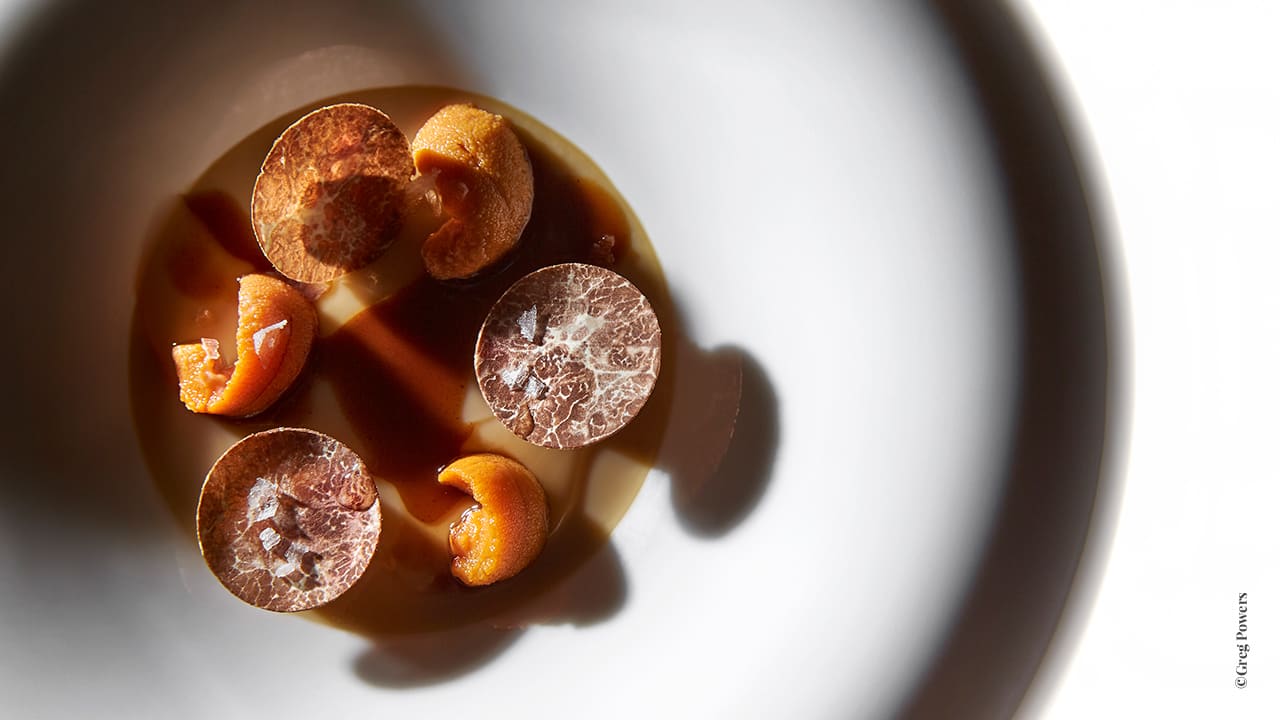 Dishes at the intimate 12-seat restaurant are created as a result of a deep research and development process where the team is empowered to experiment widely, for as long as it takes, to perfect new ingredients and techniques. It’s how dishes such as snail eggs with tapioca, a fragile pimpkin tart made of frozen pumpkin oil, liquid olives (clearly influenced by his elBulli training) and carbonated mojito spheres come to being. Nothing is quite like it seems at minibar, much to the delight of his diners.

With all that said, take a look at some of the inventive dishes from the chef's’ highly acclaimed restaurant.

Rosette of beet, Greek yogurt, mandarin orange, marigold flowers. A savoury, crispy, snack inspired by the use of rosette moulds that are traditionally used in sweet applications. Santa Barbara spot prawn, leche de tigre sphere, phytoplankton, and nasturtium petals. Visually representing a nasturtium flower, this dish creates a ceviche as the guest eats by breaking the sphere and releasing the acidic leche de tigre sauce to ‘cook’ the spot prawn every so slightly. The nasturtium adds a pepperiness to the dish. Check out this video by What Took You So Long for even more minibar goodness.

Discover the 'Five Cs' for building strong and efficient restaurant teams from an expert in team psychology, as part of our Better Business series.
You may also like
Article
Nashville Hot Sauce with Honey
Article
The Eight Best Cocktail Garnishes and How To Use Them
Article
Sous Vide Chicken Breast
Article
OAD 100+ Best Restaurants in Europe 2022
Jose Andres

José Andrés: "We Knew How to Fix The Problem"