I dedicate this work to all free women aware of their beauty who do not let themselves be influenced by imposed stereotypes.

Eat Me! is a series of photographic works by artist Angela Lo Priore, focused on the relationship between body and food. Women are the main subject of the photographs, but the scenic design also plays an essential role: real elements create a short circuit to create surreal images in which women are strongly featured.

In Angela Lo Priore’s images there is a patent reference to fashion and advertising photography, albeit deprived of its aesthetic content, and to the poetics of surrealism. To quote Italian photography critic Walter Guadagnini, “Madame Yevonde may, in more than one way, be considered a sort of protective deity of this series”.

While waiting for the book Eat Me!, published by Skira with texts by Walter Guadagnini and Paola Jacobbi, due to be released in mid-September, Fine Dining Lovers asked Angela Lo Priore some questions about the project and her relationship with food.

How was the Eat Me! project first conceived?
Unlike Manichini, the previous project in which I worked with actresses and models – the protagonists of a glamorous environment – with Eat Me! I wanted to focus the attention on ordinary women, in whom the fear of growing old, the desire to remain forever young and the obsession with their own beauty are increasingly widespread. I adopt an exaggerated standpoint in the images in order to encourage women to regain an awareness of their beauty because they are increasingly influenced by an artificial stereotype. Everyone wishes to resemble the imposed model. 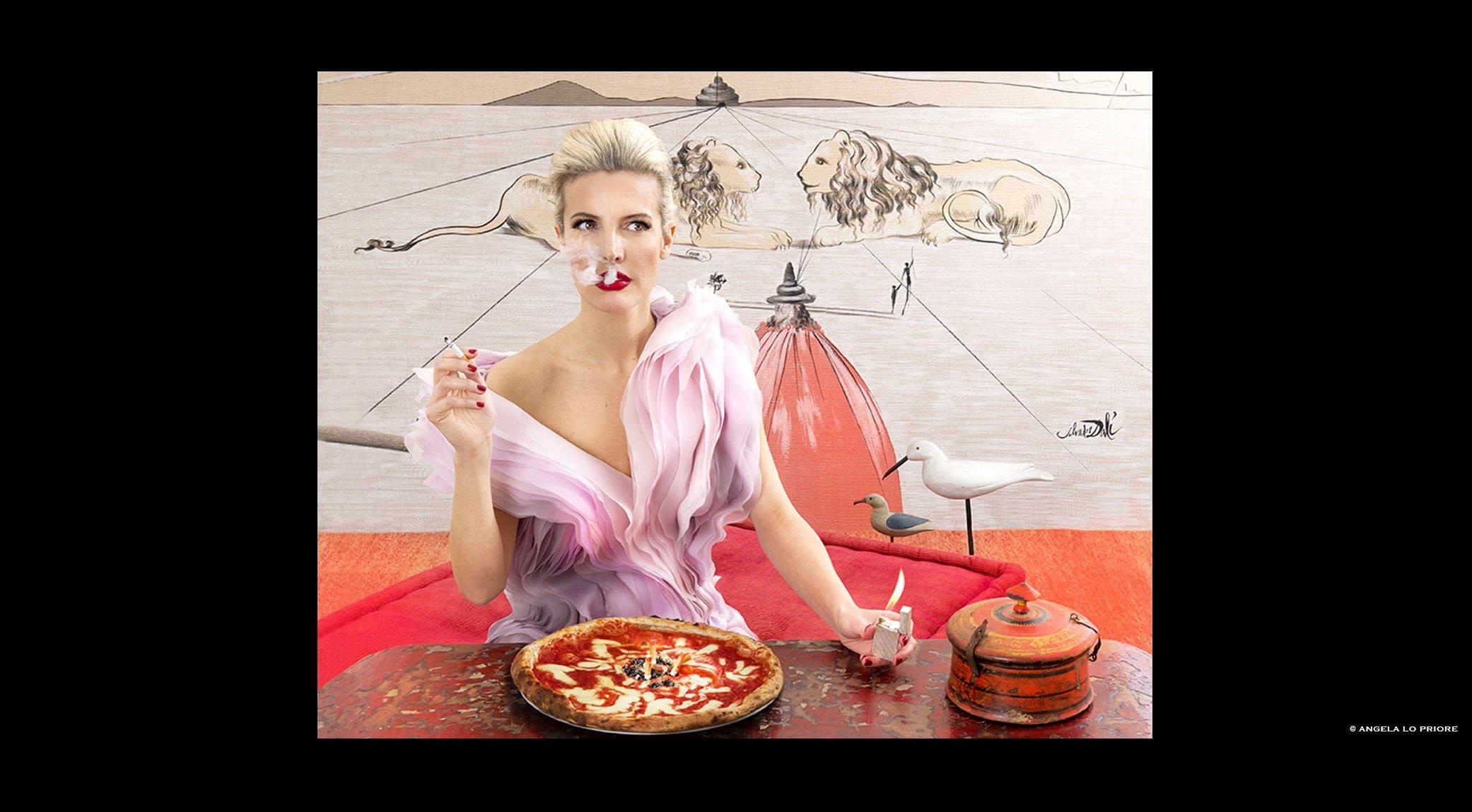 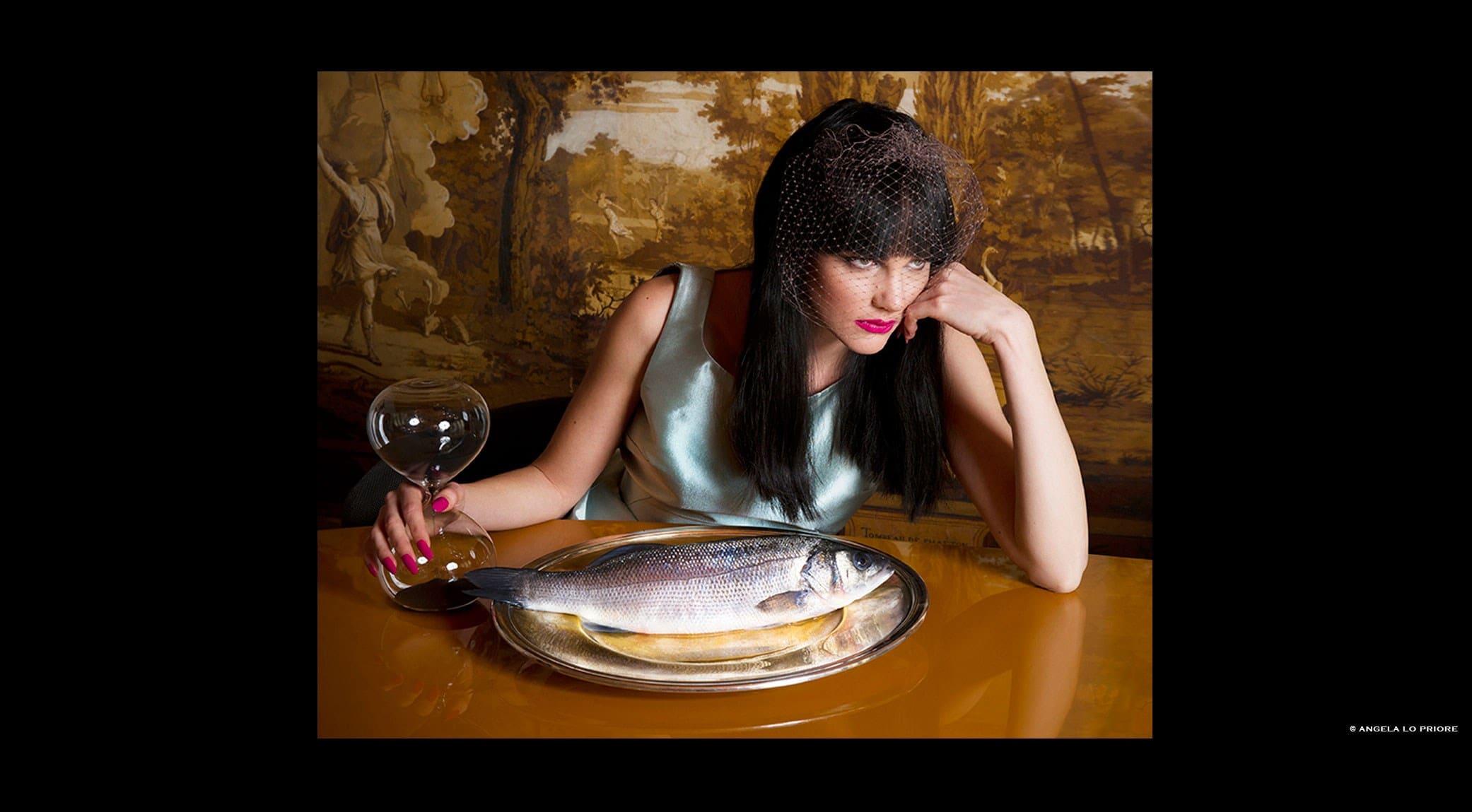 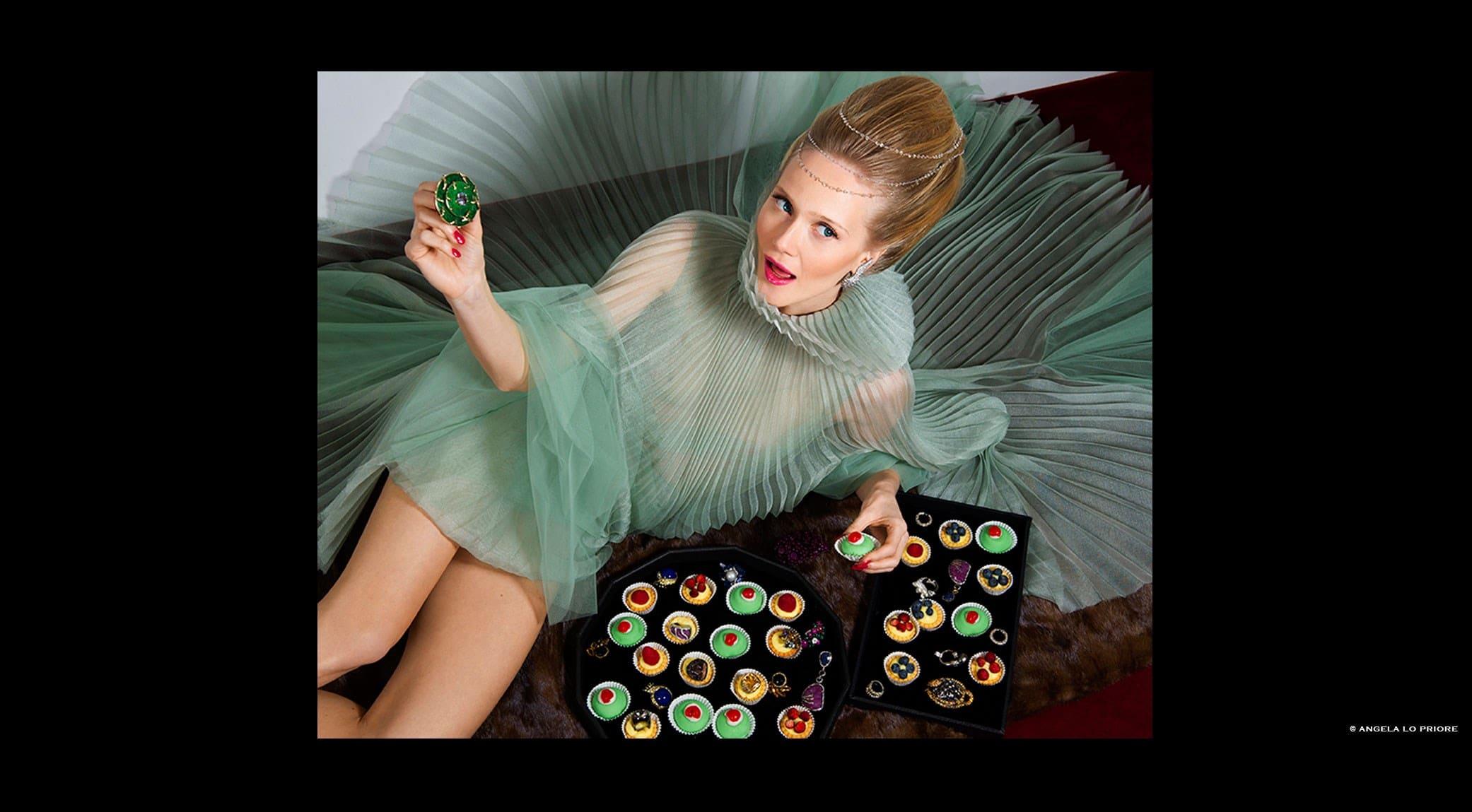 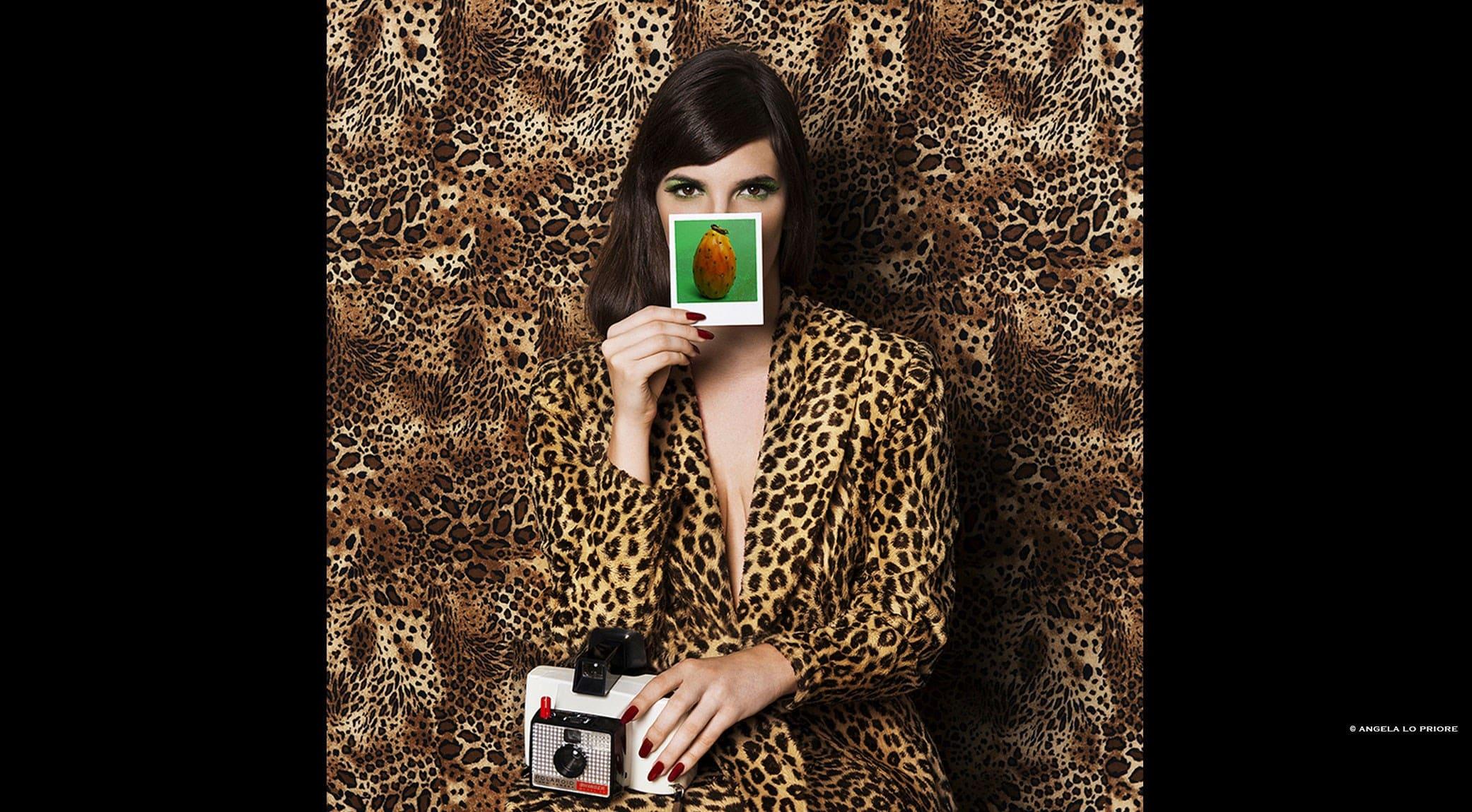 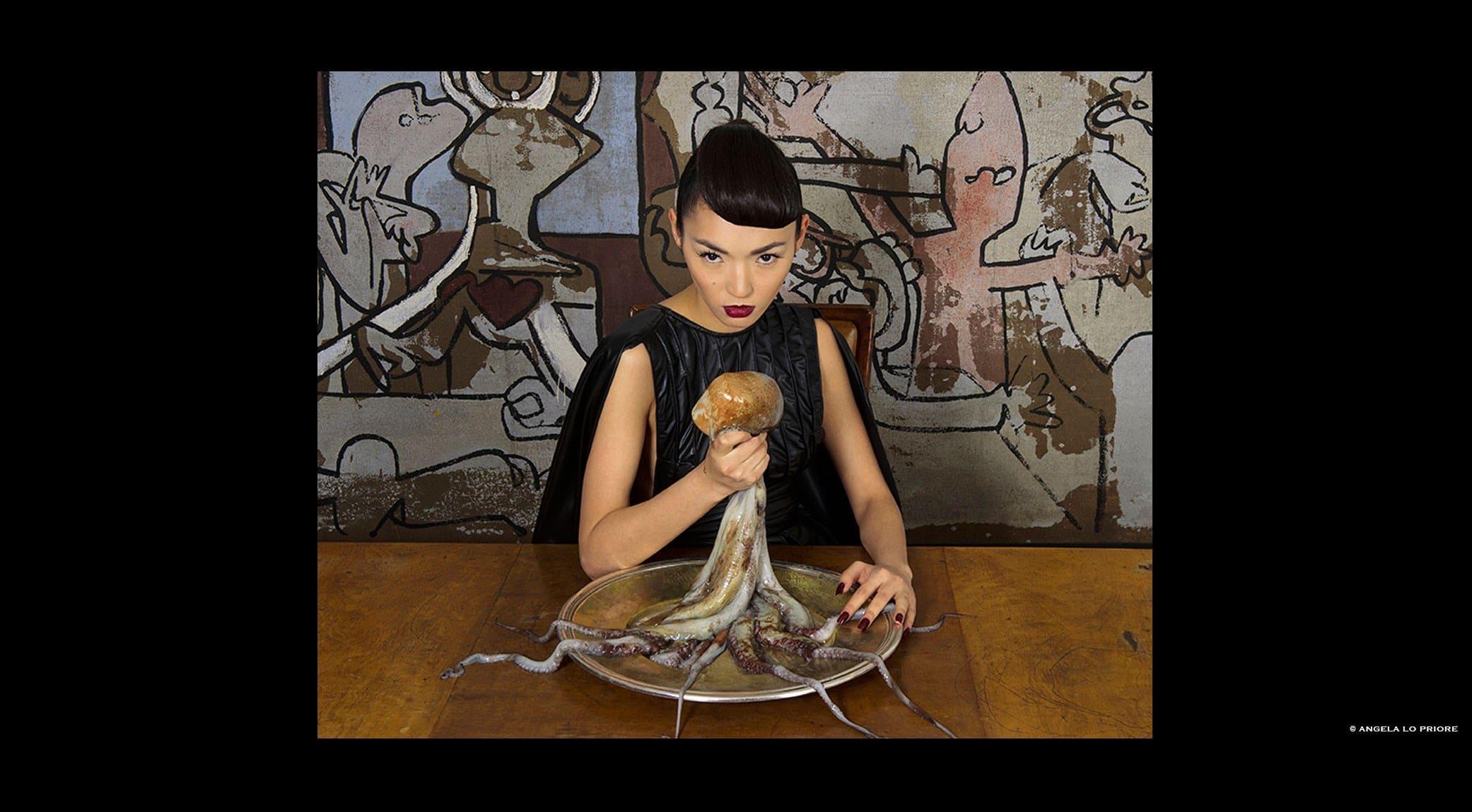 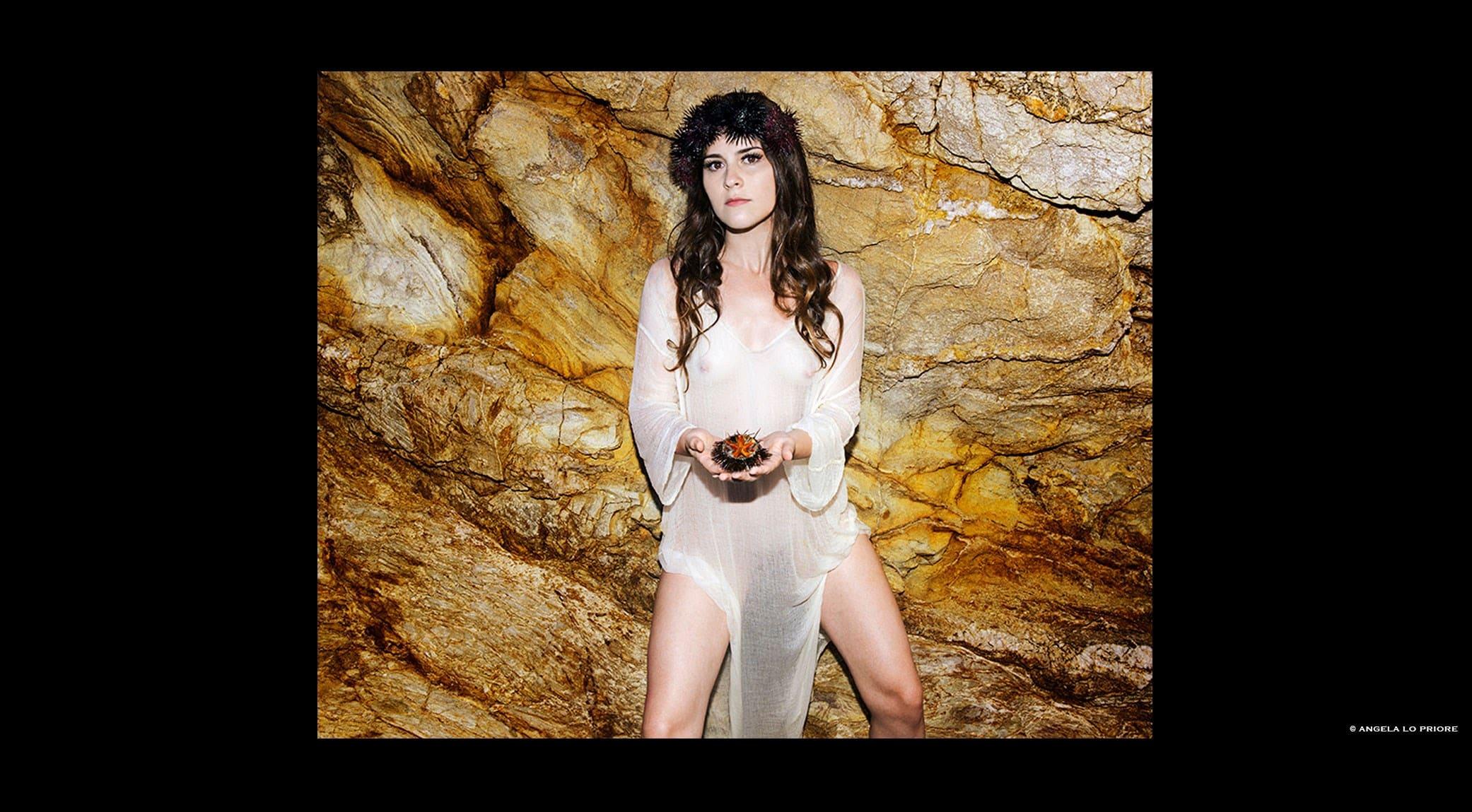 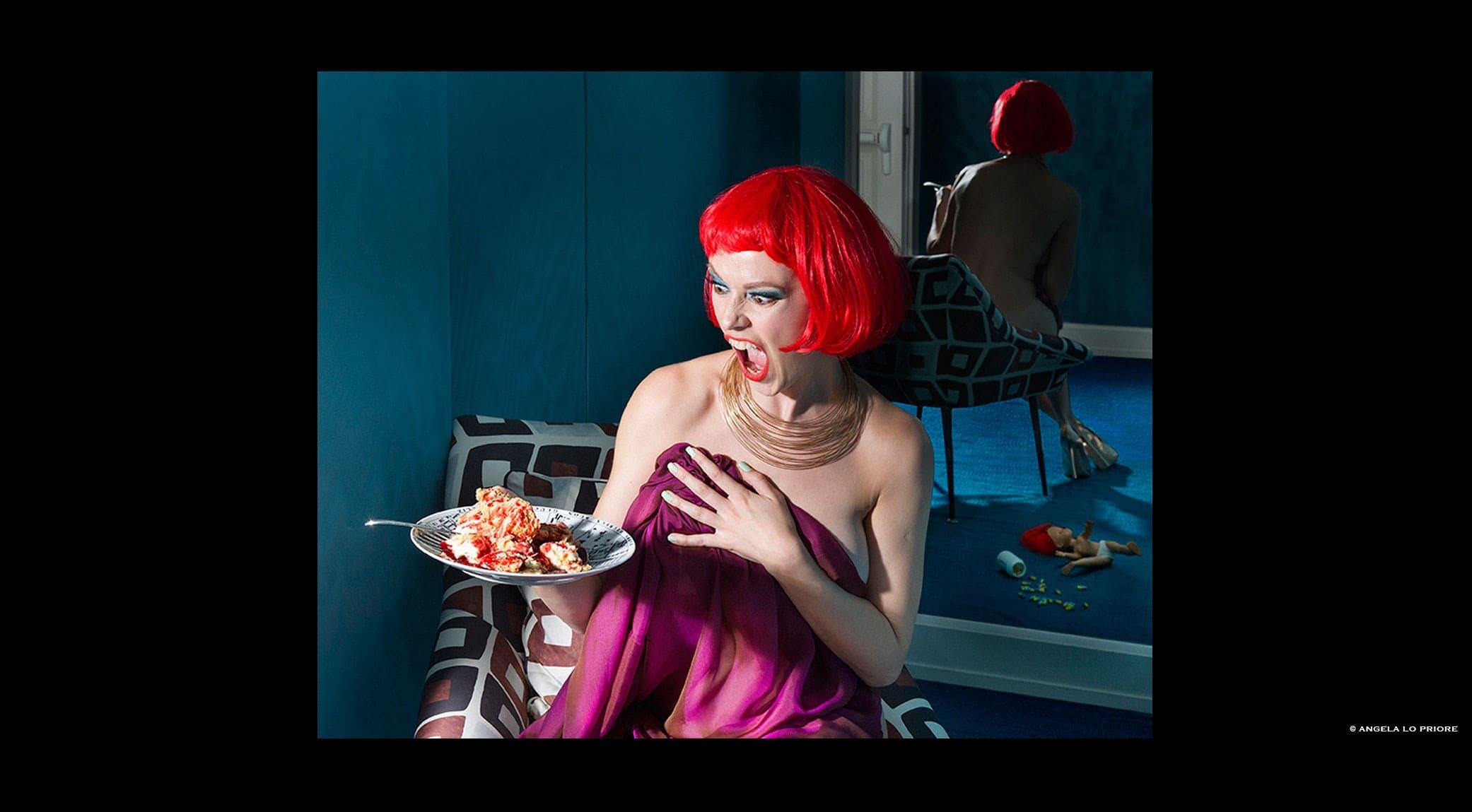 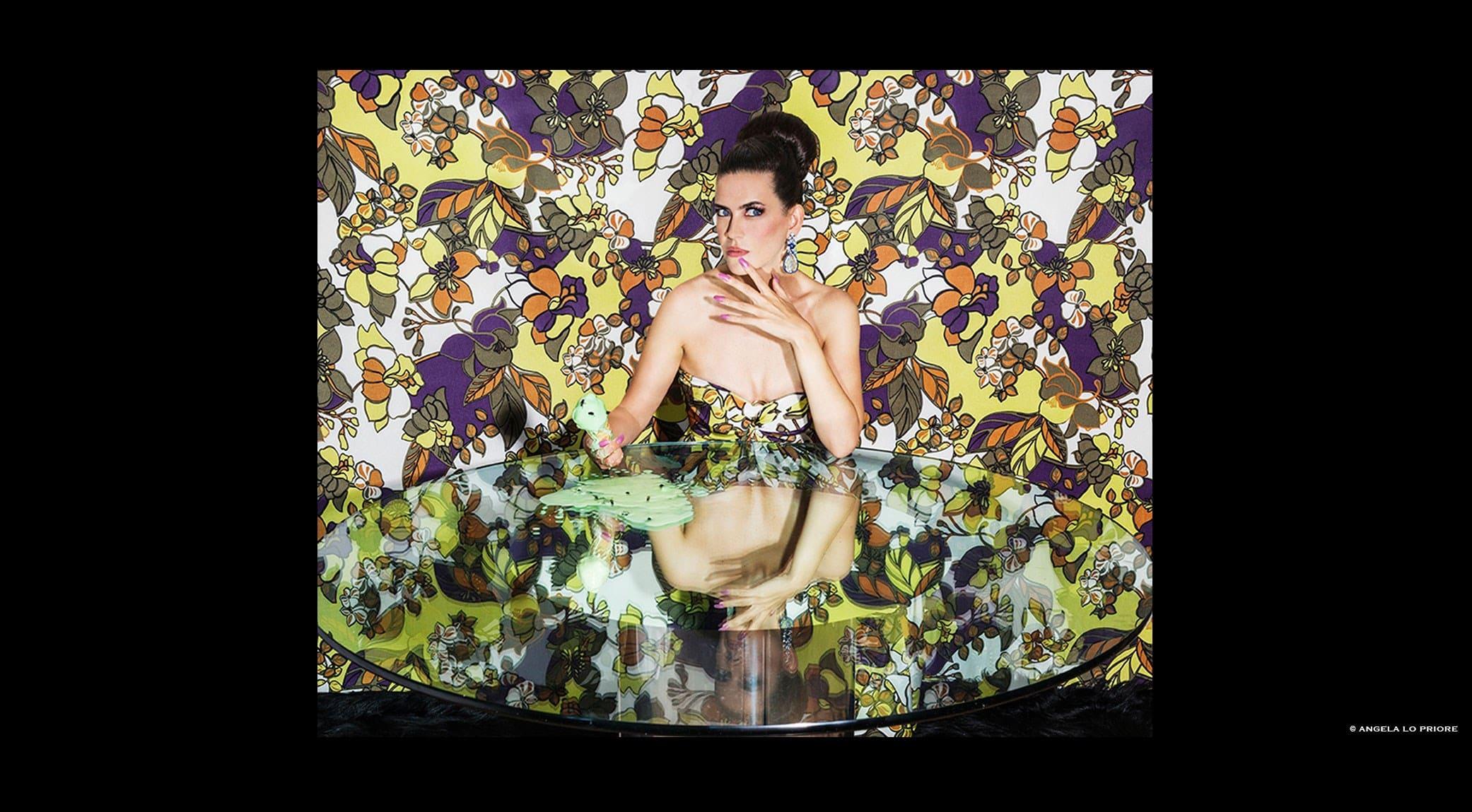 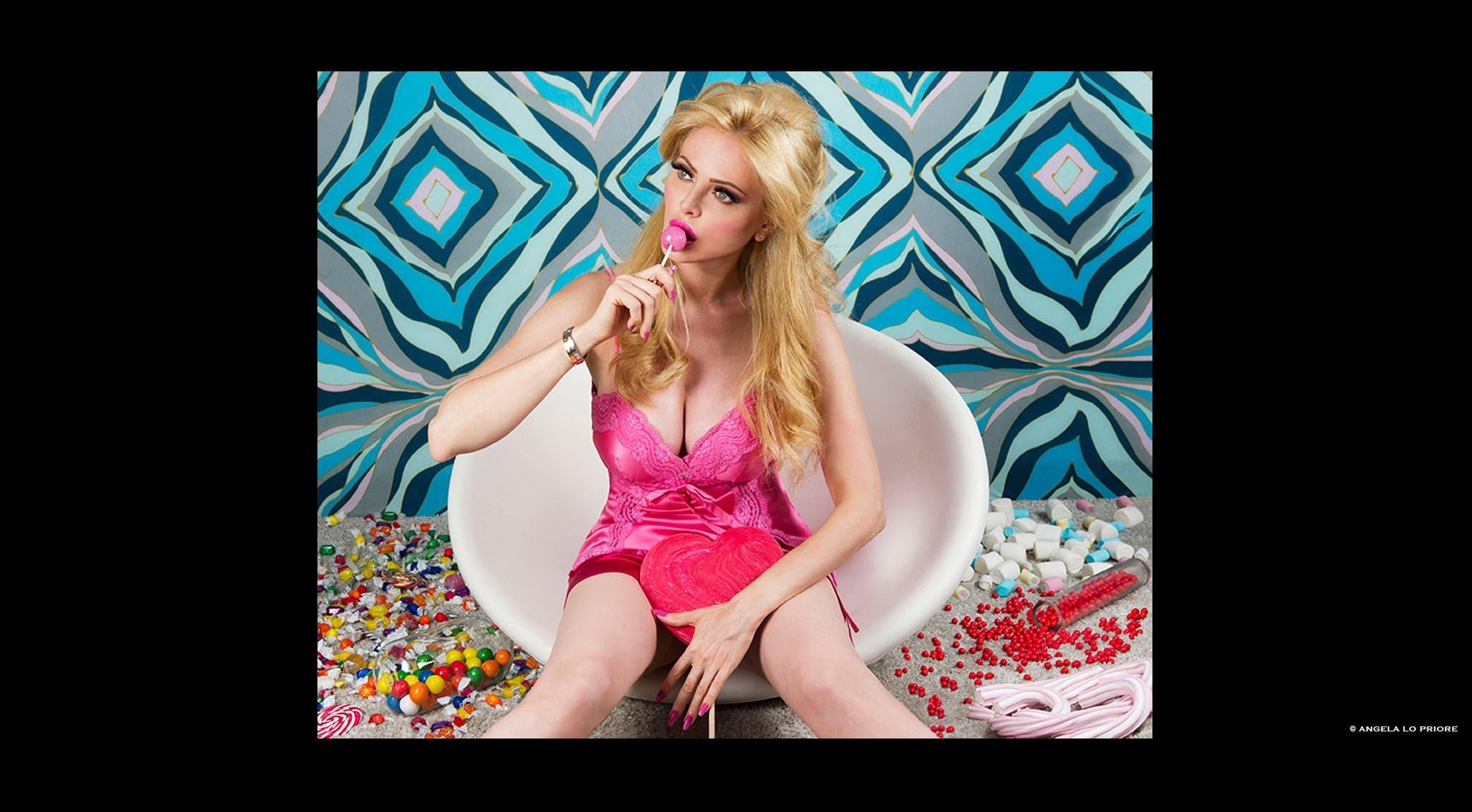 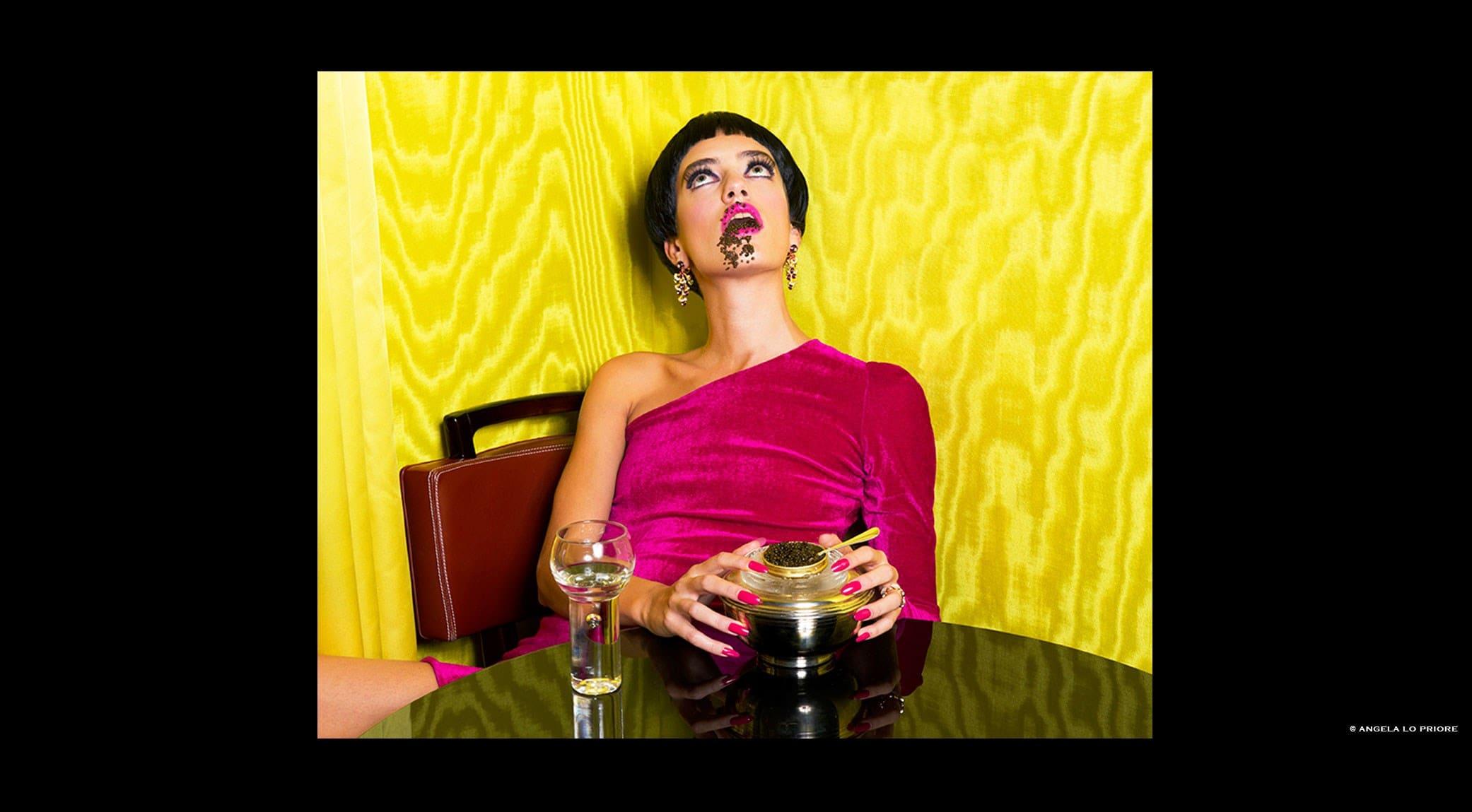 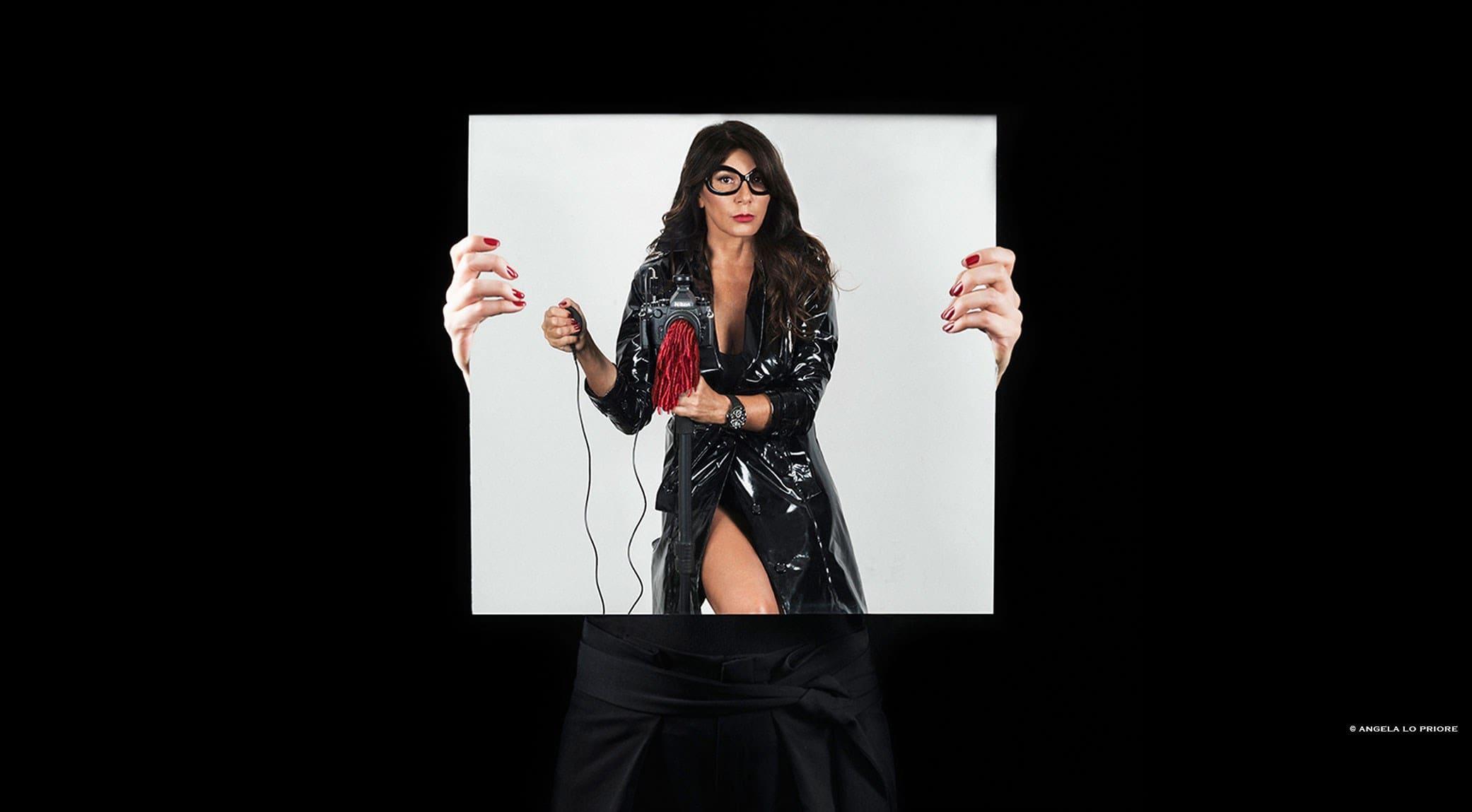 Women play an essential role in the image construction. How do you go about choosing your subjects and the specific foods?
I stumbled upon my protagonists quite accidentally. I was looking for women to photograph and I looked around among my friends and casual acquaintances. So, far from being models, they are just ordinary people. In some instances, the composition of the image is sparked by the type of protagonist I have chosen while, on other occasions, when I already have a clear idea regarding the set, food, and context, I look for the right woman to put in the scene. It is an ironic project in which there is also something of myself. Even though there is a strong bond between food and women, the act of eating is never actually shown. The food never gets eaten.

Do you identify with the idea that your photography recalls “the poetics of surrealism”?
Yes, surrealism is the artistic movement I identify with most. It’s the period I like best. The purpose of art is to make you take off, to give you the chance of a wider interpretation. The world of dreams melded with that of reality. The protagonists of surrealism have enchanted with their imagination. My use of color is inspired by surrealism, but also by pop art. Mine is a kitsch image, aimed at making an impact on the beholder.

What is the first flavor you remember and why?
I am fond of certain aromas and flavors of Apulia. As a child, I used to spend my holidays with granny and we ate bread, oil, and tomatoes for our afternoon snack. Mediterranean flavors.

Close your eyes and think about fine dining: what do you see?
A set table with lots of place settings. I come from a southern tradition. My grandmother used to cook and so did my mother. As a child, I used to smell the aroma of meatballs in tomato sauce for Sunday lunch. I come from a traditional family in which cooking and food, based on fresh, healthy products bought at the market, have played a fundamental role.

With its foamy head, the Clover Club cocktail is one of the most recognisable drinks. Find out how to prepare it and when it is best to serve it.
You may also like
Article
Valentine's Day 2023: Say it with a gourmet gift
Article
The Bear Season 2: Here’s what we know
Article
Flat white vs latte: all the differences
Article
Bocuse d'Or 2023: All the platters and plates
Food Photography